The CCP rewrites history in order to justify its repression of Tibetan language and culture. 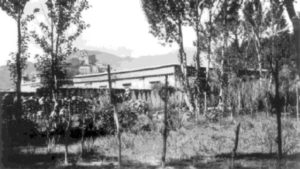 The Gyantse English School in the mid-1920s (Credits)

In March 2019, coinciding with the 60th anniversary of the Tibetan National Uprising, the Chinese government released the so-called white paper, a self-congratulatory document titled “Democratic Reform in Tibet – Sixty Years on.” In the document, the Chinese government compared the socio-economic and political conditions of independent Tibet and the present situation under the Chinese colonial rule.

One of the chapters, entitled, “Solid development in education,” highlights the numerical data of schools and students in Tibet. However, the ground reality is quite different from the purported propaganda of the Chinese government pertaining to the status of education in Tibet. Preservation and promotion of the Tibetan language are discouraged, and often such cultural initiatives are criminalized without evidence by linking them with political activism.

In April 2019, Chinese authorities detained a Tibetan student after an essay he wrote for his civil service exam lamenting a declining number of government job opportunities for Tibetans in Tibet. This went viral on social media, according to sources. The Tibet Education Bureau in China arrested the student in his school.

Sonam, the author of the essay, focused on the decline of job opportunities in the government sectors for young Tibetan graduates. He was trained in Tibetan language (master degree) but he had to write the civil service exams’ essay in Chinese. This is concrete evidence of the denial of freedom to use Tibetan language and status of job opportunities for Tibetan graduates under the Chinese education system in Tibet.

In 2015, Tibetan language advocate, Tashi Wangchuk, was sentenced to 5 years of imprisonment for speaking against the Chinese government’s denial of the so-called rights to minority language (Tibetan language) under the Chinese constitution. Many young Tibetans, including Wande Khar and Chagmo Kyi, immolated themselves in Tibet demanding their rights to preserve Tibetan language.

The latest White Paper, while comparing Tibet before and after occupation, fails to mention the destruction of thousands of monasteries and other learning centers, which were the repositories of invaluable Tibetan classical texts. Tibet had one of the highest numbers of texts published in the world before the Chinese forces destroyed them during the occupation and the Cultural Revolution.

Lhasa, the capital of Tibet, is the location of the three biggest monasteries in Tibet. These monasteries produced hundreds of thousands of scholars. Sera had 5500 monks, Drepung had 7700 and Gaden 3300. Today, these great monasteries have only a few hundred monks. The Chinese government is imposing severe restrictions on the recruitment of new monks in the monasteries all over Tibet. 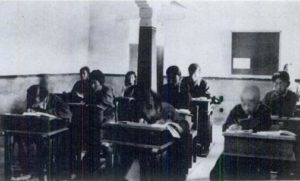 A classroom at Gyantse English School in the 1920s (Credits)

The White Paper blindly mentions that in old Tibet education was a privilege of the aristocracy. Monks who were enrolled in the thousands of monasteries existing across Tibet were lay Tibetans, most of them not from aristocratic families. According to a traditional Tibetan saying, “If a mother’s son has potential, there is no ownership of the Gaden throne.”

Beijing always reiterates the lack of modern schools in old Tibet. Such a statement may ring true, given the limited number of modern schools in old Tibet, but it is not entirely accurate. In fact, Gyantse English School was established in 1924 (see Shakabpa Wangchuk Deden Tsepon, One Hundred Thousand Moons: An Advanced Political History of Tibet, edited by Henk Blezer, Alex McKay and Charles Ramble, vol. 2, Leiden and Boston: Brill, 2010, p. 809). A similar English school was also established in Lhasa in 1944 (see L.  Sergius Kuzmin, Hidden Tibet: History of Independence and Occupation, edited by Andrey Terentyev and translated from Russian by Dmitry Bennett, St. Petersburg: Narthang, 2010, p. 149).  There were several other modern schools in Lhasa before 1950.

Lastly, the Chinese government used many strategies to legitimize its occupation of Tibet. The propaganda of economic development and modernization of Tibetan society are such maneuvers, to mention but a few.  China’s education policies in Tibet are intended to sinicize Tibetans gradually.  The protection of the Tibetan language and its culture is not only about Tibetans in Tibet. Proper access to the rich and profound Buddhist philosophy and epistemology is possible only through the Tibetan language. If Beijing continues to adopt the same policy towards Tibetan culture and language, it will only exacerbate Tibetan resistance against the Chinese government and CCP leaders. Before it is too late, the Chinese government should think about protecting the Tibetan language, one of the oldest languages and culture that the world can treasure for the benefit of millions of people.

Karma Tenzin holds an M.Phil. in Political Science from Madras Christian College and is a research fellow at the Tibet Policy Institute. Any express or implied political judgment in the article is the author’s only. Bitter Winter confines itself to the field of human rights and religious liberty and does not take a position on political issues.