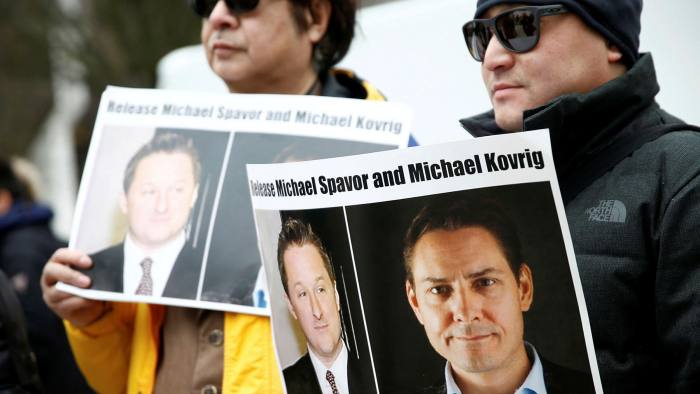 Use of foreigners as political tools increasing under Xi Jinping, say campaigners

The plight of two Canadians detained in China is a stark symbol of Beijing’s increased use of secret prisons and foreign nationals as political tools under President Xi Jinping, say human rights activists and former detainees.

Michael Kovrig, a former diplomat, and entrepreneur Michael Spavor are among almost 30,000 people who have been held in the facilities from 2013-19, according to Safeguard Defenders, a human rights group co-founded by Swedish citizen Peter Dahlin, who was himself held in a secret prison.

Activists and former diplomats are urging the international community to maintain an assertive approach to Beijing, arguing that quiet diplomacy has proven ineffective.

The Canadians were detained in December 2018 following the arrest in Vancouver of Meng Wanzhou, chief financial officer of Huawei and daughter of the telecom group’s founder. Ms Meng was held after the US issued an extradition request over alleged violations of sanctions against Iran and has been living under house arrest since 2018. Huawei has asserted that she is innocent of the charges.

Mr Kovrig and Mr Spavor have spent six months in secret prisons under a programme started in 2013 known as “residential surveillance at a designated location” and were only allowed to meet consular officials once during that time.

They have been charged with espionage but the Canadian government has described the arrests as arbitrary and compared China’s approach to hostage taking.

Meng Wanzhou, finance chief of Huawei, at her home in Vancouver where she is under house arrest © Reuters
China’s confinement of foreign nationals as a political tool stretches back decades.

“It’s been nearly 50 years since I was held, and 50 years later we’re having the same thing again,” said Anthony Grey, a British journalist who was held under house arrest for two years from 1967.

Mr Grey was one of a dozen UK nationals detained following the arrest of a group of Chinese journalists in Hong Kong, who were alleged to have violated emergency regulations during violent protests and riots in the city, then under British rule. Mr Grey was released after several of the Chinese journalists had served their jail sentences.

China has also arrested citizens of Australia, with which it has had fraught relations in recent years. Most recently, Beijing detained Cheng Lei, a journalist who worked for Chinese state television, in August, after Australian intelligence staff raided the homes of Chinese journalists in the country.

Individuals detained on national security suspicions are typically held under RSDL for up to six months. Safeguard Defenders says about 400 people were taken into detention in 2013, the first year the programme was launched, increasing to more than 6,000 in 2019. It says detainees are abused psychologically and tortured, with tactics including keeping lights on in cells continuously and sleep deprivation.

Chinese police can detain people for long periods without evidence outside of the RSDL system. In 2013, corporate investigators Peter Humphrey, a UK citizen, and his Chinese-born American wife Yu Yingzeng were held for almost two years, while police tried to force them to confess to a variety of crimes. They denied all allegations.

“We have a new rising power which is acting as a bully, and is building up an inventory of prisoners who become bargaining chips in its negotiations with countries on almost anything,” said Mr Humphrey.

China’s supporters see its actions as commensurate with other countries’. Ren Zhengfei, founder of Huawei, believes the charges against his daughter are politically motivated and has recommended the book The American Trap by Frédéric Pierucci, a French former executive at power group Alstom, about his jailing on extraterritorial corruption charges in the US when General Electric was trying to take over part of the French company. Mr Pierucci has alleged that Washington uses extraterritorial laws to attack countries competing with US strategic industries.

Foreign governments are loath to give in to Beijing’s demands but also want to maintain good relations with the world’s second-largest economy.

“I don’t think quiet diplomacy works with the Chinese Communist party. Quiet diplomacy depends on the two parties having a shared set of values,” said Roger Garside, a British diplomat in Beijing at the time of Mr Grey’s arrest. “That means respect for the rule of law and norms of international diplomatic behaviour. The CCP under Xi’s leadership has demonstrated it rejects any notion of universal values.”

Anthony Grey, centre, was held under house arrest in China for 2 years from 1967 after a group of Chinese journalists were arrested in Hong Kong © Michael Webb/Keystone/Hulton Archive/Getty Images
Mr Grey recalls that when he was arrested, he wished the UK would offer up what the Chinese authorities wanted. But “it’s blackmail” he said, adding that he would not advocate for Canada to put aside the rule of law and release Ms Meng.

Harrison Li, the son of Kai Li, a US citizen detained in China on national security grounds in 2016, backs the robust approach. “If governments don’t speak out on this issue and don’t try and tackle it head on then it is only going to continue,” he said.

For now, supporters are focused on maintaining awareness of the Canadians’ plight.

Charlie Parton, a former British diplomat and now at RUSI, a security think-tank, spearheaded the #FreeChinaHostages campaign, urging people to send Christmas cards to the detainees to Chinese embassies worldwide.

“One aim is to show the world the nature of the beast. Despite propounding ideas of win-win and shared humanity, the Chinese Communist party is an unpleasant organisation,” he said.

After Mr Grey’s release, he was told that sackfuls of Christmas cards had been delivered to China’s foreign ministry in a similar effort — but had been burnt.

“I don’t know that any of these cards would reach the two Michaels in prison, but I know that I was very deeply moved by the fact that people cared enough to write cards to me, and I think they would be moved too,” he said.