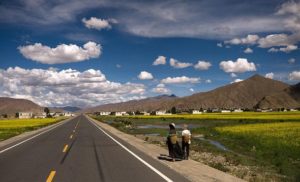 China’s economic development policies in Tibet were proposed to perform multiple tasks. For instance, the economic development policies are not only aimed at improving income and the living standard of Tibetans but are also aimed at ensuring regional stability and national security. The high economic growth rate that Tibet has achieved over the years plays a significant role in legitimizing People’s Republic of China’s (PRC) rule and control over Tibet, especially while addressing international criticism. The core theme of China’s numerous white papers on Tibet is on the economic development of Tibet under the PRC, according to Dolma Tsering, a research scholar at JNU.

For China, Tibet holds a strategic significance in relations with countries that borders it. Tibet was a playground of the Great Game between Tsarist Russia and Great Britain. George Ginsburg and Michael Mathos highlighted Tibet’s strategic importance in their work: “He who holds Tibet dominates Himalayan piedmont; he who dominates Himalayan piedmont threatens the Indian subcontinent, and he who threatens the Indian subcontinent may well have all of South Asia within his reach and, with it, all of Asia.” This strategy of China is seen as more visible ever with its strategic maneuver of embarking on, the One Belt and One Road (OBOR) in recent years.

When the Chinese communist troops occupied the eastern Tibet the roads construction projects followed immediately. The strategic development for more than two decades and the spectacular aspects of the overall development in Tibet since 1950 to 1976 has been all strategic or military oriented. Hence, infrastructure development of road building, construction of airports and railway lines are continuously pushed to connect all the isolated and strategic locations in Tibet.  This development is aimed to have efficient surveillance over the Tibetan people and safeguard Tibet’s borders.

The Chinese government has vehemently reasserted Xi Jinping’s key thought, “To govern the country well we must first govern the frontiers well,

and to govern the frontiers well we must first ensure stability in Tibet.” Hence, it further validates the significance of Tibet from the strategic point of view and reveals the true intention of China’s engineered development in Tibet. China’s fear of foreign intrusion through the backdoor of Tibet also pushed for strategic development. Hence, in order to avoid the two-front war, foreign intrusion in Tibet and Tibetan resistance against the Chinese government rule in Tibet, China needs to secure the stability in Tibet through an engineered development.

Like all states faced with separatist demands, the government adopts two strategies: increased surveillance to control the local population and pumping money into the affected areas to induce cooperation and compliance. These policies are problematic, as the increased economic development does not induce greater acceptance and the greater surveillance in the form of restrictions on movement and controlling cultural production has the effect of arousing a greater sense of Tibetan victimisation.

Nearly 160 Tibetans have self-immolated in Tibet under Chinese rule.  This testifies that so-called development is not happening on the ground and in fact, it remains another catalyst for the growing tools for suppression and oppression of the Tibetan people.

China’s geo-strategic infrastructure development in Tibet is also accompanied by rapid urbanisation. China’s urbanization in Tibet (and across the country) is aimed at a solution to China’s slowing economy. The policy is intended to bring millions of Chinese migrant workers to settle and do business in Tibet. As part of this process, Tibet’s cities have gone through demographic shifts, resulting in the strong influence of Chinese culture. The projected rate of 30 percent urbanization in Tibet in the coming few decades would mean that all cities in Tibet will be dominated by ethnic Chinese.

In short, the Chinese government’s engineered development in Tibet is security-centered to coerce compliance among the Tibetan people and it is also aimed at ensuring the regional and national security of China. However, to what extent the Chinese government invests in Tibet to develop the economy along with limited benefits Tibetans shares remotely, Tibetans will never give-up their sense of territorial rights.