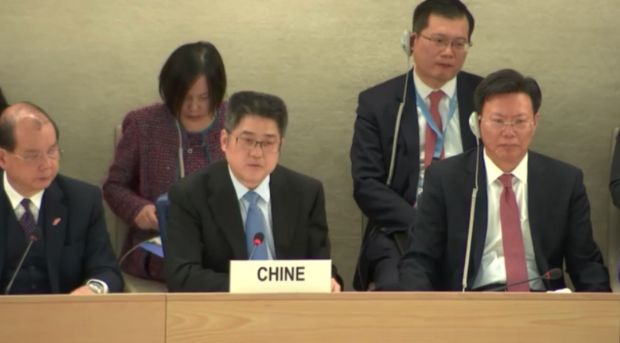 Geneva: On Friday, China’s Deputy Foreign Minister Le Yucheng led a delegation at the UN Human Rights Council (HRC), rejecting legitimate criticisms about the lack of basic human rights in Tibet and other regions in the country.

“Tibet enjoys stability and development, and people in Tibet enjoy [a] free and happy life,” Le claimed. “According to Chinese law, we protect freedom of speech and religious belief and other rights.”

Le’s comments on Tibet were made in his closing remarks as China completed its 3rd cycle of Universal Periodic Review (UPR) in Geneva. The UPR is a mechanism of the HRC which reviews the human rights obligations and commitments of its Member States every 5-years.

China’s responses to the UPR recommendations by the Member States raise serious doubts about its compliance and respect for the entrenched principles of the international human rights system.

It rejected recommendations involving providing unhindered access to Tibet to UN mechanisms, persecution on the basis of religion, freedom of movement, the right to peaceful assembly, and the rights of human rights defenders.

Recommendations involving the rights to freedom of religion or belief, resumption of two-way dialogue on Tibet, and respect for the human rights of Tibetans were indicated as “already implemented.”

“For Tibetans, it is utterly cynical to hear that Chinese government stated that recommendations which called for the protection of their rights are ‘already implemented’ and that ‘all its citizens are equal before that law,’” said Kai Muller from the Helsinki Foundation for Human Rights.

China made sure to cut civil society participation by placing many of its government-organized non-government organizations (commonly referred to as GONGOs) on the already limited NGO speakers’ list at the UPR adoption. Six Chinese GONGOS were among the first 10 list of NGO speakers to praise China’s human rights achievements.

For example, one of them was the China Association for Preservation and Development of Tibetan Culture (CAPDTC) which had a young woman claiming to be Tibetan and serving as the Chinese government’s mouthpiece.

“Over the years, the central government and the government of the Tibet Autonomous Region have worked together to preserve and promote traditional Tibetan culture and protect places of unique folk culture,” CAPDTC’s speaker said.

Such claims are contrary to the recent findings of UN Committee on the Elimination of Racial Discrimination which stated that rights of Tibetans, particularly language rights, freedom of movement and the issuance of passports, have “not been placed on equal footing in law, policy and practice with Chinese.”

John Fisher, Geneva Director of Human Rights Watch, took the floor and stated, “The many GONGOS who spoke before me illustrate that freedom of expression in China is enjoyed by government cheerleaders while dissenting voices are routinely suppressed.”

He also expressed serious concerns about the lack of accountability by China to the death of human rights defenders like Cao Shunli, Liu Xiaobo, and Tenzin Delek Rinpoche.

China’s practice of suppressing dissenting voices has been visibly clear throughout the UPR process which questions the integrity of the UN human rights system as a whole.

A joint submission uncovering China’s systematic human rights violations in Tibet was removed from the official stakeholder’s summary. This official summary is an important document prepared by the Office of the High Commissioner for Human Rights to assist the Member States as they prepare their recommendations for China.

Kunchok Dolma Yaklha on behalf of Society for Threatened Peoples said, “In order to realize the ultimate aim of the UPR mechanism to improve and address human rights violations wherever they occur, on-the-ground realities presented by stakeholders is crucial.” 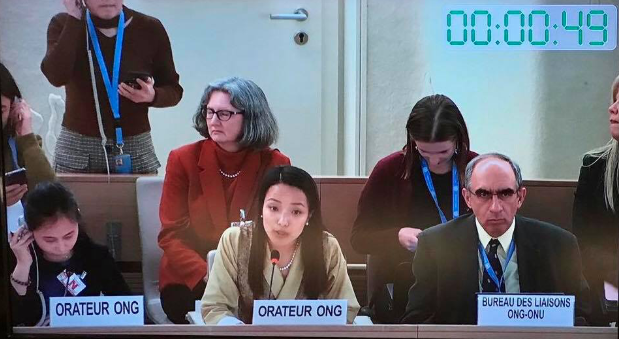 Kunchok Dolma Yaklha, on behalf of Society for Threatened Peoples, takes the floor at the general debate of the Universal Periodic Review at the UN Human Rights Council, 15 March 2019.

“For example, just two days before China’s UPR on November 6, 2018, a 23-year-old young Tibetan man named Dopo committed self-immolation in protest against China’s growing repressive policies—raising the total number of known self-immolations to 153 since 2009,” she added.

Yaklha reminded the Council that the UPR process is supposed to be conducted in a transparent manner and this calls for the HRC to provide some clarification on the submission procedure to ensure that all stakeholders can make their voices heard.

China’s third UPR has paraded the country’s growing influence at the UNHRC and the increasingly assertive role it is playing in silencing criticism of its deteriorating human rights records.