China Tightens its Grip on Dissidents inside and outside China 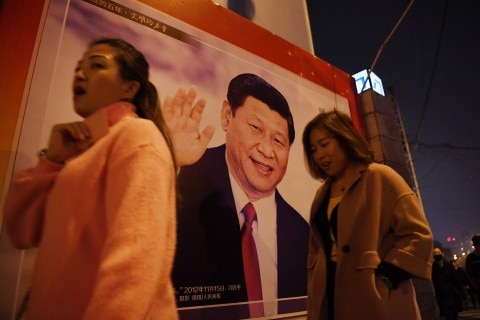 Women walk past a roadside poster of Chinese President Xi Jinping on Oct. 24

Dharamshala: China is considering handing out punishment ranging from removal of political rights to criminal detention and imprisonment of up to three years to those who disrespect the national anthem under a new rule that could be rolled out to Hong Kong.

A draft amendment was submitted on Monday for deliberation at the bi-monthly session of the National People’s Congress Standing Committee.

“As the criminal law stipulates penalties for offences to national flag and national emblem, violations regarding national anthem should also be incorporated with the passing of the new law,” Wang Chaoying, deputy head of the National People’s Congress Standing Committee’s Legislative Affairs Commission, said in a report to the session on Tuesday.

However, the strict new rules could ignite a reprisal in the former British colony where football fans have booed the anthem in recent matches, sparking fury from authorities and highlighting divisions between the city and the Chinese mainland.

Concerns are brewing in Hong Kong as they believe that China is slowly tightening its political grip on the city, that enjoys the freedom guaranteed in the “one country, two systems” rule.

The notion of China tightening its grip is not only foreboded by the citizens of Hong Kong but also by the Uyghurs living overseas and in China.

Uyghurs live primarily in the Xinjiang Uyghur Autonomous Region in the People’s Republic of China, where they are one of 55 officially recognized ethnic minorities.

In Xinjiang, the Uyghurs are restricted travel adding up to constant inspection of their cell-phones. According to The Globe and Mail, the Chinese authorities have installed an increasingly capable surveillance regime that employs facial recognition to track people.

The Chinese authorities have reportedly used forceful means in the form of threats relayed to the family members of the Uyghurs living overseas, to get them to return to China.

When they get back, they, along with numerous Ughyurs of Xinjiang are taken away for patriotic re-education camps in an attempt to rid them off political and religious beliefs that are deemed to be harmful and unnecessary.

China wants Uyghurs “closer to home, where they can be more carefully monitored,” said James Leibold, a specialist in Chinese ethnic policy at La Trobe University in Australia.

Enver Tohti, a Uyghur in exile in UK and a surgeon who has been outspoken in accusing China of persecuting Uyghurs., was invited to a coffee shop by a stranger.  The man knew about Mr. Tohti’s friends, recent travels, even his taste in literature as reported by The Globe and Mail.

The stranger threatened him by saying that him Enver campaigning for human rights was fine but he had now crossed the red line. Not knowing what the red line was, Tohti asked him if the red-line was drawn by the Chinese.

“If you continue your work, we cannot guarantee your safety in this country”, the stranger replied.

China’s rubber-stamp parliament, the National People’s Congress, under the leadership of Xi Jinping seems to be walking the talk when it said that it would act tough on regions eyeing independence and its intolerance to anyone who stands in its way.