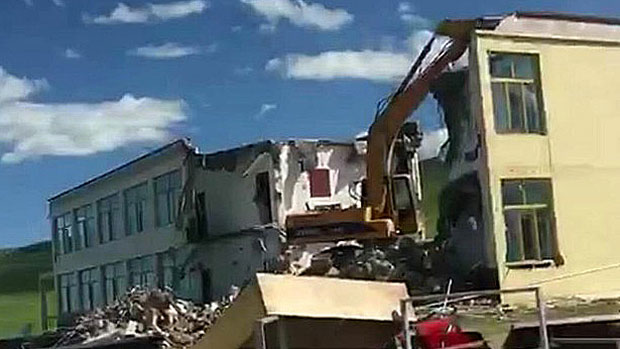 A Tibetan building is torn down near Qinghai Lake. Photo sent by an RFA listeners

Authorities in northwestern China’s Qinghai province are demolishing restaurants, shops, and guesthouses set up by Tibetans for tourists near scenic Qinghai Lake, resulting in severe financial hardship for those affected, according to a local source.

The destruction began in early July and follows similar campaigns undertaken in the Tsolho (in Chinese, Hainan) Tibetan Autonomous Prefecture over recent years in the name of protecting the environment around the lake, a Tibetan living in the area told RFA’s Tibetan Service.

“Many tourists flock to this site in Tsolho during the summer season, and local Tibetans try to take advantage of this by opening restaurants and hotels, but the Chinese have now begun to tear these buildings down,” RFA’s source said, speaking on condition of anonymity.

Demolition began on 12 July, and after a two-day pause on 24 July and 25, resumed on 27 July, the source said, adding that family dwellings in Galha and Jangxi villages have now also been targeted for destruction.

“Gradually, all other private homes built near villages along the lake will also be destroyed,” he said.

Construction of the targeted structures was self-financed with bank loans from and with loans from relatives and friends, RFA’s source said, adding that some local Tibetans also sold livestock to raise funds for the buildings.

“All of the money came out of our own pockets,” he said.

In some cases, Tibetan nomads unfamiliar with Chinese law believed that authorities would approve the construction as supporting national development, the source said.

“But now the authorities are demanding that permission be requested first, saying that buildings put up without proper authority will be deemed illegal and then torn down.”

Owners and relatives have been told they will be severely punished if they block the work of destruction, and can only try to move their belongings from their homes and businesses before the demolition begins, the source said.

“This has resulted in huge financial losses, and we local Tibetans are now in a desperate situation,” he said.

Shops and guesthouses around the lake were also ordered closed last year, while a June 2016 campaign to tear down unapproved structures resulted in the destruction of over 600 shops, restaurants, and homes, with not only Tibetan but also Muslim and Han Chinese property owners affected, sources told RFA in earlier reports.

Tibetans living in China frequently complain of political, economic, and religious discrimination as well as human rights abuses, and sporadic demonstrations challenging rule by Beijing have continued in Tibetan-populated areas since widespread protests swept the region in 2008.