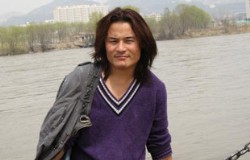 DHARAMSHALA:  Shokjang aka Druklo, a prominent Tibetan writer, was sentenced to three years in prison on Wednesday, 17 February. The sentence was pronounced by the Peoples’ Intermediate Court in Rebgong (in Chinese, Tongren) of Malho (Huangnan) prefecture in Qinghai province.

Shokjang was accused of writing material the Chinese government said could incite discord among nationalities and maintaining secret contact with so-called splittists who want to separate Tibet from China, and causing instability in the community, a Tibetan source from Tibet told RFA.

His sentencing comes almost a year after he was first arrested on March 19 last year, just a few days after the 56th anniversary of the 10 March Tibetan National Uprising Day of 1959.

A group of almost 40 Tibetans including his family and friends visited officials in Rebkong who read out the charges on which Shokjang was sentenced to. Any trial or court room proceedings leading up to the sentencing did not take place, according to information received by Gu Chu Sum, an organization of former Tibetan Political prisoners based in Dharamshala.

Shokjang has three published books to his credit. His book ‘The Courage of Path’ is banned by China.