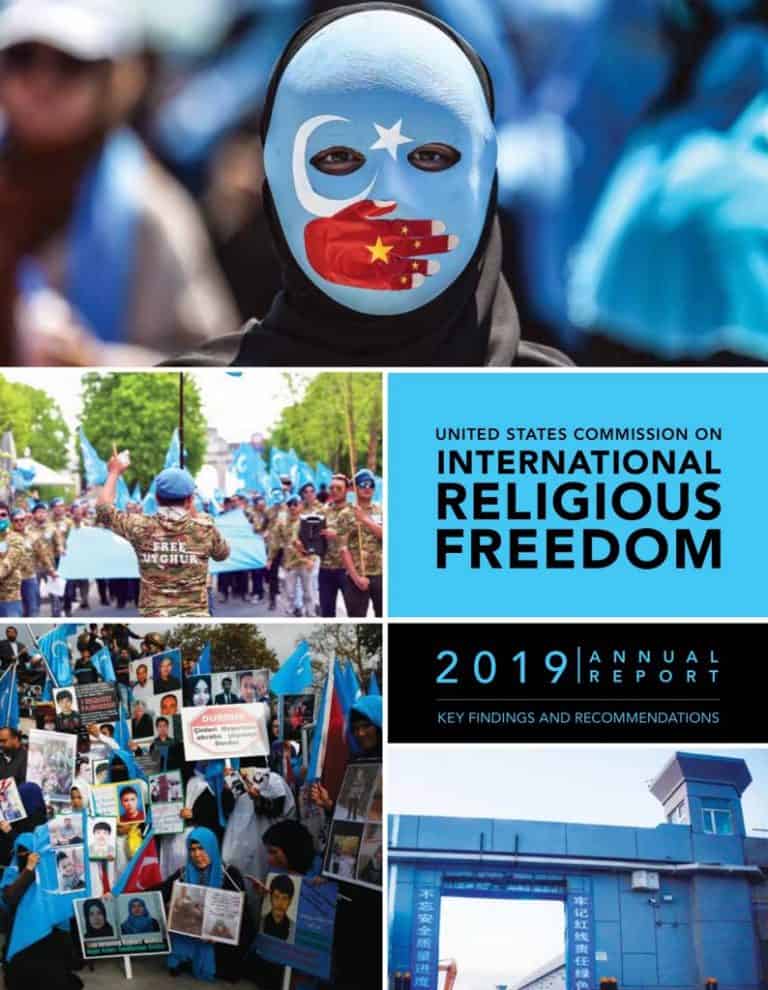 Dharamshala: The U.S. Commission on International Religious Freedom (USCIRF) called out China as one of the world’s worst persecutors of religious faiths in its 2019 annual report released Monday.

It was found that China was only one of several countries where freedom of religion or belief remained in peril throughout 2018.

“If there is one country in the world that epitomizes CPC designation it is China. Religious freedom only exists in name but not in reality in China. China has sinicized and securitized religions for a political agenda. The worst cases are in Tibet and the Xinjiang Uighur Autonomous Region,” said Dr Tenzin Dorjee, USCIRF Chair.

The report accurately documented the continued efforts by the Chinese regime to pursue a strategy of forced assimilation and suppression of Tibetan Buddhism throughout Tibet throughout 2018.

“Authorities controlled monastic education, decided if religious venues could be built or repaired, and restricted religious gatherings. In some parts of the Tibetan Autonomous Region (TAR), local authorities banned schoolchildren from attending religious festivals during their holidays. In February 2018, the TAR Public Security Bureau published a list of “organized crimes,” which effectively banned civil society initiatives to promote Tibetan language and culture. In August, the government introduced a policy requiring monks and nuns to demonstrate “political reliability,” “moral integrity,” willingness to “play an active role at critical moments”—a phrase human rights groups believe would require monks to oppose antigovernment protests. The government also selected a group of monks and nuns to attend a three-day training session during the summer to prepare them to conduct propaganda campaigns in their monasteries,” it said.

In other parts of Tibet, “the Chinese government maintained tight control on Tibetans and religious and educational centers focused on the study of Tibetan Buddhism. Authorities forcibly evicted thousands of monks, nuns, and laypersons living in the monastic communities of Larung Gar and Yachen Gar in Sichuan Province and forced many of them to attend “patriotic reeducation classes” for up to six months.”

The Commission revealed that China’s efforts to “sinicize” religious belief were not just an attempt to diminish and erase the independent practice of religion, but also the cultural and linguistic heritage of religious and ethnic communities, particularly Tibetan Buddhists and Uighur Muslims.

“I don’t think it’s an exaggeration to suggest that the Chinese government has essentially declared war on religious faith,” USCIRF Commissioner Gary L. Bauer was quoted in an interview.

The USCIRF recommended that the U.S. government—and the international community—must swiftly and resolutely sanction Chinese officials and agencies that have perpetrated or tolerated severe religious freedom violations, including Chen Quanguo, Communist Party Secretary in the Xinjiang Uighur Autonomous Region and Politburo Member, among others.

That the State Department redesignate China as a CPC under IRFA and maintain the existing, ongoing export restrictions under the Foreign Relations Authorization Act of 1990 and 1991 (P.L. 101-246).

The U.S. and other governments to press the Chinese government to immediately and unconditionally set Uighur and other Muslims free and also release prisoners of conscience like Uighur Muslims Gulmira Imin and Ilham Tohti, Tibetan Buddhists like the Panchen Lama and Tashi Wangchuk, Christians like Pastor Wang Yi and Hu Shigen, and human rights defenders like Gao Zhisheng. Also they must urge the Chinese government to cease detaining, arresting, and imprisoning believers and human rights defenders for their peaceful activities and stop interfering in the practice, instruction, and observance of their beliefs. Unfortunately, China is

In addition, world governments must urge the Chinese government to cease detaining, arresting, and imprisoning believers and human rights defenders for their peaceful activities and stop interfering in the practice, instruction, and observance of their beliefs.

Recommendations to the US Government and Congress:

• Integrate religious freedom and related human rights diplomacy into ongoing trade negotiations, the U.S.-China Diplomatic and Security Dialogue, and all other levels of the U.S.-China bilateral relationship, and devise messaging tailored to specific religious communities in China;

• Prioritize funding for programs that seek to preserve the cultural and linguistic heritage and identity of religious and faith communities in China and to document the experiences of refugees and asylum-seekers from China who have suffered particularly severe violations of religious freedom;

• Coordinate with U.S. allies and partners, especially in Asia, on targeted sanctions, visa restrictions, public diplomacy, and other actions taken in response to China’s crackdown on religious freedom;

• Direct the State Department to work with foreign governments and the United Nations (UN) High Commissioner for Refugees to prevent the refoulement of individuals from China seeking asylum on the basis of religious persecution; and

• Work with U.S. businesses, nongovernmental organizations, and academic institutions to counter Chinese government influence in the United States that are designed to suppress information about or advocacy in response to violations of religious freedom in China.

The U.S. Congress should: • Support legislation that would increase restrictions on the export to China from the United States of advanced technology—including surveillance and biometric equipment—that has enhanced the Chinese government’s capacity to monitor and harass religious and ethnic communities; and raise the profile of religious freedom in the U.S.-China relationship.

Created by the International Religious Freedom Act of 1998 (IRFA), the U.S. Commission on International Religious Freedom (USCIRF) is an independent, bipartisan U.S. government advisory body, separate from the U.S. Department of State, that monitors religious freedom abroad and makes policy recommendations to the president, secretary of state, and Congress.  USCIRF bases the recommendations on its statutory mandate and the standards in the Universal Declaration of Human Rights and other international documents.