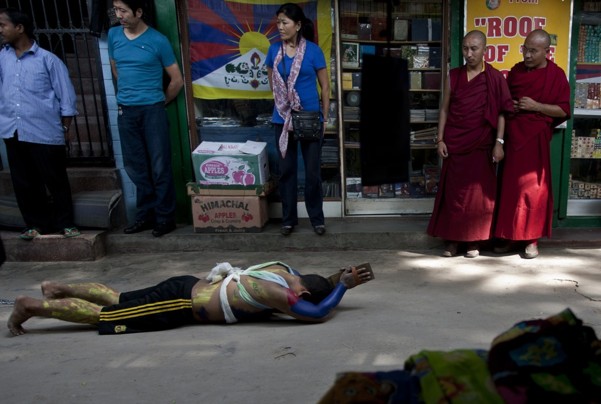 Tsering Topgyal/AP – An exile Tibetan prostrates and drags a coffin to show solidarity to those who self immolated in Tibet during a protest in New Delhi, India, on Oct. 17, 2012. Activists have reported 55 self-immolations since February 2009.

NEW DELHI — As China’s Communist Party prepares for its leadership transition, a wave of self-immolations has spread and accelerated across Tibet, in the most sustained protests against Beijing’s rule there in five decades.

Most of those who have set themselves afire are in their late teens or early 20s, activists said. Exiled Tibetan political leaders and scholars described the actions as an emphatic rejection of the economic development and material gains that China is offering the Tibetan people and an anguished call for independence and the return of the region’s religious leader, the Dalai Lama.

“Almost all of them were born after the Chinese occupation of Tibet and the Cultural Revolution,” Lobsang Sangay, the political leader of the refugee community’s India-based government-in-exile, said of the protesters. “They have grown up in the Chinese system, received Chinese education. They are the primary beneficiaries of whatever the Chinese government gave them. They are saying, ‘This is not what we want.’ ”

It is not certain whether the latest acceleration of the protests is timed to send a signal to the Chinese Communist Party Congress, which will meet beginning Nov. 8 to install a new leadership in Beijing.

Nevertheless, the protests appear to have embarrassed the Chinese leadership, which has responded by intensifying its crackdown, activists and scholars say.

China says it rescued the Tibetan people from medieval serfdom under the Dalai Lama’s theocratic rule when it took over in 1950, and in recent years it has poured money into the region for roads, a high-speed railway and projects such as rural electrification.

It blames the self-immolations on what it says are the previous leadership’s attempts to split the country. “This is shameful and should be condemned,” Foreign Ministry spokesman Hong Lei told a news conference last week.

But many Tibetans appear to view the protesters as heroes, sometimes trying to prevent the removal of their bodies by Chinese police, laying ceremonial scarves at protest sites or paying tribute to their families.

“Tibetans are responding to China’s repressive policies, to seeing their neighbors, friends and families attacked, harassed, beaten and jailed,” said Lhadon Tethong, director of the Tibet Action Institute. “The self-immolations are a response to escalating repression, which the Chinese meet with more repression, and we are in this vicious cycle.”

In the run-up to the 2008 Beijing Olympics, Tibet was engulfed in protests and riots that saw hundreds killed and thousands arrested. Since then, China has tightened its grip on the high plateau, in what many Tibetans have described as an attack on their language, religion and culture.

The self-immolations spread from an important monastery in the town of Aba, on the eastern edge of the Tibetan plateau, taking off as a form of protest in March of last year. Most of the initial protesters were monks or former monks, but most of the latest are laypeople, including farmers, students and a writer.

The protests have spread across eastern Tibet and even to Lhasa, the region’s main city, prompting a renewed crackdown there, activists say. Foreign tourists are already banned from visiting Tibet, but now Tibetans from outside the city are unable to travel there without a residence document, in an attempt to stop further incidents, activists say.

In other areas where self-immolations have taken place, Internet access and telephone service have been cut off, sometimes for months, activists say.

Police in one region recently issued fliers offering rewards of nearly $8,000 for tips about planned self-immolations and up to $30,000 for information about the “black hands” who supposedly organized four such acts in the area.

“Local authorities are under pressure from the central government to put an end to this,” said Elliot Sperling, a Tibet expert at Indiana University. “But this is a form of protest that doesn’t need a conspiracy, it just needs a person. These fliers seem to me to be somewhat desperate.”

The protests have spread because the “tactic is resonating,” said Sperling, although some activists said the recent spurt could be linked to the imminent party congress.

One of the men who set himself ablaze last week had called a friend the day before and asked when the congress was taking place, said Kate Saunders of the International Campaign for Tibet, adding that the man had complained that the Chinese government was doing nothing to improve conditions in Tibet.

“This is the first direct evidence we’ve had that Tibetans are factoring this into the decision to self-immolate so close to party congress time,” she said.

While Sangay renewed his appeal for Tibetans not to take such “drastic action,” the Dalai Lama has taken a more neutral line on what he said was a “very, very delicate political issue.”

“Now, the reality is that if I say something positive, then the Chinese immediately blame me,” he told India’s Hindu newspaper in July. “If I say something negative, then the family members of those people feel very sad. They sacrificed their own life. It is not easy. So I do not want to create some kind of impression that this is wrong.”

In September, U.S. Ambassador to China Gary Locke paid a rare visit to Aba, the restive area where many of the self-immolations have taken place, and visited monasteries. He called the incidents “very deplorable.”