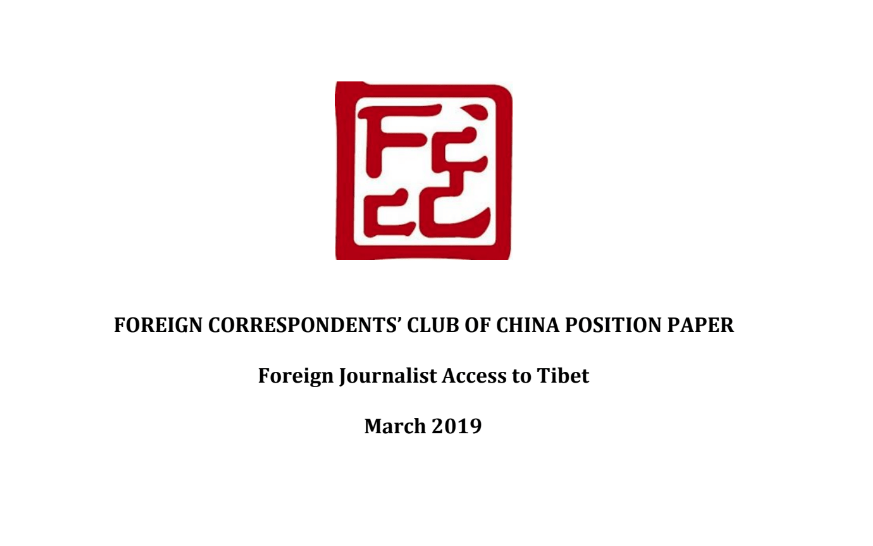 Dharamshala: Last week the People’s Republic of China’s State Council Information Office issued a White Paper document rife with delusory claims of “liberating Tibetan people” and  “ensuring their rights in all matters” as “the masters of the nation and society”. While inside China, the PRC’s propaganda-fuelled disinformation works seamlessly—and it helps to have its entire national media agencies centralised to dictate the government’s rhetoric—in the free and open world, such brainwashing campaigns are struggling to gain any regard much less shape public opinion.

Days after the White Paper release, an association of 204 foreign journalists in Beijing published a Tibet Position Report calling out the Chinese government to end its heavy-handed restrictions imposed on Tibetan Autonomous Regions and Tibetan inhabited areas while citing serious government interference in accurate reporting on the situation in Tibet.

“While a security crackdown in Xinjiang generates headlines, very little is known about the situation further south in Tibet, which is effectively closed to journalists,” the Foreign Correspondents Club of China said as it released the 10-page report on Tibet.

The report found Chinese authorities responsible for limiting reporting access in TAR and Tibetan regions through stringent government restrictions and other forms of pressure including intimidation and harassment of sources and constant surveillance of journalists in the TAR and other Tibetan-inhabited areas.

“Unlike other provinces and regions in the country, journalists who seek to report in the Tibet Autonomous Region (TAR) are required to first obtain permission from the government. This permission is rarely granted to journalists seeking to make independent reporting trips.”

In 2018, five respondents to the FCCC annual working conditions survey applied to go on reporting trips to the Tibet Autonomous Region. Not a single trip was approved.

Today foreign correspondents are only allowed to travel to Tibet proper on pre-approved trips supervised by the Foreign Ministry or State Council.

A correspondent who visited on a Government-arranged media trip said: “By any standard, ‘reporting conditions’ were utterly nonexistent during this trip. I’ve felt freer in North Korea.”

Moreover, reporting in other Tibetan-inhabited areas – more than half of the six million Tibetans in China live outside of the TAR in the neighboring provinces of Qinghai, Gansu, Sichuan, and Yunnan – is often obstructed, despite China’s stated regulations stipulating that international journalists have the freedom to travel to all areas outside the TAR and speak to sources.

The FCCC expressed alarm over China’s heavy-handed punishment of a Tibetan source and a language advocate Tashi Wangchuk, saying that the case clearly signalled “China’s willingness to abridge its citizens’ right to free speech and silence sources by sending them to jail, setting another impediment to newsgathering”.

In late 2018, China sentenced Tibetan language activist Tashi Wangchuk to five years in prison largely based on comments in a New York Times video documentary about his efforts to promote Tibetan language education.

In view of China’s growing leadership in many global organizations, including as host of the 2022 Winter Olympics, the foreign correspondents’ group argued that the Government should ensure greater transparency and accountability to the international community.

Issuing an immediate call to grant unfettered access to the Tibet Autonomous Region and all Tibetan-inhabited regions, the FCCC urged the Chinese government to eliminate restrictions of foreign correspondents traveling to Tibet by 2021, approve all reporting-trip applications in the meantime, and cease intimidation of Tibetan sources or would-be sources.

In a 7-point recommendation, the FCCC demanded intervention of foreign governments in protesting China’s intimidation of international media that conduct interviews with His Holiness the Dalai Lama.

It also urged foreign governments to “persistently press for the early release of Tashi Wangchuk, and press for the law to protect all journalistic sources, in keeping with international best practices”.