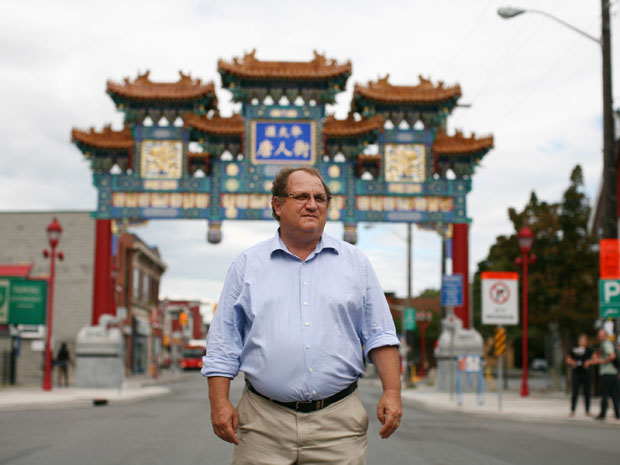 Ottawa freelancer Mark Bourrie says he cut ties with Xinhua when he discovered an assignment would be filed to the government, not the news service. Photograph by: David Chan for National Post

OTTAWA – A Canadian journalist says he quit working for China’s news agency because it wanted him to spy on the Dalai Lama in Ottawa.

Ottawa-based freelance journalist and author Mark Bourrie makes the allegation against the Xinhua news service in an article published in Ottawa Magazine, and in an interview with The Canadian Press.

The matter will likely revive debate around the long-standing issue of whether Xinhua is an intelligence-gathering front for the Chinese government instead of a legitimate news service.

Bourrie, 55, said he resigned in April after working for two years for Xinhua in Ottawa because its Ottawa bureau chief, Dacheng Zhang, wanted him to use his parliamentary press pass to gain access to the Dalai Lama’s final news conference, and turn over all notes and materials without writing a story.

Bourrie says the agency collected hours of video and other notes of the Dalai Lama’s most recent trip to Ottawa on April 27 and 28, but it wasn’t interested in publishing a story on the Tibetan spiritual leader. The Chinese government considers the Dalai Lama to be its enemy.

Zhang, who is currently travelling with other Canadian journalists on Prime Minister Stephen Harper’s annual tour of the Arctic, denied Bourrie’s claim on Wednesday.

Zhang told The Canadian Press that Xinhua’s policy is to “cover public events by public means” and his bureau’s job is to cover news events and file the stories to Xinhua’s editing rooms. It is up to them to decide how and what to publish, Zhang said, calling those decisions internal matters.

Bourrie said that Xinhua’s journalistic access to Parliament Hill and other Ottawa events should be reviewed by the parliamentary press gallery because the credentials it has issued are being used to gather information for a foreign government, not solely for media reports.

“The core issue is how much access we’re willing to give to people who are both journalists and agents of the Chinese government in Ottawa,” he said in an interview.

“When the crunch came with the Dalai Lama, it was obvious they weren’t working as reporters anymore; that they were working as agents of the Chinese government.”

Chris Rands, the press gallery’s president, said its executive is “aware of a disagreement” between Bourrie and Xinhua.

“The executive has asked both sides to come and explain their views. Bourrie told us he would not meet with the executive until he could publish his article,” Rands said Wednesday.

“It is now my understanding his article will be published this week. The executive looks forward to hearing from both sides shortly.”

Bourrie, a veteran freelance journalist who has published several books, said the news agency approached him in Ottawa in late 2009 because it wanted to expand its coverage of Canada and compete with other news services.

The Chinese Communist Party created Xinhua in the 1930s to handle revolutionary propaganda. It is run by the government in Beijing, and has grown into an international multimedia empire.

Xinhua is also widely suspected by western intelligence agencies of having links to China’s spy services.

This issue surfaced last summer when Conservative MP Bob Dechert, the junior foreign affairs minister, acknowledged sending flirtatious emails to a female correspondent of Xinhua. The government concluded that he did not harm any Canadian interests through his conduct.

Bourrie said he was aware of Xinhua’s reputation for spying, but was ignored when he asked Canada’s spy agency, CSIS, for advice.

Over the course of his two years writing for Xinhua, Bourrie said its promised expansion never materialized.

Zhang said Xinhua is a respected world news agency and he considers it an honour to cover news in Canada to “promote mutual understanding and friendship between China and Canada, which enjoy a fast developing strategic partnership.”

Bourrie said he mostly covered routine political subjects, but said he received and rebuffed some unusual requests from his bureau chief.

Among them, he said: find the names and addresses of the people who protested the 2010 visit of Chinese Premier Hu Jintao to Ottawa.

But Zhang said Bourrie had been freelancing for Xinhua for about two years and was never told to find anyone’s address.

“Nobody told him to pretend to be a journalist and act for a foreign power,” Zhang said. “That is his Cold War ideology.”

Zhang eventually told him that he wanted to investigate the status of the Falun Gong movement in Canada, said Bourrie.

The Chinese government banned the Falun Gong spiritual movement and has subjected its followers to a brutal crackdown after it gained some prominence in China in the 1990s.

Overall, Bourrie writes, “I knew I had never written anything for Xinhua that I would not have filed to a Canadian newspaper.”

Then the Dalai Lama arrived in Ottawa for a two-day event on April 27. The Chinese government considers the Dalai Lama to be an enemy of the state, and portrays him as a dangerous separatist.

Bourrie covered the Dalai Lama’s speech to the Sixth World Parliamentarians’ Convention on Tibet at the Ottawa Conference Centre — an event that was open only to accredited journalists. Members of the parliamentary press gallery were admitted because of the press badge that it issues.

Bourrie said he was told the information he gathered at the session would be used in a news story, but he said he never found evidence of one.

When Bourrie asked if this would lead to a story, he said he was told by Zhang that Xinhua does not report on Tibetan separatists.

“We were there under false pretences, pretending to be journalists but acting as government agents,” Bourrie concluded in his article.

“That day I felt that we were spies. It was time to draw the line. I put down my pen and notepad, listened to the Dalai Lama, shook his hand when he left, went home, and sent Xinhua an email telling them I quit.”

Zhang said that the day of the Dalai Lama press conference, all he asked Bourrie to do was to take notes of the speaker’s main ideas, not detailed coverage, as he was busy shooting video.

Bourrie said in the interview that he expects to attend a meeting of the press gallery executive soon that will examine the possibility of rescinding Xinhua’s press gallery privileges.

“I think there’s been a betrayal of the trust that the House of Commons puts in the parliamentary press gallery to protect Parliament Hill from foreign agents.”

It is expected that Zhang will also be summoned to explain his version of events.