China Is Under Lockdown 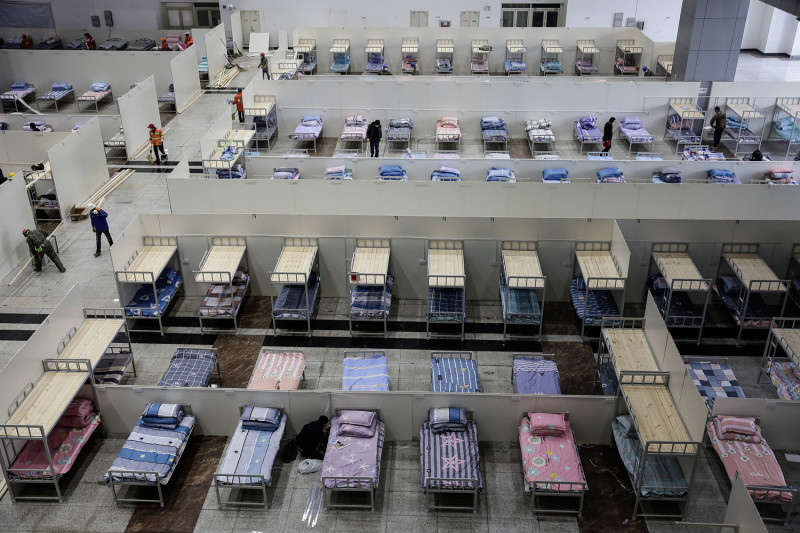 Workers prepare the Wuhan International Conference and Exhibition Center to serve as a temporary hospital for novel coronavirus patients in Wuhan, China, on Feb. 4. Stringer/Anadolu Agency via Getty Images

The toll of the new coronavirus that originated in Wuhan keeps rising, with Chinese officials reporting nearly 500 fatalities and 24,447 confirmed cases as of Wednesday. So far, the mass quarantine of Hubei province does not appear to have halted the spread of the virus, with several other Chinese cities confirming hundreds of cases—numbers likely to rise in the next two weeks.

Cities are increasingly going under lockdown. Even in urban centers that are nominally back to work after the Lunar New Year holiday, like Beijing, streets and transport hubs are empty. (See this video of the deserted Beijing railway station, which usually sees around 34.7 million passengers during the holiday period.) In some cities, such as the business hub of Wenzhou, businesses and schools are closed, with citizens asked to stay confined to their homes.

Xi in charge. Meanwhile, official announcements (link in Chinese) that President Xi Jinping is “personally leading and directing” the fight against the virus are reasserting the leader’s authority. People’s Daily front pages remind citizens that they must “rally around the party with Xi Jinping as the core.” The propaganda isn’t a surprise, but what is peculiar is that the president didn’t appear in public for over a week until meeting with Cambodian leader Hun Sen on Wednesday.

As with Xi’s mysterious disappearance in 2012, before he ascended to power, rumors are swirling, but the most likely explanation is that Xi is a 66-year-old man with a stressful lifestyle. There is certainly fear within the party system about him getting the virus: That would expose the lack of a clear successor to Xi.

Locked away. The new government policy appears to be to cluster those who have the virus in quarantine zones rather than let them be treated at home. Several buildings in Wuhan, including hotels, have been seized for this purpose. Across China, people who have recently been to Wuhan or to Hubei province are being tracked and quarantined. Meanwhile, the number of deaths from the virus is almost certainly understated. The news outlet Caixin interviewed (link in Chinese) a Wuhan doctor who confirmed reports of infections among health care workers, patients being asked to pay upfront despite promises of free care, and underreported deaths in hospitals.

Reporting crackdown. Stories like Caixin’s could soon be thin on the ground. As predicted, the brief period of relative media freedom seems to be over. Chinese media leaders have been given a new official line: “Sources of articles must be strictly regulated, independent reporting is strictly prohibited, and the use of nonregulated article sources, particularly self-media [content produced by citizen journalists], is strictly prohibited.” The cost of dissent will now be higher, especially with Xi’s reputation on the line.

Sending signals. There was a strange turn in propaganda over the weekend from official Chinese media, as stories blamed the United States for causing panic over the new coronavirus—including false claims that the United States was the first country to restrict visitors from China. (Other countries, including Chinese ally Russia, announced measures earlier.) The anti-American coverage could continue if the Chinese Communist Party feels really threatened—perhaps repeating Russian conspiracies that the virus is a U.S. bioweapon.

Meanwhile, Beijing is trying to enforce loyalty by insisting that countries not evacuate citizens or cancel flights to and from China. Pakistan’s bizarre decision to resume flights after suspending them has already been questioned. Long-serving Cambodian Prime Minister Hun Sen has used the crisis to signal his allegiance to Beijing, including claiming that he will visit Wuhan himself.

What is happening in Xinjiang? An outbreak of the virus in the detention camps in Xinjiang, which hold 1.5 million Uighur Muslims, would be a nightmare scenario. Many of those detained are elderly, and almost all of them are suffering physically. A recent claim by an official in Xinjiang that the spread of the virus there was a “state secret” hasn’t reassured Uighurs who fear another horror. The official number of cases in the region remains very low, and distance and heat may give residents there a greater shield against the virus.

Local officials face punishment. The Chinese Communist Party has begun punishing local officials in Hubei province, removing several from their posts over their handling of the virus outbreak. More severe penalties, such as expulsion from the party or criminal charges, may come after the crisis is contained. Beijing seems determined to have Wuhan, rather than higher-level authorities, take the fall for the early cover-up.

Cathay Pacific, Hong Kong’s flagship carrier, on Wednesday asked its staff to take unpaid leave for three weeks as it faces bleak business prospects due to the new coronavirus outbreak. The airline is the most prominent victim of canceled trips and suspended flights to China since last month, as well as additional travel restrictions. (Cathay Pacific and other Hong Kong airlines have cut their flight capacity to the mainland.) The airline policies extend well beyond Asia: Dozens of international airlines have suspended or reduced scheduled flights to China in the coming weeks, as shown below.

Logistics fraying under strain? Despite the lockdowns, shortages of food and supplies haven’t emerged yet, outside of Hubei’s desperate hospitals. That’s a tribute to the logistical links developed in China over the last 20 years. (Caveat: Many of China’s most vulnerable people aren’t online, and they are less visible to both us and the authorities.) But breaks in the supply chain are already severely affecting foreign businesses, such as auto manufacturing in South Korea. The Hong Kong Open Source Intelligence group, a collective online project, is tracking possible goods shortages, while governments are moving to aid businesses in need.

Shaky stocks. The Chinese stock market plunged on Monday after reopening following the Lunar New Year holiday. It saw a slight recovery, buoyed by government promises. Trading is tightly controlled in China, with the government often directly warning traders not to sell in vulnerable sectors. The coronavirus risk remains acute for sectors across Asia, especially if transport links are frayed by further outbreaks. The markets don’t seem to have priced in how critical the epidemic could become.