China is Destroying Tibet’s Culture & Religion: It Will Backfire

Tenzin Tsultrim for The Quint. Read the original article here. 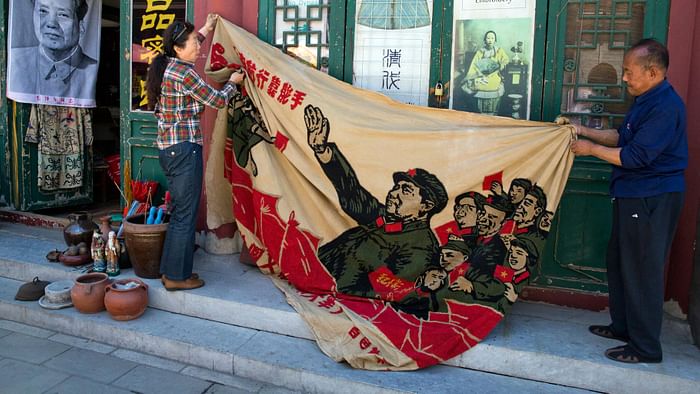 Vendors unfurl a banner from 1969 depicting former Chinese leader Mao Zedong as he “inspects the great army of the Cultural Revolution”. (Photo: AP)

China’s increasingly repressive policies will only breed more subtle resistance in Tibet and among Tibetans abroad.

Around 70 years ago, before Tibet was invaded by China, the People’s Liberation Army (PLA) soldiers were given strict instructions by the Chinese Communist Party (CCP) Chairman Mao to not harm the religious sentiments of the Tibetan people. The plan was to temporarily win the hearts and minds of the Tibetan people.

Not only this, later in the 17 Point Agreement of 1951, the CCP promised, through the 7th and 13th points, that: “The religious beliefs, customs, and habits of the Tibetan people shall be respected, and lama monasteries shall be protected..” and “The People’s Liberation Army entering Tibet shall abide by all the above-mentioned policies and shall also be fair in buying and selling and shall not arbitrarily take a single needle or thread from the people.”

However, the irony is that CCP has taken everything from the Tibetan people, even their freedom to learn the Tibetan language and practice their religion. Such kind of deceptive courtesies was practiced to fool the Tibetan people. In today’s language of international relations, this could be called “deceptive diplomacy”.

Things started to change soon after PLA soldiers had completely entrenched their total control over Tibet. Taking a leaf out of Stalin and Khrushchev’s playbooks, Mao understood the importance of destroying an identity lies in destroying its language. However, in Tibet, he realized the importance of Tibetan Buddhism as an important aspect of Tibetan people’s life, hence, Tibetan Buddhism also became another major target for destruction.

With the coming of Xi Jinping, the repression became more intensive and along with the traditional surveillance, hi-tech surveillance is employed to an extreme level.

No One is Allowed to Grow Under Xi’s Watchful Eyes

In Tibet, further limiting the already diminishing rights of the Tibetan people indicates the intensification of repressive policies under Xi. It seems rather obvious that Xi is very insecure about his own seat of power. From the time of his ascent to power in November 2012, he has initiated a sea of change within China, Tibet, East Turkistan (Xinjiang), and Inner Mongolia in curbing the little space available for religious freedom.

It appears that Xi has unleashed an intensive crackdown on religions all over China. Hence, it is not by mere coincidence that the security-related expenditure in Tibet increased dramatically after the 2008 Peaceful Uprisings. Without even redressing the grievances of the Tibetan people, only a few months after Xi Jinping ascended to power, from 2013, the security expenditure in Tibet skyrocketed. 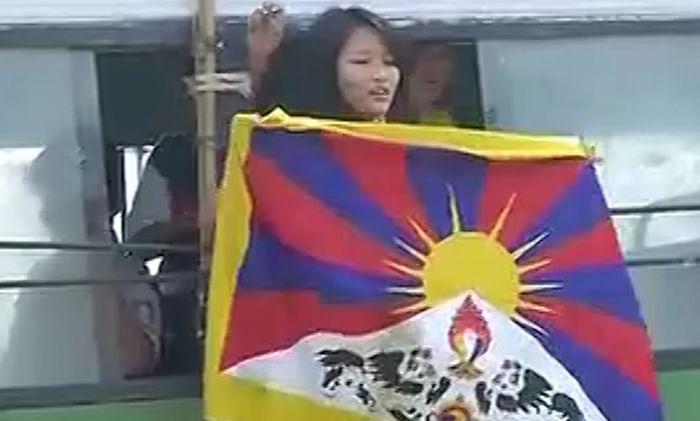 Tibetan student outside the Chinese Embassy in India (Photo: IANS)

After the 2008 peaceful uprisings, the repressive measures employed by the CCP were intensified on Tibetan Buddhism particularly over the Tibetan monastic institutions. Because the 2008 uprisings in Tibet were the culmination of demonstrations by the monks of Drepung monastery in March 2008 for the release of their fellow-monks from prison, monasteries were seen as seats of dissent and spirit of Tibetan nationalism.

After the 2008 uprisings, patriotic reeducation campaigns were enforced. Beginning from 2011, over 21,000 cadres were reportedly sent to villages across Tibet. In addition to political monitoring and other tasks, they reportedly carried out “patriotic reeducation sessions at religious sites and among lay believers, where the monks and nuns are forced to condemn the portrait of the Dalai Lama. Beginning in 2017, a series of notices were issued by four school authorities in Lhasa, ordering parents not to allow their children to take part in religious activities or to visit religious places such as monasteries.

In one of her poems based on her visit to Lhasa on August 23, 2008, “The Fear in Lhasa”, activist Tsering Woeser vividly depicts the dark clouds of fear hovering over the capital of Tibet.

The presence of pervasive soldiers, security cameras, and invisible plainclothesmen in every corner of Lhasa has made Tibetan people vigilant in nature. According to Woeser, among Tibetans, Zab Zab chi (in Tibetan, it means ‘be careful’) has become a byword.

Why Tibetan Buddhism is Still Repressed by the CCP?

There is a shared consensus in the writings of scholars and professors like Tsering Shakya(2012), Tsering Topgyal(2011,2012), Robert Barnett(2012), Dibyesh Anand(2018) with erudite researchers from rights groups such as Tsering Tsomo, the Tibetan Centre for Human Rights and Democracy (TCHRD) Sarah Cook(Freedom House), Sophie Richardson(Human Rights Watch{HRW}), and about the causes and its implications for the CCP’s application of continuous repressive policies in Tibet.

In most of their works or reports, they have emphasised the sense of perceived insecurity experienced by the CCP on the growing fascination of Tibetan Buddhism among the Chinese and total devotion by the Tibetan monks and people towards Tibetan Buddhism and the Dalai Lama.

These factors really make them highly insecure about their legitimacy and control over the Chinese and Tibetan people.

In The Perils of Insecurity, Tsering Topgyal has dissected the logic behind the CCP’s consistent pursuits of undermining Tibetan Buddhism further making the Tibetan people insecure and protective of their cultural and religious identity. This cycle of repression and resistance is the direct result of the CCP’s continuing failed policies. The destruction of Larung Gar and Yarchen Gar, the two religious academies in Eastern Tibet testifies CCP’s insecurities about their growing strengths and size. Because these academies have attracted thousands and thousands of Tibetan and Chinese followers from China and Southeast Asia countries, they have been seen as a major threat to the authority or legitimacy of the CCP’s rule.

Similar to restrictions imposed during the Cultural Revolution, it appears that CCP is deliberately provoking the Tibetan people by systematically attacking traditional values which were earlier completely out of the CCP’s radar.

This writer estimates that soon a series of new extreme form of restrictions might be enforced stealthily such as forbidding the Tibetan people to wear their traditional dress and also discouraging them to eat their staple food, “Tsampa” a roasted barley or wheat flour and many others which might according to the CCP’s rulebook symbolizes Tibetaness in nature.

The current extensive surveillance systems will further cement the feeling of victimhood. The peaceful uprisings of 1959, 1989 and 2008 were all direct results of repressive policies implemented by the CCP. The increasing repressive policies will only breed more subtle resistance, more insecurities among the Tibetans about their identities, and may lead to another mass uprising given the current international politics surrounding China’s image both at home and abroad.

(Tenzin Tsultrim, PhD, is a former research fellow at the Tibet Policy Institute, a think tank of the Central Tibetan Administration in Dharamshala, India. This is an opinion piece and the views expressed are the author’s own. The Quint neither endorses nor is responsible for them.)