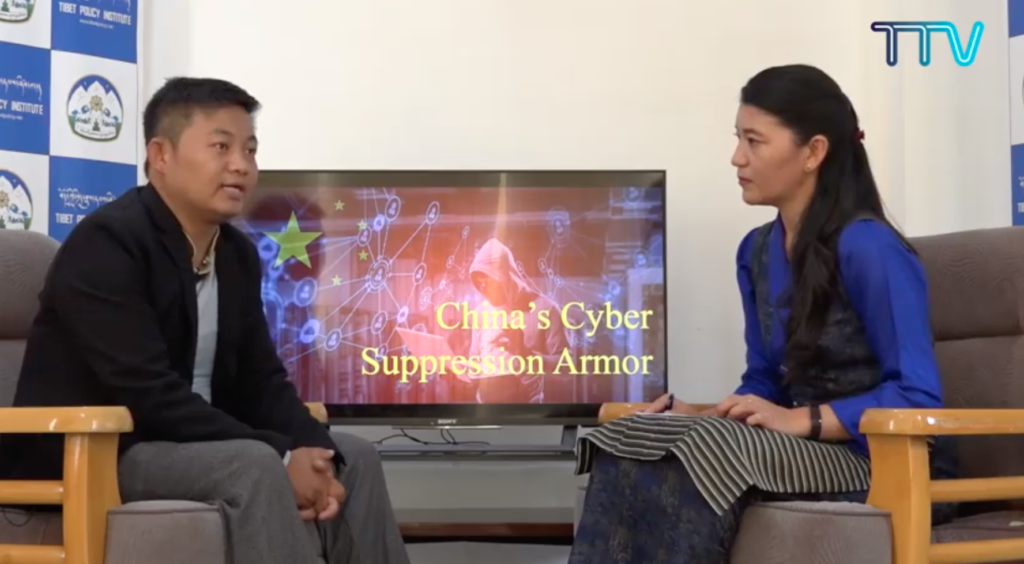 Dharamshala: The Communist Party of China has long kept tight control on both its traditional and new media to avoid possible subversion of its authority. Censoring and controlling information and spreading deceptive narratives still remain as its tactics to exert that control even in the time of the COVID-19 pandemic.

Below is the excerpt of the interview:

Tenzin Dalha: To begin with, Chinese cybersecurity as well as the recent pandemic caused by COVID-19 and in terms of it, China has the most rigid and dynamic censorship. Recently the propaganda network of China was worse and extensively covered. With this regard, they try to make their own narrative and a cover blanket over the cause and details of the information which was censored. This has created a lot of tension and outspoken netizens have come out on Chinese social media platforms and they predominantly discuss how the virus was separated in the Wuhan market. China always tried to cover their own deceptive narratives and most probably cover the issues. This may be of concern to the worldwide initial outbreak covering as predominantly makes separation of freedom of speech and expression.

Tibet news Bureau: Talking about the freedom of speech that the Chinese government is violating. The Communist Party of China has long been violating its citizens’ right to information, freedom of speech, and freedom of the press by cracking down on news stories by claiming they endanger the country by exposing the so-called state’s secrets. How and in what way did the COVID-19 exposed the gap in China’s cyber suppression armour?

Tenzin Dalha: During the COVID-19 pandemic, there is a very big gap in the Chinese cyber armour because many of the netizens are already suppressed and they want to vent their grievances against the CCP regime. On the other side, China is employing huge number of cyber propagandists to paint themselves in a positive light. These propagandists are popularly known as 50 Cent Army. Many of them are working in a department as well as the news outlet. They come out with fake accounts on social media. The Chinese foreign diplomats created a new Twitter account and since April, more than 20,000 new Twitter accounts were created and around 200 diplomats and media outlets have portrayed China in a positive light amid the pandemic.

Tibet News Bureau: You have pointed out an astounding fact that was recently all over the news that Twitter has shut down about 1,70,000 accounts that tweeted about the Chinese government’s narratives and Twitter also said those tweets were mostly and predominantly made in Chinese languages. Could you elaborate more on how the Chinese government is employing thee huge surveillance technology and propaganda tactics apart from employing state control media such as Xinhua and Global Times?

Tenzin Dalha: I agree that Twitter was banned in China since 2009 but more recently, the Twitter official has announced that many fake twitter accounts were created by Chinese and they are using in Mandarin and English to make more false propaganda on social media platforms. From that, the Chinese diplomats including Chinese foreign Ministry spokesperson Zhao Lijians himself created a narrative and came out with many conspiracy theories about her origin of the virus such as he claimed that the virus originated when the US military came in Wuhan. He also accused the European and other nations of bringing the virus to China in the pursuit to cover the reality by adding new narratives every day.

Tibet News Bureau: You have argues that despite the government’s tight control over the internet and information, the COVID-19 outbreak saw an expression of online criticisms from Chinese netizens and human rights advocates at a level that was never seen before. What does that imply?

Tenzin Dalha: Most of the global social media networks were banned in China but they have their own homegrown social media platforms like Weibo and WeChat. So with the recent COVID-19 pandemic cases starting from March, a lot of messages were flooded on Chinese social media platforms showing their outrage and outcry asking the government for transparency and accountability of the origin of the virus because at the initial period CCP and health workers claimed that the virus is preventible and that there won’t be further damage caused by the virus but in reality, it has become a worldwide concern now. This has encouraged debate among the Chinese netizens and they came forward and narrate their own stories on Instagram and Facebook. Many youngsters came forward and shared their first-hand information from Wuhan and that garnered world attention and received global coverage. As a result, the Chinese government became quite agitated and ashamed of concealing the details. For example, Dr. Li who first initially warned about a suspected virus was interrogated and later he died from the same virus. Such an incident has invoked outrage among the public.

Tibet News Bureau: According to your research, how would you rate the Communist Party of China’s level of success in employing these strategies such as mask diplomacy, developing various theories about the origin of the novel coronavirus, and influencing the WHO?

Tenzin Dalha: As far as my observation, these are failed attempts by the Chinese government starting from the masked diplomacy, increasing the pay rate of 50 Cent Army to 70 Cent. They tried to make lots of propaganda and even they tried to compare with the US and the European countries and through mask diplomacy, they tried to aid PPE kits while accusing the U.S of not helping. In reality, China wants to claim and become a hero. Many of the aids were of poor and substandard quality. This has raised the question among the European countries and other nations about Chinese transparency and legitimacy behind working on the issue. They are smart enough to divert global attention by engaging themselves in different issues around the world such as border incursions and tension with India and the South China Sea. In China. the Chinese netizens and nationals are managing to slip through the cracks by portraying serious topics in a light-hearted manner such as using memes and images. The more you suppress the people, the greater will be their resistance.