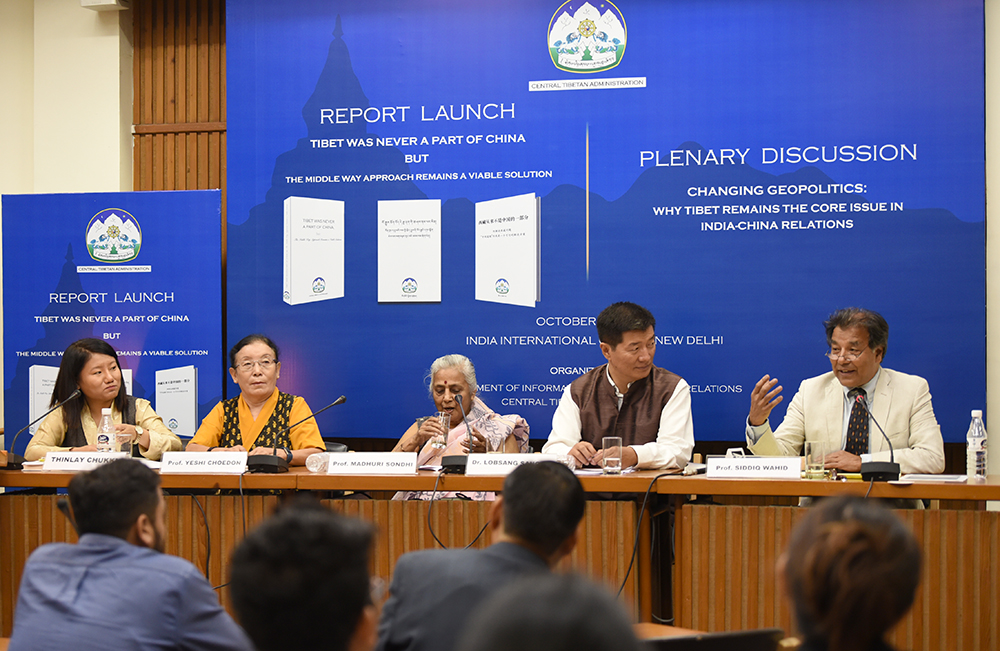 Dr.Siddiq Wahid speaking on the topic of “Viewing Tibet, India and China relations through the Himalayan lens” at the plenary discussion. Photo/Tenzin Phende/DIIR

New Delhi: The Department of Information and International Relations (DIIR) of Central Tibetan Administration (CTA) organised a plenary discussion on the topic ‘Changing Geopolitics: Why Tibet Remains the Core in India-China Relations’ following the launch of its flagship report titled ‘Tibet was never a part of China: But Middle Way Approach Remains a Viable Solution’ on 29 October 2018 at India International Centre, New Delhi.

The plenary discussion brought together a select group of academicians, experts, scholars, diplomats and journalists for a discussion covering various aspects of the India-China relations viz., territorial and border disputes, environmental impacts and water feuds, policy implications and delved on why Tibet forms the very core of India China relations.

President Dr Sangay in his opening remarks highlighted the significance of Tibet not only from the historical point of view but also in the current geopolitics where China is creating impediments in the rise of India as a global power. He also discussed the Belt and Road Initiative and the infrastructural development by China in the border areas leading to tensions between India and China. He said that it is imperative for India to formulate a China policy by making Tibet a core issue in its dealings with China for a long-term peaceful relationship.

Prof. Madhuri Sondhi, Director of M.L. Sondhi Institute for Pacific Asia Affairs, discussed the significance of Tibet in the India-China Territorial disputes. She highlighted the Tibet, India and China triangle and said that a lot of effort from the Indian government is spent on considering Pakistan as the enemy whereas China is the real problem for India. The border dispute between India and China is, in fact, the most troublesome one where a lot of territories is being conceded to China without even batting an eye.

Discussing his recent trip to Xinjiang, Prof. Siddiq Wahid, Senior Researcher at Centre for Policy Research, India, said that India is not prepared to take up the challenge that is China. Speaking on the topic of “Viewing Tibet, India and China relations through the Himalayan lens” he emphasised the importance of developing a Himalayan policy for the government of India to tackle the menace of China and in this policy Tibet should be kept at the core because ever-since the occupation of Tibet, the Himalayan region has become a “zone of conflict.” The homogenisation of culture through majoritarian rule should not be encouraged as it will only lead to further repression of the minorities.

Speaking on the recent developments of India-China relations and its impact on Tibet, Prof. Yeshi Choedon, an associate professor at Jawaharlal Nehru University, discussed the evolving Indian policy towards Tibet. Tibet may have been an issue of Tibetans alone in the early 60s and 70s but now it has become a global issue with the environmental and climate change and an issue of great significance for India with the ever-increasing border incursions, water feuds and geostrategic calculations of China. It is in India’s national interest to make the Tibet issue a core issue in its relation with China and try to find a dignified and honourable solution to the Tibet issue not only for the sake of Tibetans but also for the security and prosperity of people of Indian sub-continent as well.

The plenary discussion was followed by a question and answer session with the audience. It is important to note that from land to oceans, to rivers, China is flexing its muscles to the detriment of India. China has been constructing dams over major rivers of India like Brahmaputra and Indus, both originating from Tibet, leading to water feuds between the countries. China has even entered into a memorandum of understanding (MoU) with Pakistan to build two mega dams, Bhasha and Bunji, on the river Indus in Gilgit – Baltistan area triggering fresh alarms for India. These mega hydro projects have a huge impact on human habitat and environment causing huge financial consequences. The ecocide of Tibet is not only impacting Tibet’s environment but is also contributing to climate change and natural disasters in the region.

Given the ever-changing India’s policy toward China, the issue of Tibet has been evolving over the last 60 years. The discussion provided an opportunity to consider and explore crucial questions related to Tibet as one of the core strategic and geopolitical interests in the larger spectra of India-China relations. 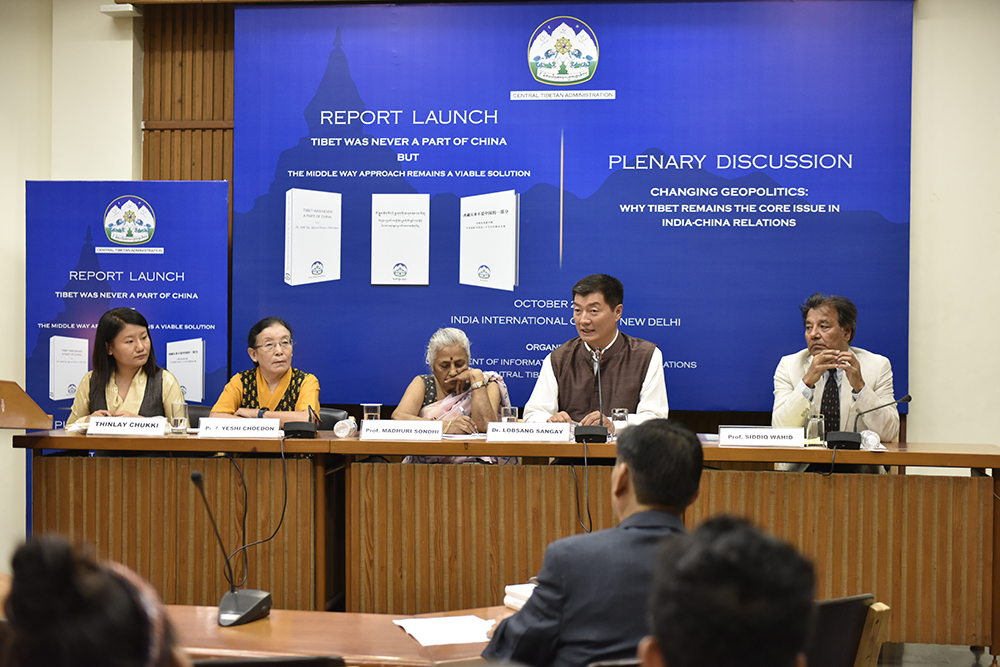 President Dr Lobsang Sangay speaking on the significance of Tibet not only from a historical point of view but also in the current geopolitics where China is creating impediments in the rise of India as a global power. Photo/Tenzin Phende/DIIR 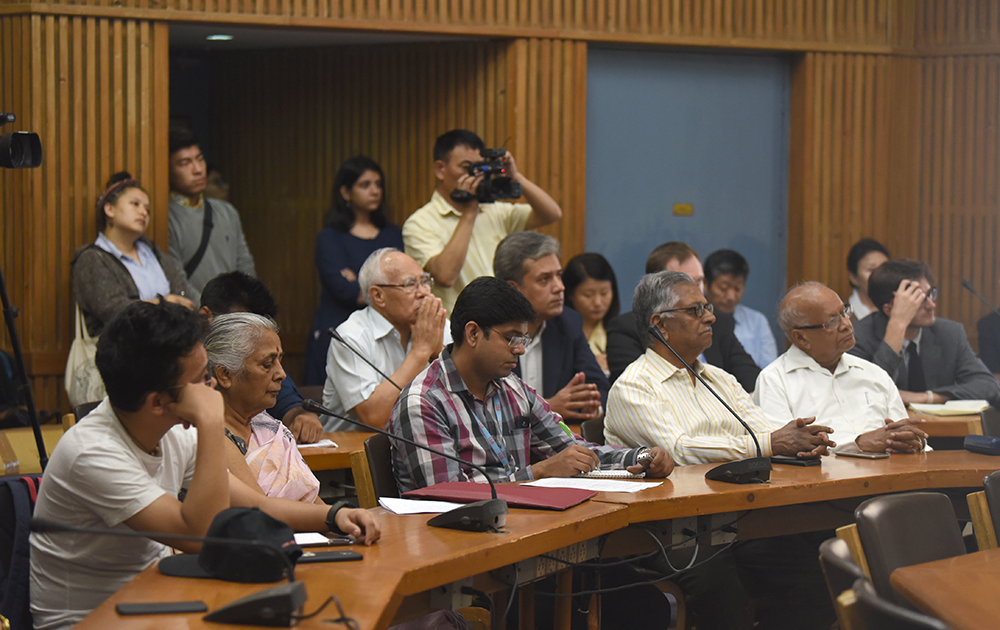 Academicians and Intellectual present at the report launch and the plenary discussion. Photo/Tenzin Phende/DIIR