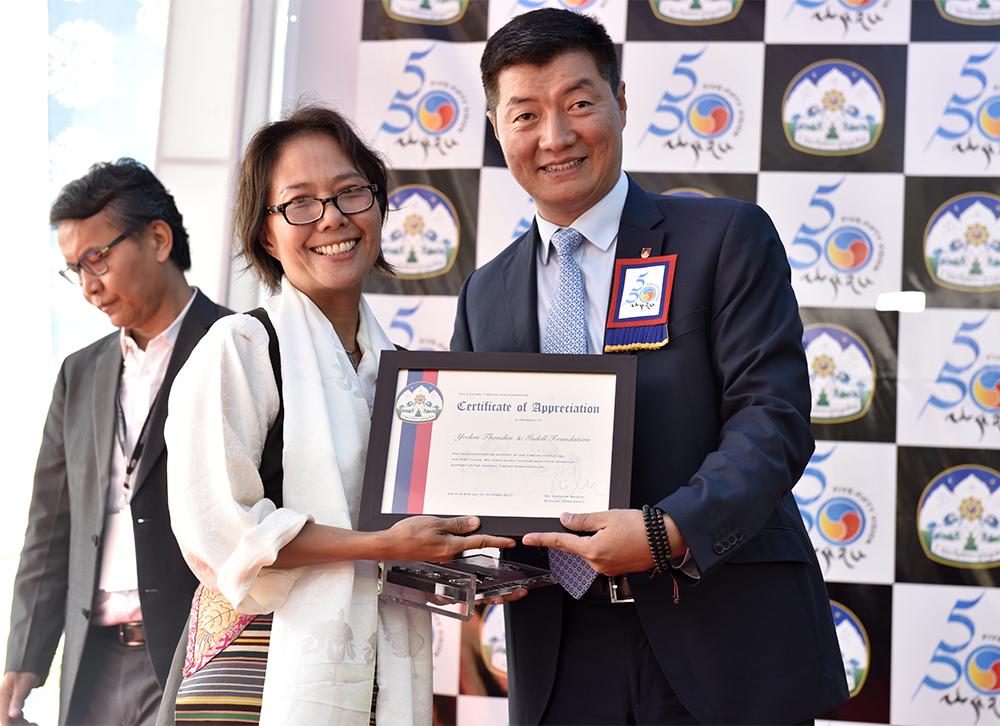 DHARAMSHALA, October 8, 2017: One thing that the Central Tibetan Administration (CTA) and numerous Tibetan organizations and individuals on the frontline of the Tibetan freedom movement share is gratitude to Yodon Thonden, her husband Kevin Toner, and The Isdell Foundation, which was established by Kevin in 1994.

The CTA recognized the enormous contribution that Yodon, Kevin, and The Isdell Foundation have made to the Tibetan community and cause through an exemplary philanthropy award presented to them by President Dr. Lobsang Sangay on October 8, 2017 at the Five-Fifty Forum: Shaping Tibet’s Political Future gathering in Dharamsala.

The Isdell Foundation, Yodon, and Kevin have contributed over seven million dollars to various Tibetan projects in India, North America, Europe and Tibet. Small and large financial support has either helped launch or has sustained numerous initiatives in the area of human rights, global advocacy and grassroots mobilization, visual arts, community and leadership development, and institutional strengthening. For many smaller organizations and initiatives, The Isdell Foundation has often served as a financial lifeline.

Major recipients that have received either seed funding, or program and core support, include the CTA, International Tibet Network, Students for a Free Tibet, Tibet Corps, Tibetan Community of New York & New Jersey (TCNYNJ), and Machik.  Significant support for film projects has included Tibet in Song (Ngawang Choephel), and Leaving Fear Behind (Dhondup Wangchen). Campaigns of note include the 2008 Beijing Olympics and the Tenzin Delek Rinpoche campaign.  A one million dollar grant was given to TCNJNY towards their community center project for refugee Tibetans in the New York City area.   Before pivoting to Tibet funding, Kevin provided major support through Isdell for the Burmese democracy movement in the 1990s.

Yodon la, Kevin, and Isdell are viewed as the ideal donor. They are strategic and back good people and projects without weighing the recipients down. They operate from a place of deep trust, modesty, and humility. The support provided is flexible, which makes a huge difference to the recipients. They rarely demand to be acknowledged and you will not see their logos splashed on recipient products and materials.  They also provide more than funds.  Yodon la incubated Tibet Corps for several years, developing the program with this writer and taking it on the road.   Kevin was the primary strategist advising the CTA in a successful effort to include a Tibet-related immigration component to the larger immigration bill that passed the US Senate in 2013.

“I am happy that CTA is recognizing Yodon la, Kevin, and Isdell Foundation’s work and contribution. I’ve known her and Kevin for almost twenty years. Their support made it possible for me to organize some of the Track II conferences when I was at Harvard. I hope other Tibetans with resources will see Yodon la as a role model and that her contribution can inspire greater philanthropy in the Tibetan community,” said Dr. Lobsang Sangay.

Yodon la was born in New York, but spent several years in India as a child when her pala served as the Representative of His Holiness the Dalai Lama and the CTA in New Delhi, and before that as Representative in New York.  She went to Harvard College, and then NYU Law School. She also worked for Human Rights Watch in their Children’s Rights Division. She serves on the boards of The Tibet Fund and The Dalai Lama Trust.  Kevin is originally from Ireland, graduated from Columbia University, and founded Aristeia Capital, an investment firm.  He also serves on the board of Earthjustice, a major US environmental litigation non-profit.

“I feel lucky and privileged to be Tibetan, and part of our movement for freedom and justice. I am grateful for the rich culture, nation, community and family into which I was born. I have been afforded many opportunities and privileges and am excited, and energized that I have been in a position to be able to contribute to Tibet, our people and the Tibetan freedom movement,” said Yodon Thonden la.