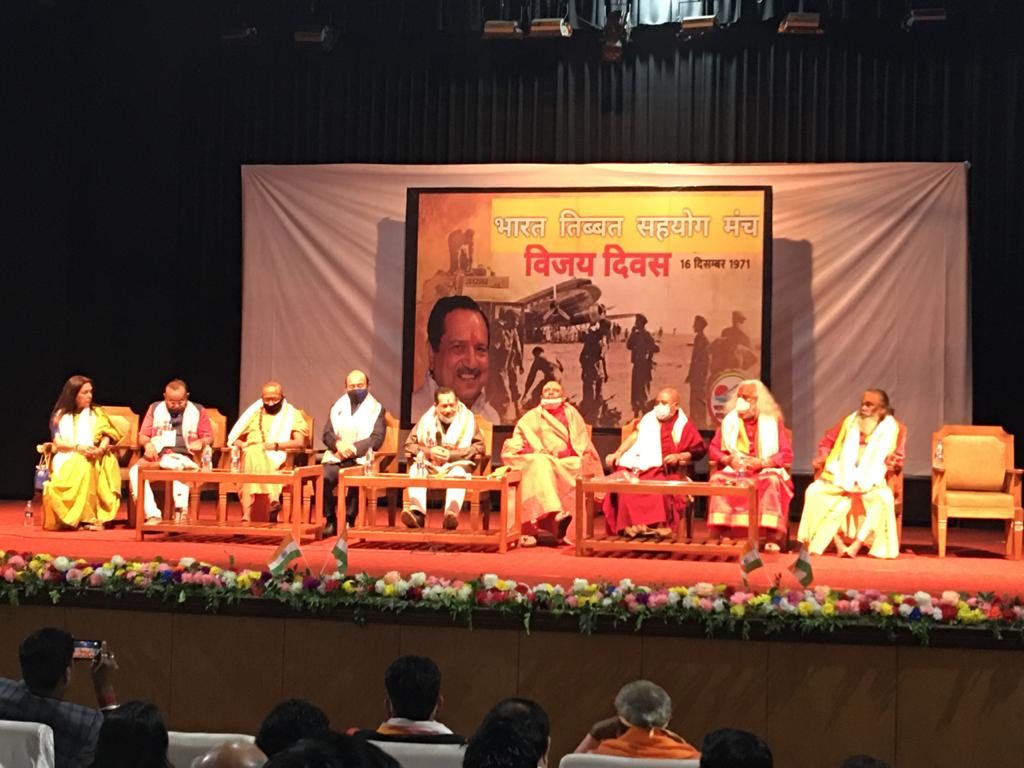 15 December 2020, Guwahati: Amid the existing pandemic situation and above all, adherence to local SOPs, the Bharat Tibbat Sahyog Manch held a two-day National Working Committee meeting at Sankardeva Kalakhetra, Guwahati on 15th and 16th December 2020. Around 150 working committee members have travelled from different regions to participate in this event.

Sh. Indresh Kumar and Ven Acharya Yeshi Phuntsok, Deputy Speaker of the Tibetan Parliament in Exile were the Chief Guests.

Sh. Pankaj Goyal, in his inaugural address, presented the outline of the 2 days meet – its agenda, relevance and urgency at this moment. He also gave the brief history of BTSM’s organizational history from 7 members at the beginning to more than 5000 members at 381 district levels of Indian states in the journey of 20 years since 1999.

Ven. Acharya Yeshi Phuntsok outlined his long-association with Sh. Indresh Kumar dating back to 1998. He also shared the brief history of his life – from his birth at Ladakh to his schooling in Shimla, from his higher studies in Varanasi to his involvement at Centrex, Tibetan Youth Congress, from his role at National Democratic Party of Tibet to his becoming of a Member of Tibetan Parliament, TPiE. Ven. Acharya Phuntsok, humbly submitted that all these accomplishments have been possible in his life not because of his effort but through the blessings of His Holiness the Dalai Lama and His leadership.

In addition, he lauded the script, objective and outreach of BTSM that has exceptionally contributed to engineering the struggle of Tibetan movement over these years. Taking this opportunity, he screened the present condition inside Tibet under Chinese Communist rule, continued oppression and exploitation of both Tibetan people and its natural resources, the ever-tightening grip upon the information and movement of Tibetan people, unchecked arrests and imprisonment of innocent people for months and years including the 11th Panchen Lama without any information of whereabouts.

He reminded the courageous acts of Tibetan people inside Tibet by self-immolating themselves despite the fact that many of these participants have not even seen Mao Tsetung and Deng Xiaoping, but their spirit and unshaken faith in their motherland and His Holiness the Dalai Lama remain. He concluded by expressing gratitude on behalf of the Tibetan Parliament in Exile, for being invited at this event and urged that as elder generations have already served their part in this journey, it is for the younger generation to take on the movement.

Swami Panchparmeshwar, Mahamandeleshwar from Madhya Pradesh, blessed the occasion with his prayer, saying that as a river engulfs everything on its way, but there are some who steer their own course of flow and leave their footprint. In this same manner, Swamiji urged the participants that this journey must reach its final destination.

Sh. Indresh Kumar, Patron, BTSM, in his address, remarked that it has been a matter of coincidence that BTSM is organizing three events at one place at one time – with the commemoration of Vijayadiwas, flagging off of 9th Tawang Yatra and meeting of Working Committee’s Members at Guwahati. He stated that BTSM and its movement, campaigns and impact are now being felt and acknowledged throughout India which were made possible by the selfless activists, members, volunteers and leaders at different levels.

In connection with the event, Manniya Indresh ji touched upon some key concerns that need to be discussed, analyzed and finalized for strengthening the organization and ensuring its ethical values that are its fundamental elements. Firstly, he reminded the outreach of India way back several thousand years – from the Hind Mahasagar to the Hindu Kush during which the sea route that was used for trade and commerce from East to West was Malay Sagar. The foreign traders and visitors required to take permission from India to engage in investment through this route. The business transactions have always been very friendly and cordial until the beginning of the 21st century. Whereas in that course of time, China constituted a reckless Communist government, making many of those governments engaged in trade and commerce feel threatened by the amplification of China’s muscle-power and military. It has further resulted in the illegal occupation of Tibet due to which the people of Tibet are facing a hell-like situation inside Tibet and become a minority within their own country.

Secondly, Tibet as the world’s highest plateau is a repository of glacier and the origin of major rivers of the world, particularly of Asia, over which China has encroached, threatening the livelihood of riparian states downstream from India to Myanmar, Laos, Cambodia, Vietnam and others. This would mean a very serious ecological unbalance upon the existence of living kind in these regions. Although India has consistently reviewed the water treaty in recent years, it must be combined with the Indian people raising their voice against these encroachments upon rivers in Tibet and ultimately it should create pressure on the Chinese Government to revisit their expansionist policies.

Thirdly, in recent months, China has been building up new threats at the Indian border with LAC and LOC to which the Government and People of India have responded strongly driving the lesson home that India hasn’t remained the same that it was 60 years before. As of today, the expansion of Indian Air’s reach in 2 hours in the Indian border as compared to 7 hours of Chinese Air reach in the Tibetan border. Similarly, 2 days-time required for Indian military assistance to its border is comparable to 7 days for Chinese armies to facilitate their military assistance, a small example of the present Government of India’s achievement in the last couple of years in ensuring its dignity, legacy and fraternity.

Fourthly, Chinese Communist Government’s role in destabilizing India’s peace, progress and solidarity by sponsoring terrorism and insurgencies within India has to be dealt with hammering upon their economy and goods that has engulfed the world market in the recent decades. Boycotting of Chinese goods and vocalizing for local goods– an initiative that has been taken very strongly and actively by various organizations including BTSM is emerging to the surface. Shri. Indresh ji also pointed out that the so-called Corona Virus is a biological lab-made virus by CCP to derail the world economy and to spearhead their single Communist ideology to delete other trails of mankind. He concluded by urging the participants that this meeting must bring a renewed energy emphasising the role of India at this critical juncture, seeing how China has dealt with Tibet in the past, Hongkong and Taiwan in the present day.

Sh. R. K. Khrimey, as the Guest of Honor and the Vice President of BTSM, in his address, outlined the essence and timing of this meeting. He shared that it is his dream and also the aspiration of BTSM to see the prideful return of His Holiness the Dalai Lama to Tibet in his lifetime. Conveying a strong message to Beijing, Sh. Khrimey asserted that regardless of China’s territorial claims over Arunachal Pradesh and other states of North Eastern India being inclined towards China’s territorial integrity, the people of these regions will always remain inclusive with the spirit of Akhand Bharat. He further stated that what we have achieved so far must be rendered as capital to achieve and reach the final course of its destination i.e., Tibbat Ki Mukti. 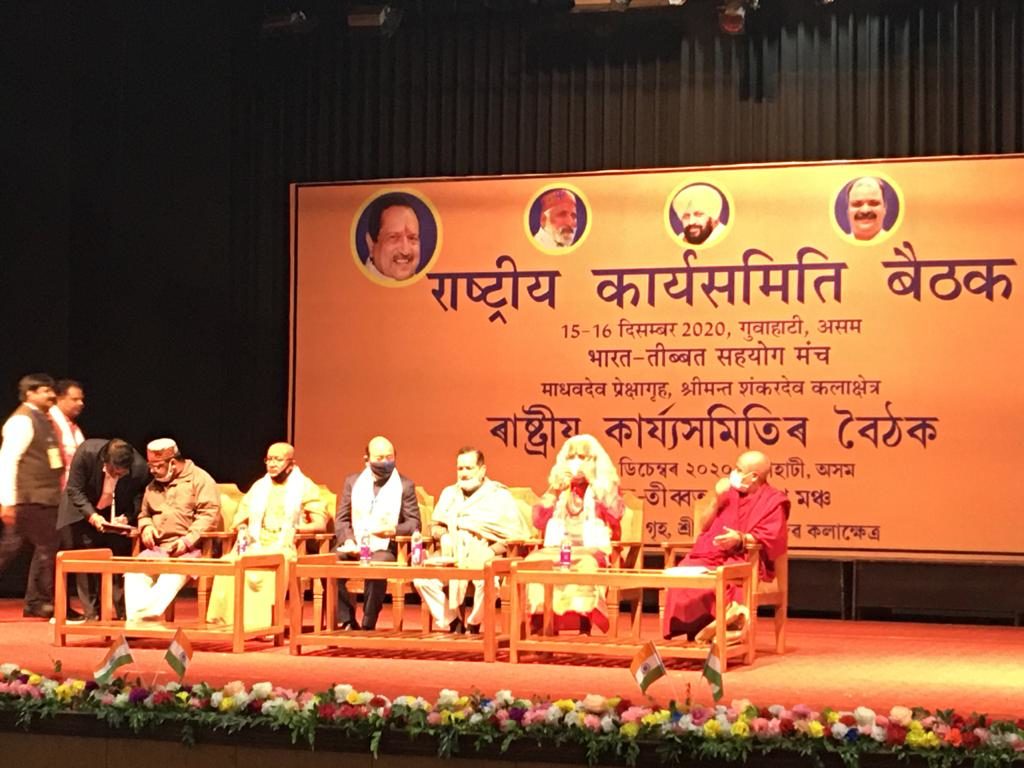 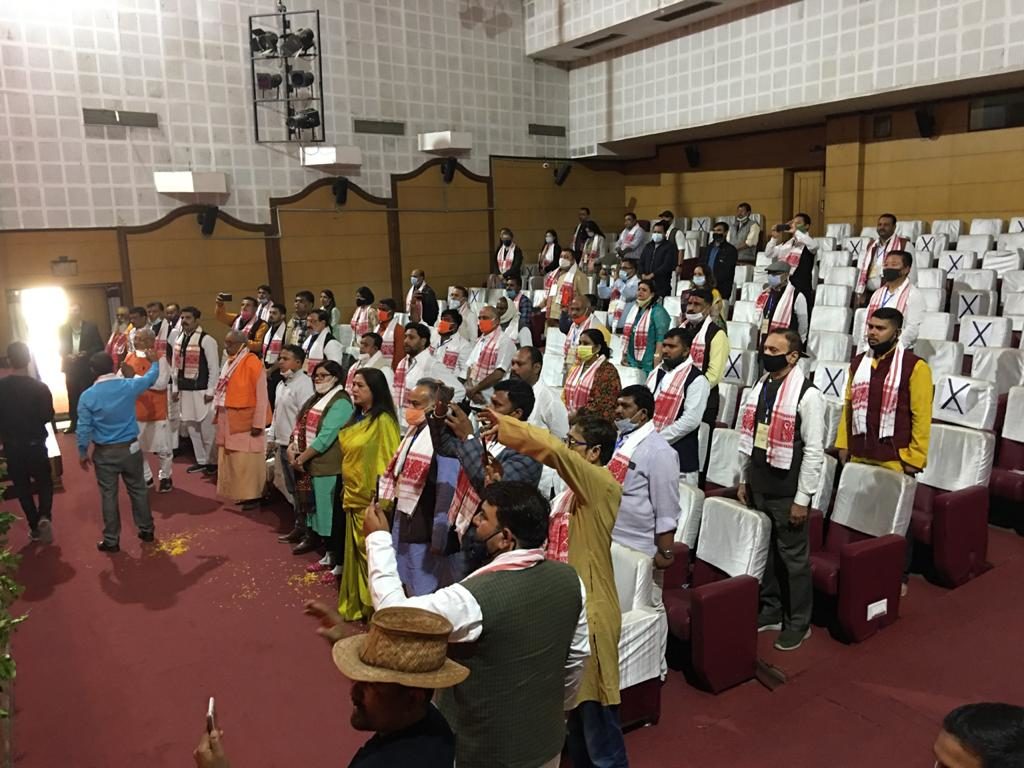 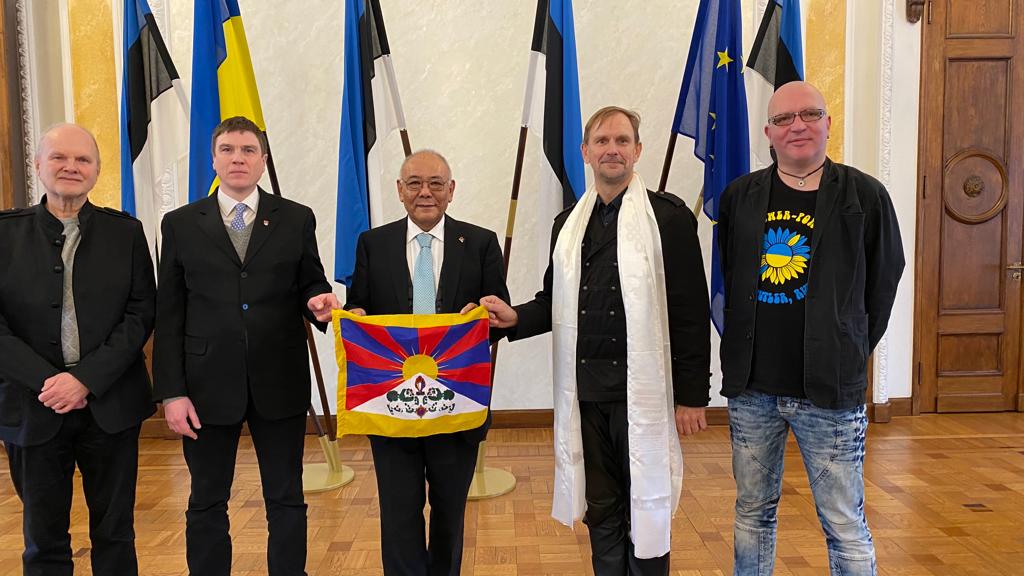 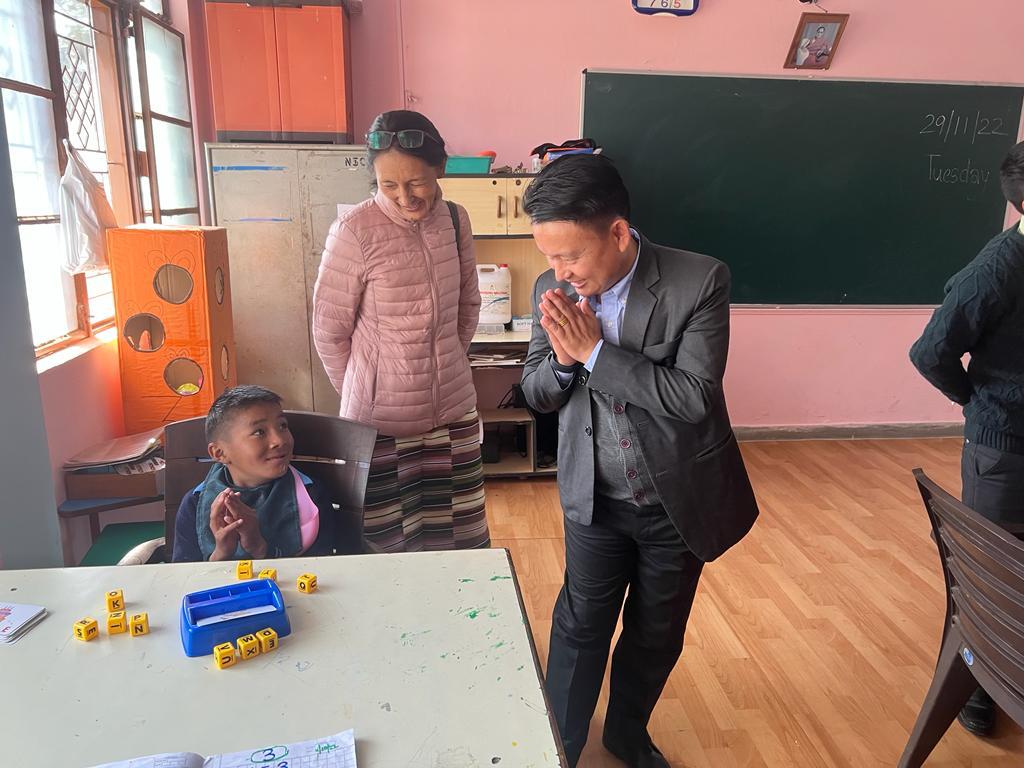 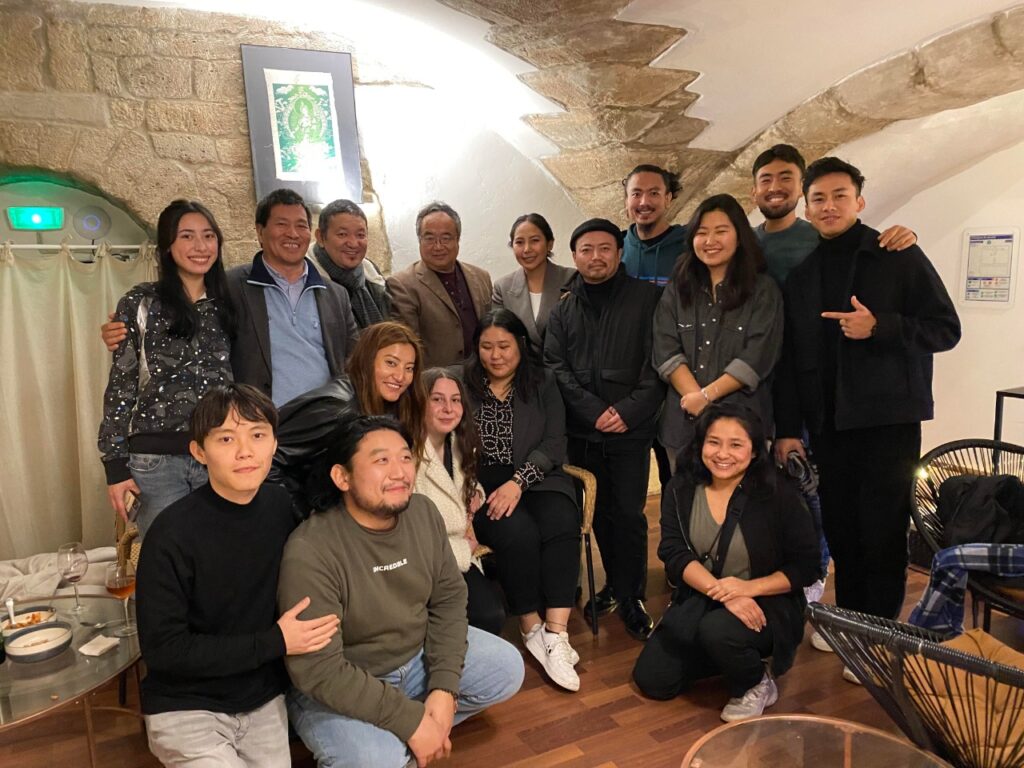 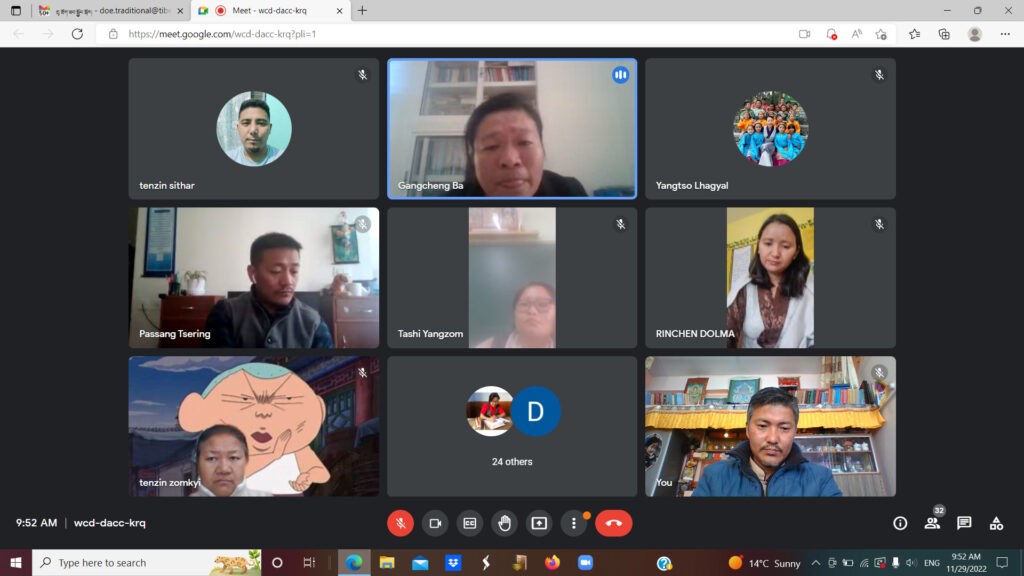