Beyond Religion: Ethics for a Whole World

Ten years ago, in his book “Ethics for a New Millennium”, His Holiness the Dalai Lama first proposed an approach to ethics based on universal rather than religious principles. 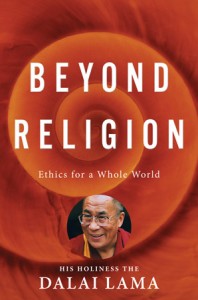 Beyond Religion: Ethics for a Whole World

Now, in “Beyond Religion”, the Dalai Lama, at his most compassionate and outspoken, elaborates and deepens his vision for the nonreligious way. Transcending the mere “religion wars,” he outlines a system of secular ethics that gives tolerant respect to religion—those that ground ethics in a belief in God and an afterlife, and those that understand good actions as leading to better states of existence in future lives. And yet, with the highest level of spiritual and intellectual authority, the Dalai Lama makes a claim for what he calls a third way. This is a system of secular ethics that transcends religion as a way to recognize our common humanity and so contributes to a global human community based on understanding and mutual respect

Houghton Mifflin Harcourt in the USA