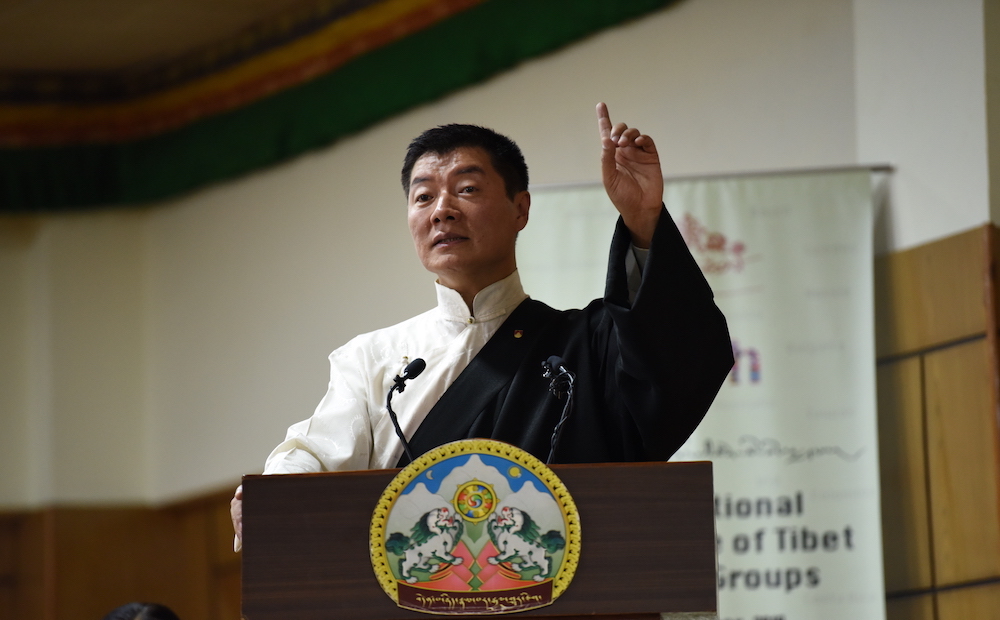 Dharamshala: For the next three days, 180 political leaders, MPs, Tibet Support Groups, policymakers, pro-democracy activists, intellectuals including Chinese scholars across 42 countries will be deliberating on galvanising global Tibet advocacy at the 8th International Conference of Tibet Support Groups being held here in Dharamshala.

The 8th edition of International Tibet Support Groups conference is dedicated to consolidating efforts on how to steer the Tibet issue on the forefront, build a conducive environment for multilateral coalitions on proactive Tibet campaigns and to further the Central Tibetan Administration’s Middle Way Policy with the view to renewing the Sino-Tibet dialogue.

The discussions will largely pertain to charting out concrete action plans for the future course of global Tibet advocacy, mainly on optimizing engagement with the Chinese authorities on Tibet issue.

The Conference is being convened by the Core Group for the Tibetan Cause, India under the facilitation of the Department of Information and International Relations, CTA.

The inaugural plenary hosted a keynote address by the President of CTA, Dr Lobsang Sangay, preceded by the Speaker of Tibetan Parliament, Pema Jungney’s address and the National Convenor of Core Group for Tibetan Cause, Shri Rinchen Khando Khrimey’s welcome address.

Setting the tone for the largest global convention on Tibet, President Dr Lobsang Sangay said the era of the 1990s people’s resistance movement is returning in full power, challenging authoritarian and repressive regimes around the world. In such an opportune environment, he said, the international community and stakeholders must step up activism for human rights and religious freedom in Tibet into the highest gear.

“We are on the verge of entering the 1990s era,” said President Dr Sangay. “As I read in news recently the Prime Minister of Lebanon resigned because of the consistent people’s protest from the grassroots level. PM of Iraq resigned just yesterday because of people’s protest in Iraq. People’s protest in Istanbul, in Turkey, Venezuela, everywhere! And of course, our dear friends in Hong Kong who have been persistently and consistently leading the people’s protest. The 1990s is back and the world is shaking for more Freedom, more human rights and more democracy.”

“And our friends in Hongkong, East Turkestan and Taiwan are making it loud and clear that we are here not for a few weeks, not for a few months but for the long haul.”

“The 90s was the peak stage of the Tibetan movement. Why? Mass movement around the world shook the earth and brought changes, including democracy and human rights around the world,” he added. “In this changing landscape, as Tibet support Groups we have to tighten our belt and march forward for some more years, into some more activities around the world so that we can march towards Lhasa very soon.”

He said, “Recently the US Ambassador at large for International Religious Freedom, Sam Brownback came here to Dharamshala at the invitation of CTA and made the strongest speech in support of Tibetan religious freedom and reincarnation, after what we had recently concluded as the 3rd Special General body meeting of Tibetan representatives.

“And the Ambassador Brownback agreed upon the resolutions passed at the Special Meeting and said that in his speech which was approved by the US State Department and the White House that official stance of the US Government is to support the Tibetan stance on reincarnation.”

Early October this year, the largest body of Tibetan people’s representatives unanimously passed a four-point resolution in response to the Chinese Communist Party’s advancing interference. The resolutions re-affirmed the relationship between the lineage of Dalai Lamas and Tibetan people as inseparable and inevitable; called for the lineage of successive reincarnations of His Holiness the Dalai Lama to continue; asserted the sole authority of His Holiness and the duly empowered officials of the Gaden Phodrang Trust with regard to the reincarnation and finally, it outrightly rejected China’s interference in process for the discovery and recognition of reincarnations in Tibetan Buddhism in general and especially its coercive Order No. 5.

Further in the context, Sikyong said, “The traditional reincarnation system was invented by Tibetans. The Tulku system is a thousand years old. We invented it so we have complete copyright over it, patent over it. China can manufacture a lot of duplicate things but they can not make duplicates of the reincarnation system. This is originally ours; Tibetan own it.”

He categorically stated that there’s no room for questions or debates on the ownership of Reincarnation for the Reincarnation tradition was invented by Tibetans a thousand years ago, “in 4000 meters high Tibetan plateau with the blessings of gods and deities of Tibet.”

“Some countries propose to mediate and suggest that there can be one Dalai Lama from the Chinese side and one from the Tibetan side. On reincarnation, there is no common ground! We must make our argument loud and clear. This is an issue of religious freedom and no one can interfere.” 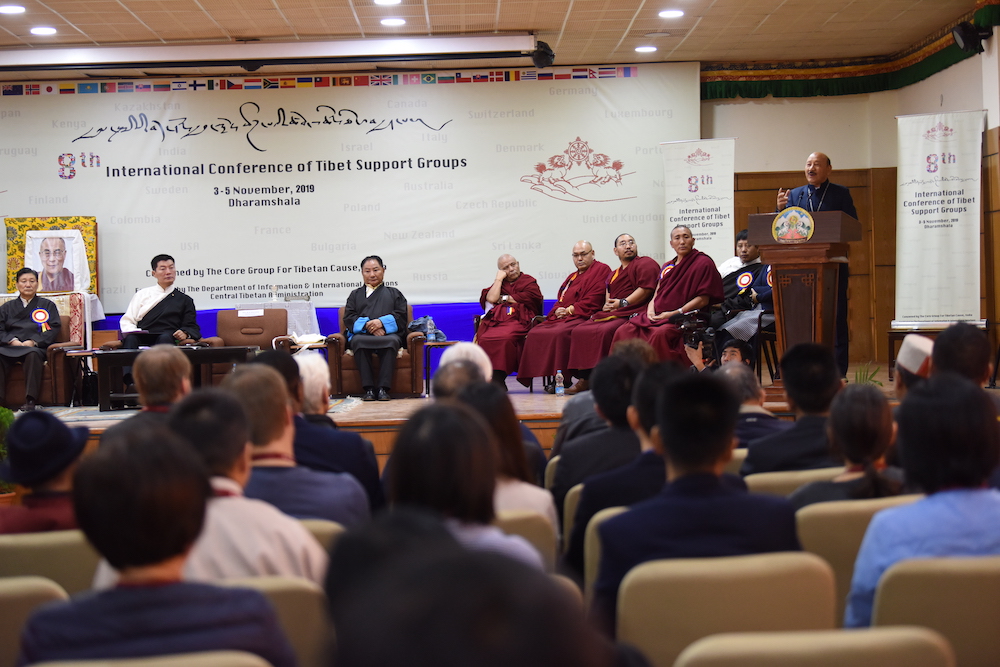 Sikyong took a moment to thank the gathering of 180-strong representatives of Tibet Support Groups, saying that “their efforts, big or small, makes the difference.” Quoting His Holiness, he said, ‘You all are not simply pro-Tibet but you are pro-justice.’

He also declared that Tibetans worldwide led by the CTA will observe the year 2020 as a year of saying thank you to His Holiness.

In conclusion, Sikyong hailed the 8th International TSG Conference a hugely auspicious event given the auspicious symbolism of the no. 8 in Chinese numerology.

“Today is the 8th International Tibet Support Group conference. In Chinese, no. 8 is Bā [Chin: 八] means prosperity which is why the Chinese Olympic was held on 8 August 2008 at 8.8 pm. So it is Bā, prosperity for Tibet is going to happen through this conference. In 1990, 8 resolutions were passed. From this conference, we have to pass 8 different campaigns. Coincidently, 88 different groups have come to this conference and in 2011, I took the oath on August 8th, sending a message to China that during my tenure, prosperity after prosperity will happen. And it has! Dharamshala has prospered.”

“Bā conference will lead to Bā[prosperity] for Tibet and that’s how His Holiness the Dalai Lama will return to Tibet, basic freedom will be restored in Tibet and Tibetans in and outside Tibet will be reunited. And we will have the 9th TSG conference in Tibet. We are the Bā conference moving to the 9th. So it is all good,” he concluded.

Sri RK Khrimey, National Convenor for Core Group for Tibetan Cause, while introducing the regional and national level Tibet support group chapters in India, said that over 16 major organisations and 300 local chapters have been voluntarily and actively mobilising efforts for the Tibetan cause sine the time His Holiness the Dalai Lama stepped on Indian soil as a refugee.

“These NGOs, voluntary organizations have been working since the day, the year when His Holiness the Dalai Lama has landed in our country India because this was the first voice in our Indian parliament at the time to liberate every inch of Indian land occupied by China, and secondly to liberate Tibet. These were the resolutions.”

The former Indian Minister announced that the recently convened 6th All India Tibet Support Group Conference issued a declaration acknowledging and extending complete support to the Middle Way Approach policy as the official political stand of the Central Tibetan Administration vis-à-vis the outstanding Tibet issue and secondly, to bolster support in initiating constructive negotiations between the envoys of His Holiness the Dalai Lama and the Chinese government.

He also made clear that the TSGs accords the complete understanding of the Middle Way Policy as espoused by the Central Tibetan Administration and will accordingly align activities based on the CTA’s MWA.

“As concerned with India we have a powerful and popular prime minister who has been established as the most powerful leader in the world in the short span of 5 years. We have full faith in our Prime Minister that he will take the Tibet cause on an appropriate time for the problems to be solved. So therefore with his leadership and confidence, the issue of Tibet will come with a solution and will be solved,” he said.

He also heaped admirations for the leadership of President Dr Sangay and spirit and determination of Tibetan people inside Tibet as well as those in exile who have persevered a long hard struggle and continue to do so.

“So, therefore, I heartily welcome you with a commitment towards a mission. We would like to see some solution to come during the lifetime of His Holiness the 14th Dalai Lama so that he can honourably go to his motherland ad re-establish the authority. This is our urgency that we have to work towards,” he concluded.

Speaker Puma Jungney, Tibetan Parliament-in-Exile, presiding over the plenary as the chief guest said, “During our earlier years of exile, Tibetan people and Central Tibetan Administration received minimum support and attention from the International communities. However, in the late 1980s, His Holiness the 14th Dalai Lama, Central Tibetan Administration and very few Tibet Support Groups succeeded in gaining attention from international media and public for the issue of Tibet. Thus in 1990, Central Tibetan Administration held the First International Conference on Tibet Support Groups in Dharamsala to bring more awareness about the issue of Tibet on a broader platform and to garner more support from the international communities. Today, we have more than 250 Tibet Support Groups, who are working actively towards resolving the issue of Tibet.”

As he thanked the delegates for their enduring and unrelenting support and activism for Tibet, he remained that until 1979, CTA and the Tibetan people adopted a policy of seeking independence for Tibet since Tibet was an independent country before the illegal occupation.

“But then, with the changes in the independent status of countries and nationalities in the world, His Holiness the 14th Dalai Lama came up with the great vision of Middle Way Approach as the most sensible step in solving the conflicts of Tibet and China in the early 1970s.”

“There have been seven International Conferences on Tibet Support Groups and in all these conferences, Central Tibetan Administration has, again and again, requested you to acknowledge this mutually beneficial steps in solving the cause of Tibet and today on this 8th International Conference too, we appeal you once more to follow the Middle Way Approach in working towards Tibetan movement. As you all are aware that this Approach is the political stand of the Central Tibetan Administration.”

The delegates of the conference are scheduled to receive an audience with Tibetan spiritual leader, His Holiness the Dalai Lama tomorrow. 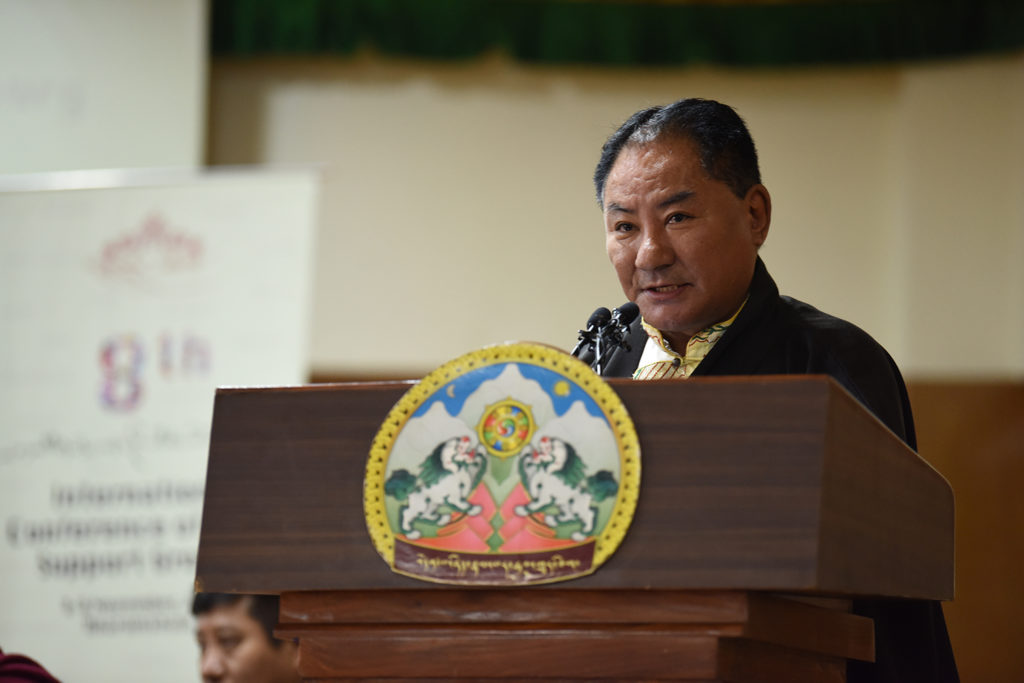 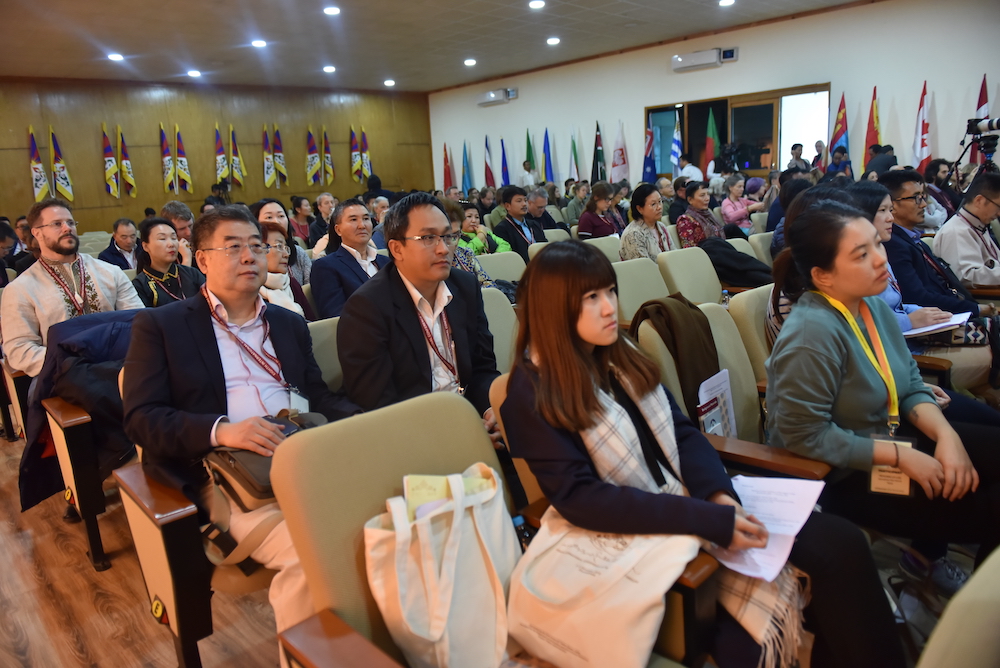 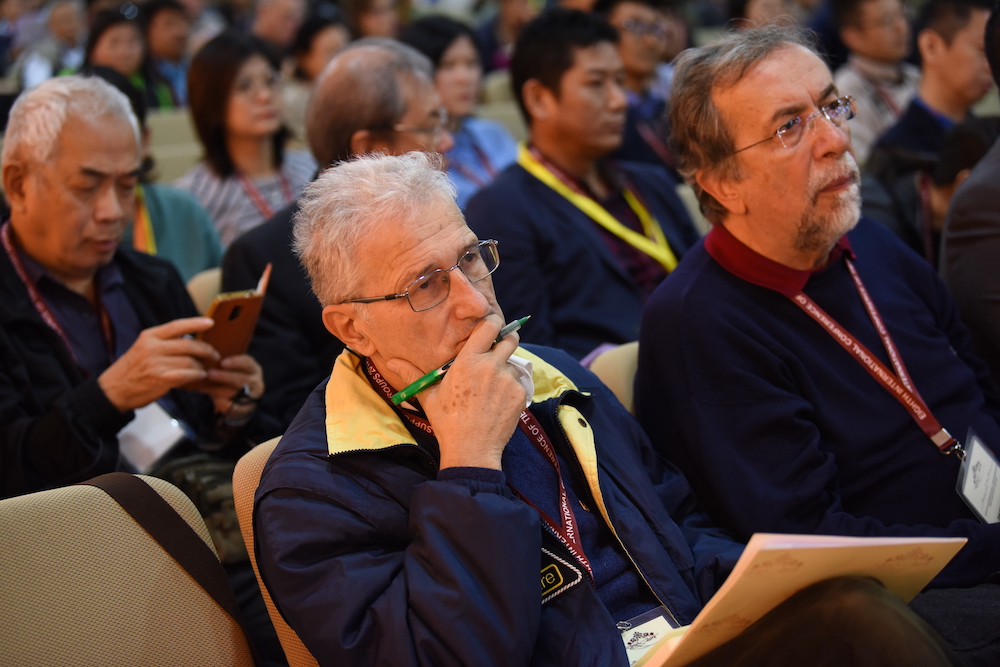 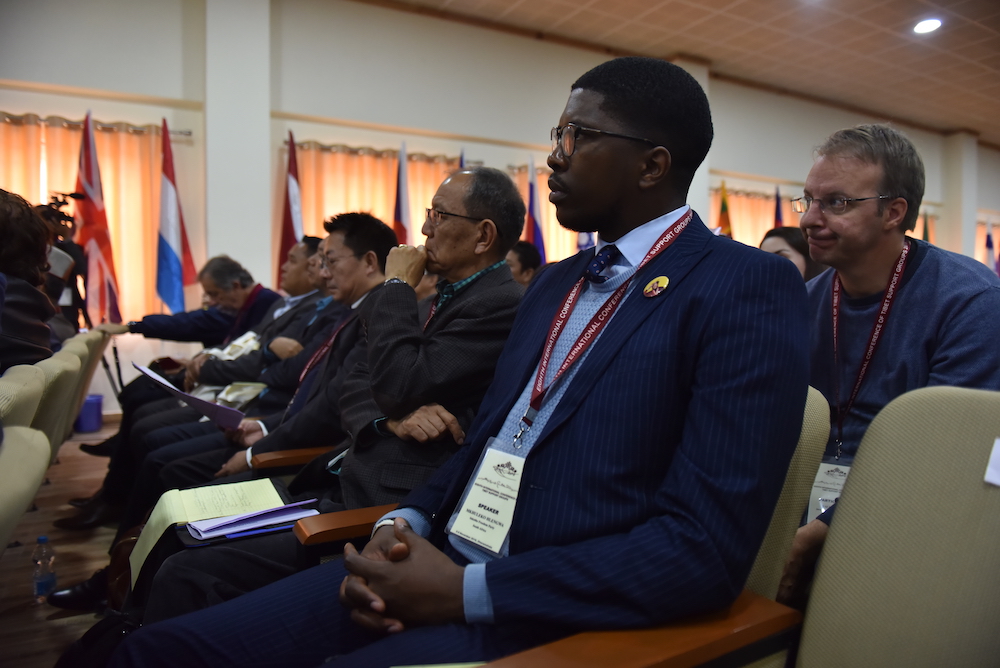 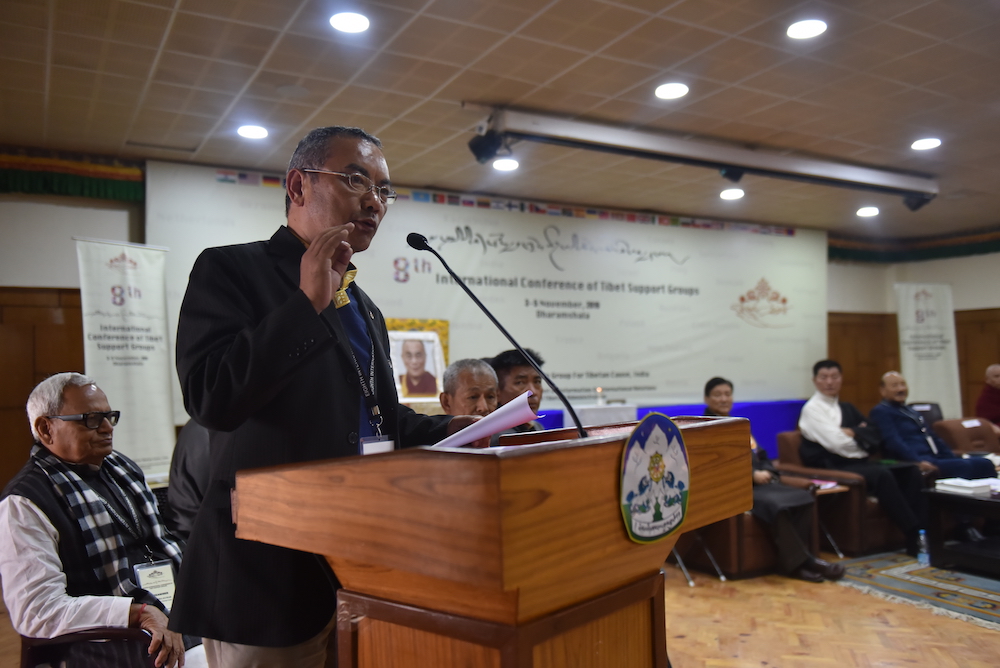 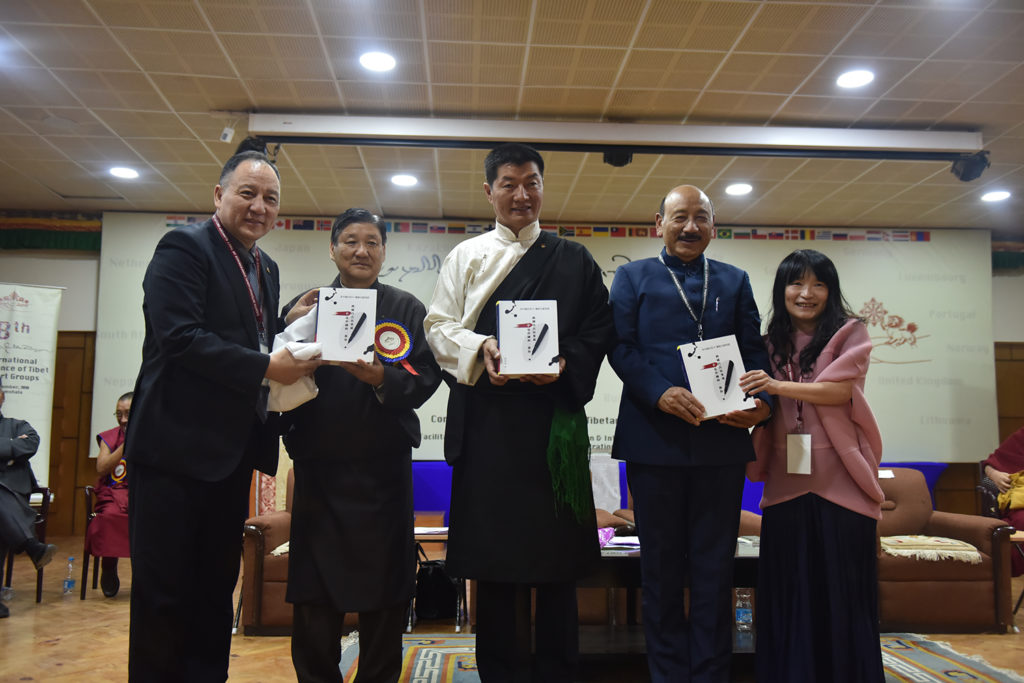 President Dr Sangay unveils a book published by the Office of Tibet, Taiwan on the historical status of Tibet as an independent country based on the official Chinese documents.