Access to the TAR and other Tibetan areas did not improve in 2019: US State Department 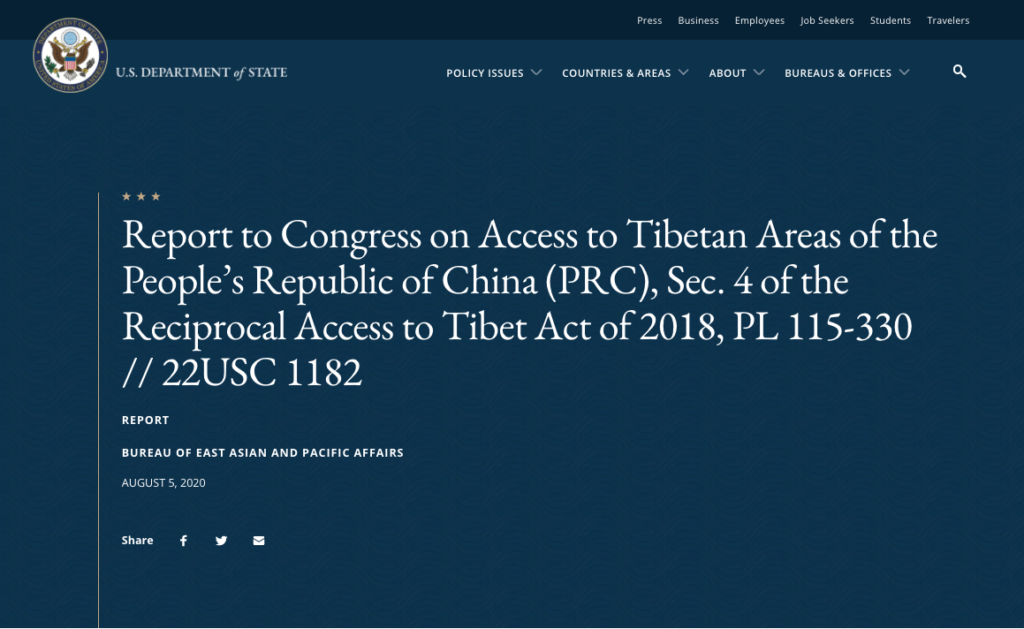 Access to the TAR and other Tibetan areas did not improve in 2019: US State Department

The report mentioned about Chinese government’s systematic impediment of travel to the Tibetan Autonomous Region (TAR) and Tibetan areas outside the TAR for U.S. diplomats and officials, journalists, and tourists in 2019. The report also mentioned that the approval for tourist travel to the TAR was easier to get but often restricted during sensitive dates.

The report highlights that the travel to Tibetan areas outside of the TAR did not require a permit. However, requests to meet with government, religious, and civil society leaders in these areas were routinely denied.

TAR continued to be the only area of China for which the Chinese government required diplomats and other foreign officials to request permission to visit and purchase of air and train tickets to the TAR is not possible without official approval. In 2019, out of ten official requests from the U.S. diplomatic mission in China to visit TAR, five were denied. When U.S. diplomats received permission through the TAR Foreign Affairs Office (FAQ) to travel to the TAR, FAQ and security personnel tightly chaperoned their trips.

The report details various instances where the diplomats travelling in the Tibetan areas of Kardze (Ch: Ganzi) and Ngaba (Ch: Aba) Tibetan Autonomous Prefectures (TAPs) were routinely stopped and questioned by security officials. Unlike 2017 and 2018, security officials did not physically detain diplomats.

Access to the Tibetan population of the PRC did not improve in 2019 compared to 2018. While there was a slight increase in the total number of visits to the TAR, official chaperones and security personnel prevented U.S. diplomats from fully engaging with Tibetan residents.

The report also brought the instance where several Tibetan invitees to lunch hosted by the U.S. consul general in Chengdu were stopped by security officials and prevented from attending. Any attempts to speak with locals in TAR and in Tibetan areas of Sichuan province were quickly broken up by security officials.

While responding to the report, Karma Choeying, Secretary of Department of Information and International Relations, CTA, remarked, “It is apparent from the report that the TAR and other Tibetan areas are still off limits for foreign visitors. As a result, Tibetans continue to suffer under Chinese rule in complete isolation. The world must pay serious attention to the plight of the Tibetan people who have endured Chinese repression for more than sixty years now.”