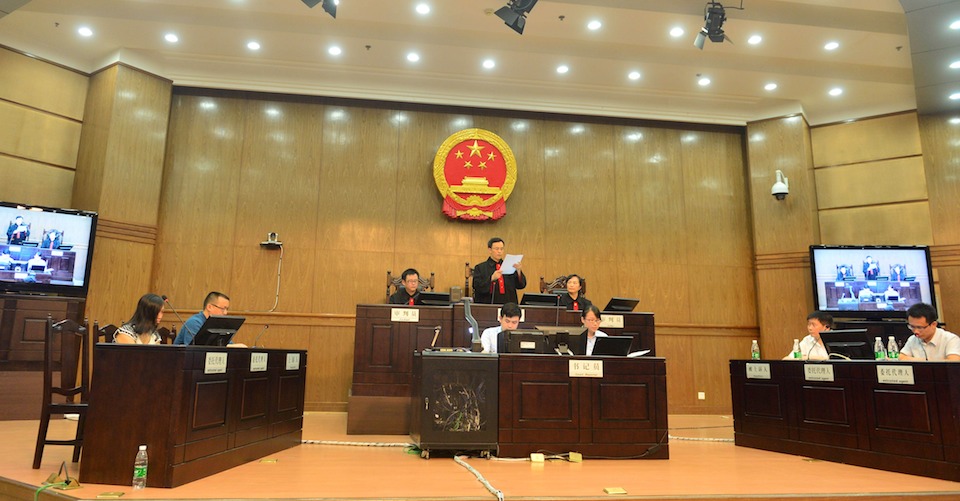 China rape victim’s mother Tang Hui (L) sits in the Hunan Provincial People’s High Court in Changsha, central China’s Hunan province on July 15, 2013. The court awarded damages to the mother of a rape victim after she was sent to a labour camp for demanding her daughter’s attackers be punished, a spokesman said on July 15. CHINA OUT AFP PHOTO (Photo credit should read STR/AFP/Getty Images)

A growing number of trials will be live-streamed in HD. What might that mean for justice in a black-box judiciary?

Transparency; sunlight; public oversight. These may not be words one associates with China’s judicial system, with its publicized history of sham trials, forced confessions, and backchannel Communist Party meddling in nominally independent legal decisions. But on Sept. 27, Zhou Qiang, the chief justice of China’s Supreme People’s Court (SPC) and head of the country’s judiciary, announced the debut of an impressive new website, the Chinese Open Trial Network. It already boasts full, high-definition videos of over 67,000 criminal, administrative, and civil proceedings. So far that content comes from only a handful of courts, including all open SPC hearings and some carefully selected lower court hearings. According to private Internet behemoth Sina Corp., which operates the site, as many as 3,500 courts will participate by 2018, uploading videos for at least 1 million cases from the nation’s roughly 12 million per year. Hundreds of thousands of additional videos have already been uploaded to local court websites, but have not yet been integrated into the new platform.

To those familiar with China’s legal system, the new site is welcome, and counts as the boldest of several recent measures recently taken to enhance judicial transparency. On its face, this level of transparency seems almost radical compared to the United States, where cameras are still generally barred from U.S. federal court proceedings and some state courts. The SPC’s likely motive is to persuade Chinese citizens that the country’s judiciary is an efficient, modern institution. Chinese can now use the site to watch an accused drug dealer in Guangdong Province appeal his conviction, take in a contract dispute in the financial center of Shanghai, or even revisit Michael Jordan’s ill-fated appeal to China’s highest court in April in an effort to protect his Chinese name against the domestic shoe company that trademarked it. There’s no question that streaming court hearings — despite the initiative’s obvious limits, selective implementation, and inadequate protection of the privacy of the participants — will expand public awareness of China’s courts. It is linked to the powerful Party Central Committee’s October 2014 stated goal to ”strive to have the people feel fairness and justice in every judicial case” and to strengthen judicial supervision by the public. Yet it’s unlikely to significantly improve China’s ailing and often unjust judicial system in the absence of far more basic reforms.

Although Chinese trial judges have long been concerned about the impact of the media and public opinion on shaping judgments, their key audience continues to be their superiors in the judiciary, not the online viewing masses. The leadership of the court involved must approve all important decisions as well as the streaming of every case; those court leaders must, in turn, please their own superiors in a chain stretching all the way to Beijing. An editorial on “judicial standardization” in the Communist Party’s People’s Daily, published one day before the new site’s public launch, provides a clue to the central government’s reasons for placing live cameras in courtrooms nationwide. The article, written by the president of the important High Court of the northeastern city of Tianjin, stressed that judicial supervision, and the standardization it begets, will transmogrify “isolated, fragmented, abstract norms” into a set of “systematic, scientific, and evaluable standards” — language that hints at Beijing’s desire to assert greater control over a vast, dispersed legal system and minimize the plague of every country’s judicial system: inconsistent judgments.

This welcome initiative should be viewed together with China’s current, ambitious campaign to improve the reputation and compensation of judges and prosecutors by winnowing out the many official legal staff who bear the label of “judge” or “prosecutor,” but who do not actually have the competence or reliability to carry out the work expected.

Beijing hopes to create a true judicial elite, separate from the regular bureaucracy, and to reduce the distorting impact on lower-court decisions of political interference, corruption, guanxi (relationships), local protectionism, and local Party and government influence. Yet the goal of trimming judicial personnel by well over half has proved challenging. Courts are attempting to do so using a quota system that has in practice favored senior, often less competent officials, and it appears to be creating serious morale problems, contributing to a large number of recent resignations by younger, overworked, and underpaid judges and prosecutors.

Regionalism is also a factor. Despite enormous advances in legal education during the past generation, the quality of China’s court personnel remains uneven, with less developed localities displaying a significantly lower level of judicial experience and professionalism than major cities, with their higher judicial salaries, educated populations, and frequent, sophisticated commercial disputes. This inequality is bad news for the People’s Republic; it further undermines public confidence in the system, makes judicial outcomes harder for private actors and government officials to foresee, and promotes meddling in local courts by local Party bosses and others who don’t always put the plans and interests of the central government above their own.

In announcing the new national site, Zhou styled streaming as a mechanism to “force judges to raise the quality of their trials and their judicial abilities.” The hope is that this will increase respect for China’s judicial process among citizens, who widely mistrust it now. In addition to influencing and educating viewers, the site may also become an instruction tool for training the judiciary itself. Even though China is only beginning to experiment with a precedent-based system, judges preparing for trial should find it useful to watch how colleagues conduct similar cases. Judges need authoritative guidance in many aspects of their work, particularly because Chinese legislation often lacks detail and consistency. For that reason, in recent years the SPC, in addition to issuing authoritative “interpretations” and other aids for applying legislation, has begun (with much fanfare) to publish a small number of “guiding cases” to assist lower courts in handling certain archetypal disputes. But in practice, their role has been modest.

Streaming will also challenge prosecutors and lawyers to do (and appear to do) a better job in court. It would be significant, for example, if the new digital spotlight prodded both prosecutors and lawyers to learn how to cross-examine witnesses in court. But that would require the system to compel usually reluctant witnesses to show up for trial while shielding them from the risk of retaliation. (Current rules permit witnesses to give written testimony and escape cross-examination, often called the greatest instrument for the discovery of truth in any legal system.) Yet judicial policy that now seeks to make trials the focal point for court decisions will require Beijing to devote far greater resources to hearings. This in turn will spur existing attempts to develop a system of “plea bargaining with Chinese characteristics” so that only genuinely contested cases receive full hearings from already-overworked judges. Without it, the judicial hearing system will break down from overload, just as the U.S. system would without plea-bargaining.

Procedural changes of this magnitude, however, will require substantial political as well as economic support from government leaders. Will President Xi Jinping, who early in his administration declared his determination to “enable the people to feel that justice is served in every case before the courts,” provide the necessary muscle? Without it, no website can prove significant.

Another crucial question is whether lawyers will be allowed to interpret for the general public what the website shows. Without assistance from lawyers, most viewers outside of the legal profession are unlikely to understand what they are seeing on the slick new site. Despite repeated SPC admonitions and some recent progress, Chinese court opinions still often contain too little legal reasoning, instead mostly reciting the basic facts and the ruling. Making sense of judicial outcomes, and explaining procedural issues to the public, will thus require lawyers and other legal experts (whether they are involved in the cases being streamed or not) speaking and writing freely.

To be sure, some criticism of court judgments already occurs on popular mobile app WeChat’s public-facing accounts, and judges themselves occasionally comment about broadcasted hearings. But a 2013 law bans defense lawyers from “broadcasting the situation inside the courtroom via email, blogs, micro-blogs, or other means,” which one lawyer complained “makes open trials secret.” And a spate of recent arrests of rights lawyers — and accompanying smear campaigns in official media — make clear the penalty for activist lawyers who would use the latent power of social media to rally the masses against procedural or substantive injustice. Much will depend on how existing controls are applied in practice against lawyers seeking to comment on the new broadcasts. Revealingly, although the website initiative is supposed to bring “sunlight” to the judicial process, the online interface currently provides no mechanism for comment beyond feedback on video quality. And newly-released regulations of law firms that stiffen prohibitions against their members resorting to the internet, open letters, and public protests to discuss their cases offer little ground for optimism; indeed, they have just provoked 168 legal experts to deliver an extraordinary open letter of protest to the Ministry of Justice.

In other words, while China’s plan to broadcast its trials is worth applauding, the extent to which it will stimulate popular understanding and judicial professionalism is uncertain — and there is no guarantee that these developments will lead to public trust, or justice.

The country’s judiciary remains suspect among citizens, judges, and prosecutors experience growing dissatisfaction within their ranks, and criminal defendants and their lawyers continue to face almost impossible odds. One thing is clear. If the public cannot understand what it is seeing — and if no lawyers dare explain it to them — then everyday Chinese cannot assist Beijing in acting as checks on local court abuses and in raising judicial standards.

A real turn towards greater professionalism and justice will require a change in Party policy that will welcome lawyers’ critiques instead of suppressing them. There’s no “app” for that.

Susan Finder contributed to this article.