Dalai Lama: The Soldier of Peace 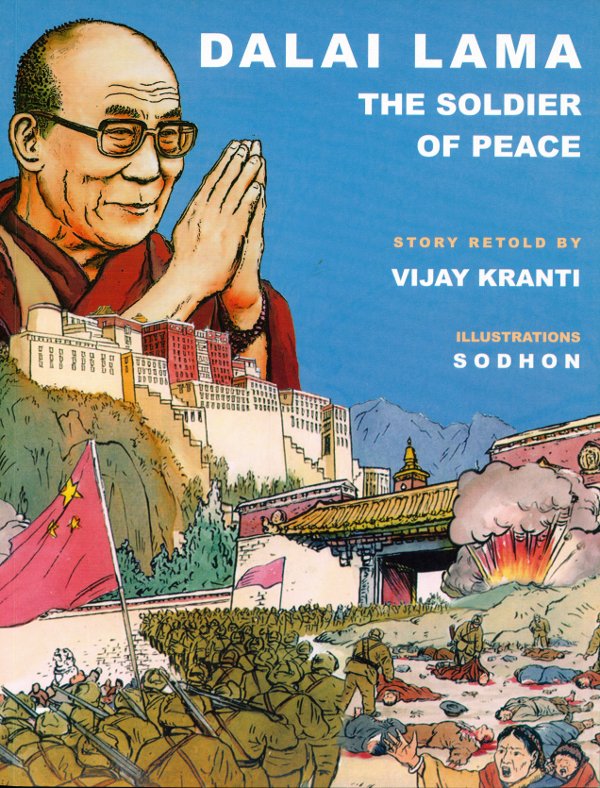 DHARAMSHALA: ‘Dalai Lama: The Soldier of Peace‘ is a comic book chronicling the life story of His Holiness the 14th Dalai Lama. The comic book, retold by noted Indian author and journalist, Mr Vijay Kranti, was released yesterday at a small inaugural function in Dharamsala. The comic book is suitable for readers from all age groups and is dedicated to the 1.2 million Tibetans who died under Chinese occupation and towards the hard work of Tibet support groups all over the world.

The comic book depicts how the Tibetan monks search out the reincarnation of the previous Dalai Lama, the intriguing relationship between Tibet and China; how Tibet was occupied; the thrilling escape of the Dalai Lama into exile and what makes the present Dalai Lama the most celebrated and charming personality in the present era of human history.

The author says that even though the life story of His Holiness has been told numerous times, retelling this story is crucial as it underlines the great contributions of His Holiness the Dalai Lama towards proving the power of peace and non-violence.

“The messages espoused by His Holiness the Dalai Lama has been embraced by hundreds of communities across the world who are struggling for justice” he said, adding that he hopes to instil in people the goodness of love and compassion through this comic book.

His Holiness the 14th Dalai Lama, is a Nobel laureate for world peace and a messenger of social harmony. He has inspired thousands of people around the world with his message of peace and non-violence. His story is a legacy that has been told and retold again and again all over the world. His message of peace, love and compassion is a global phenomena that is becoming all the more relevant in a world mired in serious humanitarian conflicts.