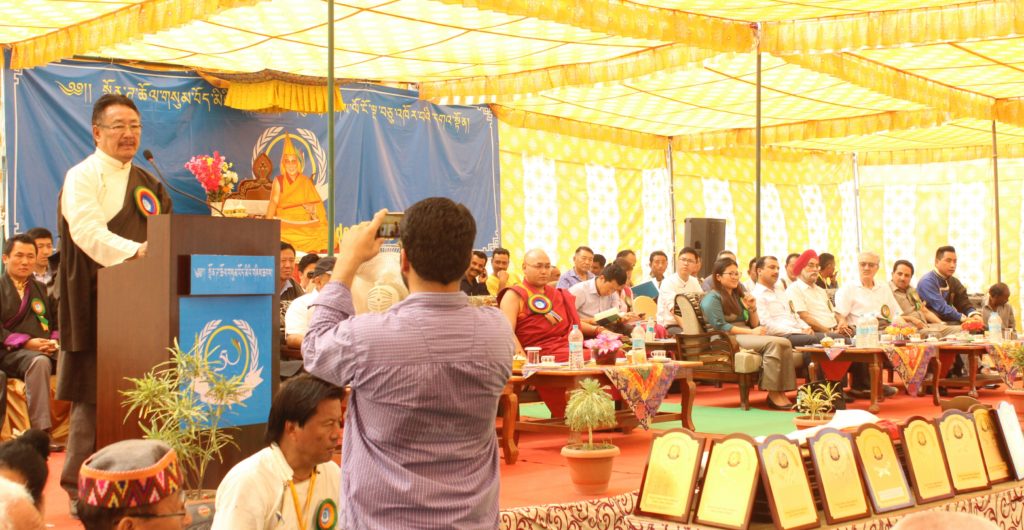 The program began with lighting of butter lamp by the Chief Guest and offering of khatak to the portrait of His Holiness the Dalai Lama. Followed by singing of Tibetan and Indian national anthem. Traditional Tibetan butter tea and sweet rice was served to all present.
Mr. Gelek Jamyang, Settlement Officer of Paonta Cholsum Tibetan settlement read out the brief introduction of the settlement.
Shri. Krinesh Jung, MLA extended his heartiest greetings on behalf of Hon’ble Chief Minister Shri. Virbhadra Singh and Himachal Government to all present on the 50th founding anniversary golden jubilee celebration of Paonta Cholsum Tibetan settlement. He even wished His Holiness the Dalai Lama long life and speedy resolution of the Tibetan issue.
He informed that Hon’ble CM close ties and friendship with His Holiness the Dalai Lama. Hon’ble CM has extended all possible help to the Tibetan refugees. He lauded the harmonious relationship between Tibetans and local Indians, He further urged to continue the cordial relation with locals.
Khenpo Sonam Tenphel reminded of our grave situation in Tibet and repressive policies of the Chinese authoritarian government after occupation of our country, under such circumstances we have lived and thrived in exile, it has been possible due to His Holiness the Dalai Lama’s grace and blessings; most importantly Government of India and respective state governments rehabilitation and welfare initiatives. During these fifty years we have preserved our religion, culture, language, and identity. On one hand fifty years is not a long time but in one’s life fifty years is half of human life span.
Speaker emphasised on our collective actions and efforts in resolving the issue of Tibet, most importantly not to lose hope. Also, during the visit with Home Kalon around the settlement and Sambhota school yesterday evening, He was impressed with the development of the settlement and the Sambhota school. He further urged to continue with the same progress.
Home Kalon briefly addressed in English, thanked the Government of India and particularly Himachal Government for the timely assistance and for making our stay comfortable. Also, thanked the dignitaries for making their precious time available for the auspicious occasion to celebrate the golden jubilee of the settlement.
Addressing in Tibetan, Kalon informed that the celebration of fifty years founding anniversary is the time to reflect upon the achievements and shortfalls. As Speaker mentioned on the developments undertaken in the settlement, Kalon too was satisfied and happy to visit the settlement once again.
He stressed on the importance of education and educating our future generaion, we can hope for a better future and regain our country back. He recalled that we have to return to Tibet and fulfill the aspirations of Tibetans inside Tibet; But if have to live in exile for another fifty years than we have to live on the same land and work towards making our settlements sustainable.
Kalon mentioned that he will have the oportunity to address the public separately on the initiatives and strategic policies of the Kashag tomorrow.
The next program was presentation of mementos to the dignitaries and former members of local Tibetan assembly and former Society Presidents. Followed by cultural performances and luncheon reception to all.
After lunch, Speaker and Kalon graced the Shoton Tibetan opera festival and watched the Mainpat opera performance.
– Report filed by Department of Home – 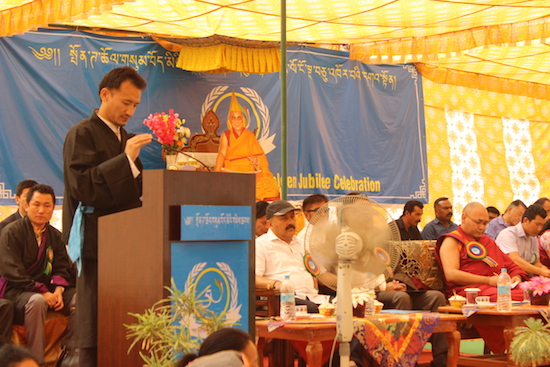 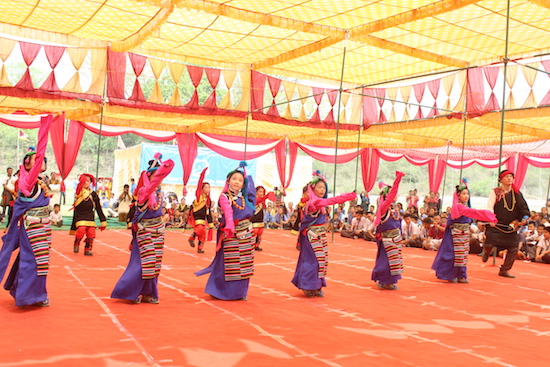