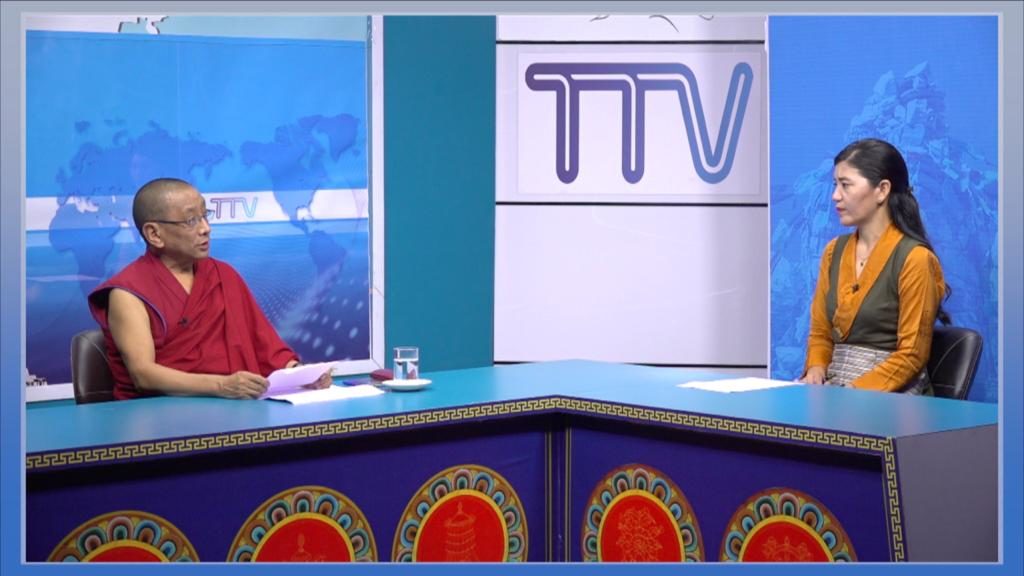 Dharamshala: On the occasion of the completion of the 4th and the penultimate year of the 15th Kashag, Kalon Ven Karma Gelek Yuthok, Department of Religion and Culture speaks with Tenzin Chemey, Tibet TV on the achievements of the Chorig department under the 15th Kashag and discusses key priorities in his final year in office.

Following is the English translation of the interview with the Kalon, originally conducted in Tibetan. Watch here.

Tibet TV: Could you walk us through the department’s initiatives and its significant accomplishments in the past 4 years?

Kalon: On the religious aspect, overseeing the welfare of the Tibetan monasteries in exile is our top priority. Since 1959, reconstruction and revival of 281 monasteries have been undertaken by the Chorig Department of which 15 was completed in the last 4 years. Among the 246 monasteries and 35 nunneries, Tibetans make up 32 percent, Himalayan region 65 percent and 3 percent of Mongol and others. The department’s key undertaking is to convene lifelong prayers for His Holiness the Dalai Lama, wherein the monasteries under the leadership of CTA and lay public participate. The year 2018 which according to the Tibetan astrology coincided with His Holiness’ obstacle year, extending into 2020, the Chorig department organised long-life prayer offering to His Holiness the Dalai Lama,  dedicated prayer ceremonies to deities as well as many religious heads led prayers, joined by monasteries and the public. Simultaneously, CTA organised the Tenshug Monlam thrice, beginning in 2017, in 2018, and in Dharamshala in 2019. As part of long-life prayer offering for His Holiness, the Chorig department funded the renovation and revival of 64 monasteries and operational expenses of 100 Monasteries.

The third important development is the 14th Tibetan religious conference which the Chorig department organised in November last year at CTA headquarters here in Dharamshala. The meeting was blessed by His Holiness the Dalai Lama and attended by the heads and important figures of various traditions of Tibetan Buddhism and native Tibetan Bon tradition, other eminent Tibetan rinpoches and tulkus, representatives and lamas from the Himalayan region, Khen Rinpoches of major Tibetan Buddhist institutes in exile, heads and members of Tibetan monastic institutes and representatives of Tibetan nunneries. Important agendas were discussed, primarily that of the reincarnation of His Holiness the Dalai Lama. We were also able to consecrate the new headquarters of CTA with blessings of the spiritual heads.

In accordance with the wishes of His Holiness the Dalai Lama, a programme has been established to introduce young educated Tibetans to Tibetan Buddhist philosophy. Buddhist centres across 39 settlements host young graduates with the expenses of the tuition and living costs borne by the Chorig department. With many Tibetans in higher education institutes across India, religious scholars are arranged to tour those institutes once or twice a year to teach about Tibetan Buddhist philosophy. In collaboration with Gyudmed Monastery in Hunsur, the Department has introduced a six-month intensive course on Buddhist philosophy and language for Tibetan college students. Every year, we are receiving active participation from students in the program.

Guided by His Holiness’ vision for better understanding and integration of modern science and ancient Buddhist tradition, science workshop is organised twice a year to ensure monks and nuns appreciate modern science, by the Chorig Department and the Library of Tibetan Works and Archives. According to His Holiness’ advice, the Chorig department is also overseeing the construction of Buddhist stupas at the sacred Buddhist sites which is currently in progress.

One of the most important achievement is the historic conferment of Geshema degree to Tibetan Buddhist nuns. The Conferment of Geshema degree to Tibetan Buddhist nuns was a longstanding aspiration of His Holiness the Dalai Lama and having successfully realised this vision reflects a historic milestone. In 2017, the awarding of Geshema degree in accordance with His Holiness’ sustained efforts for gender equality, facilitated by Chorig department, saw the first batch graduate. So far, 43 Geshemas have been awarded, including 33 in tantric studies. Similarly, equivalent degrees are awarded in the other religious traditions.

The 34th Kalachakra in 2017 was a historic success, CTA’s official request was granted and arrangements were then taken care of by the CTA. Although Tibetans in Tibet were restricted by the Chinese government at the time from taking the pilgrimage. It was still a rousing success with the teachings broadcasted for Tibetans around the world. CTA sponsored the elderly and destitute for the pilgrimage for those who lacked the financial means. Newly arrived Tibetans studying at Sherab Gatseling, monks and nuns in the retreat were facilitated by offices under CTA to undertake the pilgrimage. The Indian govt, state and district governments, Kashag, Gaden Phodrang office, CTA offices, Namgyal monastery, Geluk Monlam monastic organisation worked collectively to make it a success. CTA had formed subcommittees for preparations, led by Secretaries and Deputy Secretaries of the Departments who dedicated almost a month to plan it, and the efforts of the volunteers.

In terms of international collaboration with international Buddhist organisations and bodies, we have achieved a great deal. The Chorig department is a member of the Asian Buddhist Conference for Peace (ABCP) which is headquartered in Mongolia. In 2017, the member organisations met in New Delhi to discuss how to revive Buddhism, subsequently, the most elaborate was held in 2019 in Mongolia, attended by the heads of the religious traditions. As a Chorig Kalon, I have also been appointed as the President of the International Buddhist Confederation (IBC). They have held 2 conferences till now and ever since the coronavirus outbreak, the organisation has successfully convened virtual programmes for Choekhor and Buddha Poornima celebrations which was virtually joined by His Holiness the Dalai Lama, the Chorig Department and various religious heads of Tibetan sects. World Fellowship of Buddhists ( WFB) of which Tibetan representatives have been previous members, invited the Kalon during the 15th Kashag, as a special guest at the conference in the US.

As overseeing the welfare of the Tibetan monasteries in exile remains our top priority. In keeping with this, we have visited and inspected Tibetan monasteries in India from early on except when conditions are not possible such as in Nepal and Bhutan due to political circumstances. Otherwise, apart from 7-8 in Dharamshala the inspection of which have been disrupted by the pandemic, we have inspected all monasteries and nunneries and heard their concerns and similarly apprised to the relevant authorities.

Under the scholarship programme for monasteries and nunneries, we have covered 3600 scholars, which is facilitated by Gaden Phodrang to an extent. The department also provides tutor expenses for a total of 522 students for various subjects including Tibetan literature, Science and Chinese. The stipend programme covers 564 elderly monks and nuns aged over 60; renovation of 35 monasteries has been achieved; biannual religious organisations conference were held since 2017 with 100-200 attendees and the venues selected from participating monastic institutes. A specialisation programme was established in 2013, the first beginning in 2014, the second in 2015, completing in 2019, while this year it was disrupted by a pandemic. Initially, there were 10,15, 25 students respectively enrolled which has now increased to 22 graduates.

In light of the recent global outbreak and its toll on mental and emotional wellbeing, the Chorig department has taken special initiative to help alleviate the suffering through spiritual guidance on dealing with the pandemic and the mental stress. Initiated by the Gaden Phodrang, and under Kashag’s directives, Chorig department has issued timely announcements and organised prayer sessions for the benefit of the world at large and Tibetans in particular. The monasteries under the purview of the department have held prayer sessions dedicated to the deceased and sick regularly. Many people appreciated it, leading to a prominent interest in the Tibetan culture as well. The commitment of the monasteries and Tibetan public is commendable.

To this end, In 2017, the department announced the Tibetan Culture and Arts Fund(TACF) with the objective to revive Tibetan culture in exile. This programme provides grants to Tibetan artists and organisations involved in the preservation and promotion of traditional Tibetan culture and arts. Thus far, there have been 4 conducted, benefitting 55 individuals and organisations in total. The program is funded by USAID,

Tibet TV: What are the initiatives undertaken by Chorig department for the Tibetan community in Nepal?

Kalon: Across Nepal, India and Bhutan, 107 beneficiaries are covered under the scholarship fund for newly arrived Tibetans, stipend allowance for 22 beneficiaries in Nepal and tuition fees which covers 54 monasteries for 109 teachers and renovation of monasteries as requests submitted, with 3 in Nepal. The objective of the revival of Buddhism in border regions has supported 63 monasteries in Nepal, funded conference and modern science workshops, under the ‘introduction of Buddhist philosophy to youth’ programme, 3 centres have been established across settlements in Nepal, similarly, religious scholars tour to increase awareness of Buddhist philosophy is conducted.

There are also 2 graduates of Geshema from an important centre in Nepal. Notably, in the 1st Geshema awarding ceremony, the top-ranking scholar was from Nepal. Therefore in regards to Buddhist scholarship, the Department has made provisions for the Tibetan community in Nepal as in India.

Tibet TV: In the past 4 years, as you referenced the department has faced various obstacles during the Kalachakra arrangement and on top of that, the restrictions imposed by the Chinese government on Tibetan pilgrims inside Tibet among several others. Were there any other issues that the department had to face and how did you overcome it?

Kalon: In my view, there are more urgent internal challenges that we need to address. In terms of familiarising our youth with Buddhist philosophy, its objective in accordance with the aspirations of His Holiness the Dalai Lama is an area that still needs work and requires collaborative efforts. We need to reduce the gap between what we call religion and culture, and the general public. We try to bring the knowledge available in religion and culture to the general public through introductory courses and teachings on Buddhism and such. We believe these will help the public tremendously.

With the rise in educated youth, it is necessary to recognise our unique circumstances and dedicate wholeheartedly to the larger cause. Because of modernisation and the accompanying distraction, there is a decline in self-reliance to take forward the cause is which is concerning. Materialistic evaluation of everything needs to be introspected, instead, commitment towards the larger cause should be revived.

In the 60 years of exile, the revival of Tibetan religion and culture in exile has been one of the most successful amongst all refugee communities. The success is due to the leadership of His Holiness the Dalai Lama, and through the collective efforts of the Heads of all the religious traditions. As I have mentioned before, the external achievement in exile is formidable, even in comparison to those with respect to Tibet. So the most pertinent issue facing us is the dwindling numbers of monastics. This is concerning because we are looking at the preservation of our rich culture and religion. However, we are making every effort to inform the reality to the public and is exploring appropriate means and solutions to this problem. As many religious forums have forefronted the issue, we should face the fact and it is important for Tibetans to appreciate our cultural heritage which is precious and strive to develop it.