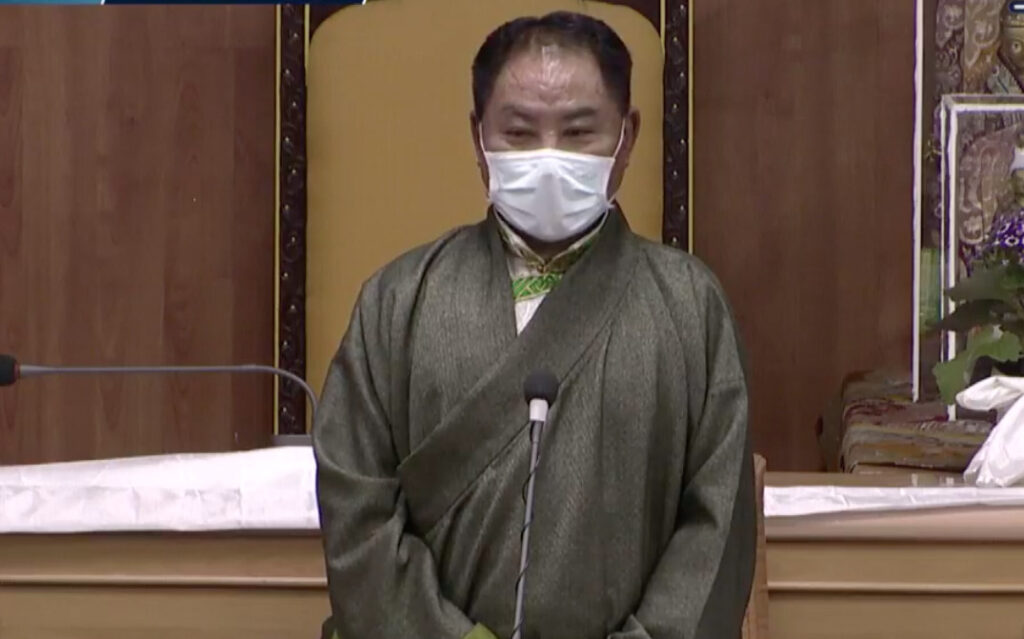 Speaker Pema Jungney presides over the first day of the 10th session of the 16th Tibetan Parliament in Exile. Screengrab image

In his inaugural address, Speaker Pema Jungney of Tibetan Parliament-in-Exile briefed the day’s agenda which included 16 resolutions of official mourning, discussion and approval of the budget followed by Kashag’s clarification and discussion, reviewing of the annual audit report, discussions on legislations followed by a question and answer session.

“The global Covid-19 pandemic has caused immense difficulties to everyone and disrupted regular activities,” Speaker said, “However, we are relieved to inform that none of the members joining the session has tested positive for Covid as this was one of our primary concerns.”

“In the light of the situation across India and cases continuing to mount in the neighbouring state of Punjab, it is difficult to say whether the parliament will complete the 15 days session. Hence, we will have to assess the situation. In case, the businesses are completed before the end of the scheduled number of days, we might decide to suspend the session accordingly.”

He added that the Sikyong and Parliamentary election proceedings have been smooth-sailing and that no untoward events have been reported.

He further urged the parliament members to follow the health advisory issued by Department of Health and urged them to notify the relevant officials immediately in case any Covid-related symptoms are detected. Speaker also appointed the Acting Speaker and Ad Hoc committee.

The 15-day session will conclude on 31 March.

The 10th session of the 16th Tibetan Parliament in Exile in progress. Screengrab image

Parliamentarian Khenpo Sonam Tenphel reads out the resolution of mourning for self-immolators and Tibetans suffering under the Chinese repression. Screengrab image

The parliamentary proceedings are broadcast live via Tibet TV.