ZHU WEIQUN: YOU ARE NOT WHO YOU SAY YOU ARE

What’s happening to our man in Beijing? Zhu Weiqun is on the warpath again. His ramblings on the Middle-Way Policy are getting even more frenzied by the day. Whenever he is in the mood, it seems he consults the oracle of the United Front, comes blue in the face and spits fire and brimstone on what is eminently a reasonable proposal. 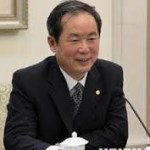 Zhu Weiqun, director of the Committee for Ethnic and Religious Affairs of the National Committee of the Chinese People’s Political Consultative Conference

The Middle-Way Policy was recently made into a very attractive media package by the Department of Information and International Relations of the Central Tibetan Administration. Zhu Weiqun’s reaction to this innovative presentation of the Tibetan proposal and the international media coverage it received is apoplectic.  The director of the Ethnic and Religious Affairs Committee of the Chinese People’s Consultative Conference deliberately distorts the Tibetan proposal to make it sound atrocious, ridiculous and downright dangerous to his domestic Chinese audience.

In his latest outburst, Zhu Weiqun says that the Tibetan proposal of the Memorandum on Genuine Autonomy for the Tibetan People was rejected by the Chinese authorities way back in November 2008. Why does he get so worked up about a proposal that has already been rejected?

While hashing and rehashing old documents like the Five-Point Peace Plan and the Strasbourg Proposal, Zhu Weiun makes this claim, “Fifth, it demands that the ‘Han Chinese emigrants in Tibet should return to China’ according to the Dalai Lama’s 1987 report to the US Congress. This would entail an expelling 75 million Han Chinese. Worse still, the expelled population would reach 250 million should the geographical ambition of the ‘Greater Tibet’ scheme be conducted.”

While making this statement, Zhu Weiqun is either deliberately or inadvertently leaking some deadly state secrets of China.  To send shivers in the back of every Chinese spine, Zhu Weiqun’s pet phrase to describe the Tibetan proposal to regulate the inflow of Chinese migration to Tibet is “ethnic cleansing.” If Zhu Weiqun’s figures about the number of Chinese living in Tibet are right, then this is downright ethnic swamping. As claimed by Zhu, are some 75 to 250 million Chinese settlers living in Tibet? Or is this some Chinese government plan in the future to settle this amount of Chinese on the Tibetan plateau? Will herding a little more than a quarter of China’s total population of 1.3 billion on the plateau be economically sustainable and environmentally feasible?

What makes Zhu Weiqun so worked up is this proposal. “The Memorandum proposes that the local government of the autonomous region should have the competency to regulate the residence, settlement and employment or economic activities of persons who wish to move to Tibetan areas from elsewhere. This is a common feature of autonomy and is certainly not without precedent in the PRC.”

There is no talking about “expulsion” of ethnic Chinese.  As for regulating population movement from one region to another Hong Kong is the best example.

Stoking fears serve to create ethnic hostility. Zhu Weiqun’s job is to establish inter-ethnic harmony, not to undermine it. But his remarks about “ethnic fusion” and “melting pot” touch a raw nerve amongst China’s minorities. To tell the minorities you are not who you say you are, we the central government will decide who you are is dangerous to the extreme. Instead of a melting pot, Zhu will get a boiling pot.