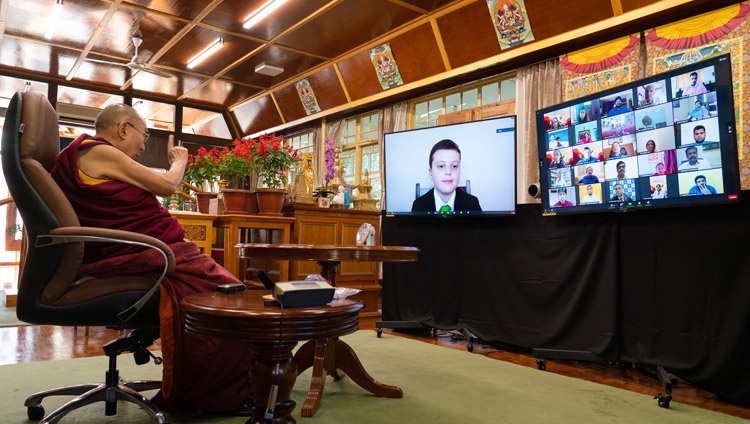 His Holiness the Dalai Lama answering a question from a student during his virtual interaction organized by the Dr APJ Abdul Kalam International Foundation from his residence in Dharamsala, HP, India on October 15, 2020. Photo by Ven Tenzin Jamphel/OHHDL

Dharamshala: This morning, His Holiness the Dalai Lama was invited by the Dr APJ Abdul Kalam International Foundation to give a short talk and answer questions from students around the world. He was welcomed by the grandnephews of Dr Abdul Kalam and co-founders of the foundation. They told His Holiness how honoured they felt that he had joined them by video link from his residence. They quoted Dr Abdul Kalam’s words as evidence of his dream of a more peaceful world: “Where there is righteousness in the heart, there is beauty in the character. When there is beauty in the character, there is harmony in the home. When there is harmony in the home, there is order in the nation. When there is order in the nation, there is peace in the world.”

“Respected friends,” His Holiness replied, “it’s also a great honour for me to have the opportunity to remember and talk about Dr Abdul Kalam. When I first came to India, in 1956, Rajendra Prasad was the President. He was succeeded by Dr Radhakrishnan. Over the years I’ve had the opportunity to meet many Presidents and Prime Ministers. Among them, there was something special about Dr Abdul Kalam. He came from an ordinary family, but through education and sheer hard work, he rose to become an eminent scientist. He was a gentle, genuine and dignified leader.

“Today, we have the opportunity to remember him and talk about India’s culture that is thousands of years old, especially the custom of maintaining inter-religious harmony. Dr Abdul Kalam was a Muslim who held the highest position in the country. And since all the world’s religions flourish here and live together in mutual respect, India is a living example that religious harmony is possible.

“The practices of kindness and altruism are related to human well-being. Since many of the problems we face are a direct result of a lack of compassion, the notions of ‘karuna’ and ‘ahimsa’ are clearly relevant today. This is why one of my commitments is to encouraging a revival of interest in ancient Indian knowledge, especially an understanding of consciousness and emotions that enables us to achieve peace of mind.

“I believe that although much of this knowledge is to be found in religious texts, it can be employed in a secular, academic way. Every human being looks forward to leading a peaceful life; compassion and non-violence are important to their being able to do so.” 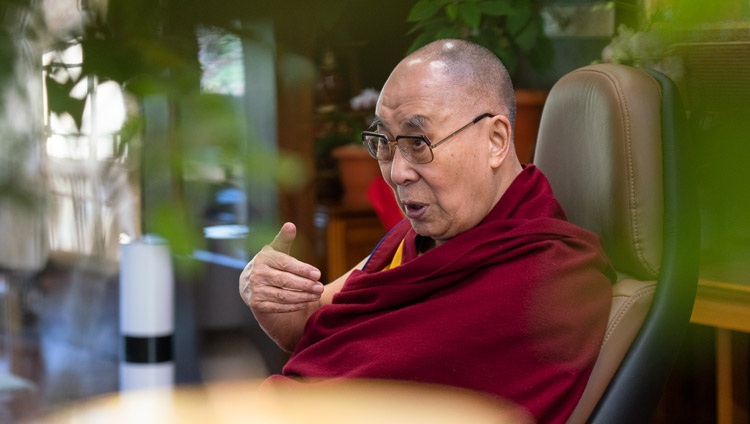 His Holiness the Dalai Lama answering a question from the virtual audience of students from his residence in Dharamsala, HP, India on October 15, 2020. Photo by Ven Tenzin Jamphel/OHHDL

Answering questions put to him by young students from different parts of the world, His Holiness confirmed that members of ordinary families can contribute to world peace. He cited the example of Mahatma Gandhi who, as a single individual, propagated a non-violent approach to change, first in South African and later as part of India’s freedom struggle. He had no military force behind him, but his powerful example was followed by Nelson Mandela and Martin Luther King.

“Ideas may start with a single individual, but they grow as they are taken up by humanity at large. Young people like you, with a rich cultural heritage, can make a definite contribution to peace in the world.”

With regard to preserving a peaceful planet, His Holiness explained that modern education tends to focus on materialistic goals, with insufficient attention paid to how to cultivate peace of mind. Contemporary emphasis on technological development leads to greed. His Holiness suggested that if our lives are only focussed on material goals and we resort to violence to defend them, it would be difficult to see how the result would be peace.

However, towards the end of the 20th century, many people, including scientists, began to take an interest in how to develop peace of mind. Some scientists began to observe that changes in the mind could affect the brain. Peace, His Holiness explained, is related not to our sensory consciousnesses, but to our mental consciousness.

“We human beings are social animals.” he added, “with a natural concern for the community in which we live. Without compassion and the care of others we can’t survive. From the moment of our birth our mother takes care of us, but there are also relatives and neighbours who take care of her. Compassion isn’t something we learn about when we grow up, we experience it as soon as we’re born.

“In today’s world, materialistic thinking creates a lot of problems. On top of them, there’s global warming and climate change, which is really urgent. Wasn’t it reported that this September was the hottest September on record? Ancient scriptures refer to the creation, abiding and destruction of the world and if we stop to think about it, it seems that the world is currently approaching destruction.

“If we do nothing about it, experts say the rivers and lakes we depend on for water will dry up. The time has come to pay serious attention to ecology and peace in the world. Continuing to manufacture weapons and engaging in warfare is self-destructive. Thinking of others in terms of ‘us’ and ‘them’ and resorting to the use of force is completely out of date. It’s ‘ahimsa’ and ‘karuna’, non-violence and compassion, on which we have to rely.

“Most of the problems that disturb us are of our own creation. This is why it is so essential that we learn to establish peace of mind. It’s evident that being in a state of constant anger and fear destroy any sense of inner peace, while cultivating compassion and concern for others reduces these destructive emotions. Better to be altruistic and think of your neighbours as brothers and sisters. This is why I try to promote a sense of the oneness of humanity.

“Differences of colour, religious faith and nationality do exist, but wherever I go I try to think of my fellow human beings as brothers and sisters. We are essentially the same in being human. Children don’t care about their playmates’ faith, nationality or whether they are rich or poor — they have a natural appreciation of the oneness of humanity. This is the kind of attitude we have to work to preserve in order that we can all live together on this small planet.

“Take for example the spirit of the European Union. After fighting and killing each other for centuries, following the Second World War, European nations established what became the EU and fighting among them ceased. We need similar unions in other parts of the world, a Latin American Union and an African Union. India and China are the world’s most populous countries, and how good it would be if they formed an Asian Union with Japan and other states like Burma, Thailand and Vietnam. 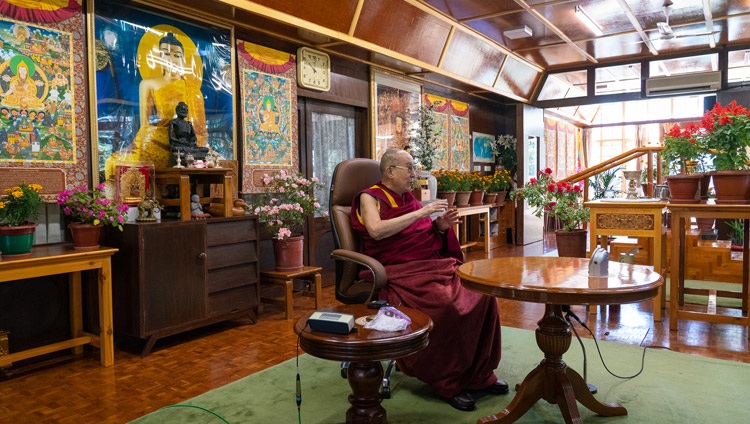 His Holiness the Dalai Lama speaking to a virtual audience at the invitation of the Dr APJ Abdul Kalam International Foundation from his residence in Dharamsala, HP, India on October 15, 2020. Photo by Ven Tenzin Jamphel/OHHDL

“If there were no more need for military force, what savings could be made. If we want to see a more peaceful world, we have to learn to collaborate. You young people shouldn’t follow previous patterns of behaviour. New conditions, like our interdependent, globalised world, require new ideas. As I’ve said before, dividing people into ‘us’ and ‘them’ is out of date.

“At the time of the Buddha, people lived in small, relatively isolated communities. They had no sense of internationalism. Now, we live in a global economy and technology has brought us all much closer together. India is a great nation, but she needs good relations with other nations. Reality is teaching us that we must all work together.

“Short-sighted self-interest and emotional impulses such as attachment, anger or fear are unhelpful. They are based on superficial appearances, which are a misapprehension, because appearances — as quantum physics shows us — don’t correspond with reality. Positive emotions like compassion, which can be cultivated on the basis of reason, also serve to reduce destructive emotions.”

Asked how to respond to the coronavirus pandemic, His Holiness observed that in India the number who have fallen ill is quite high, but so is the number of those who have recovered. He noted that researchers seem to be doing good work and making progress. He stressed that patients should not let themselves become demoralized, which can undermine their natural immunity. He said they need courage and an enthusiasm to live to serve others, recommending that they remain self-confident and think positively. 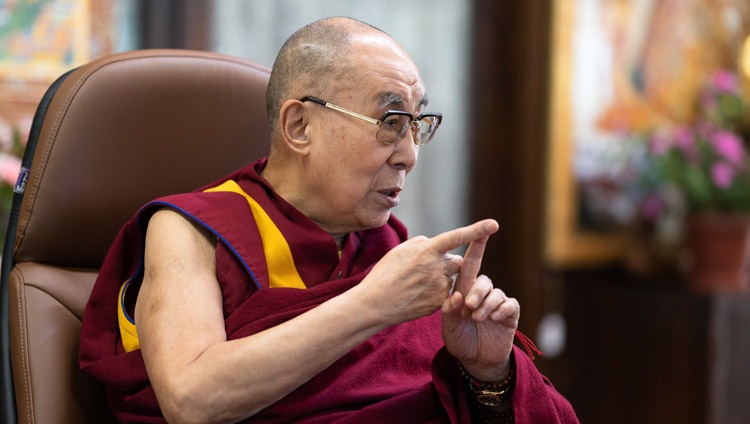 His Holiness the Dalai Lama answering a question from the virtual audience of students during his talk on Working Together for a Peaceful World from his residence in Dharamsala, HP, India on October 15, 2020. Photo by Tenzin Phuntsok/OHHDL

Responding to a question about the gap between rich and poor, His Holiness declared that poor people also have rights and wealthy individuals, as well as wealthy nations, should pay more attention to helping them. He observed that the very existence of the growing gap between rich and poor is morally wrong and that since we all have to live together, efforts must be made to repair it.

“Human intelligence has the power to look at the same object from different angles,” His Holiness told another questioner. “Doing this enables us to see things in a different light. We should not just repeat what was done in the past. When the situation has changed, the way we think about it should change too. As I’ve already said more than once, the division into ‘us’ and ‘them’ is out of date. We have to think about the whole world, the whole of nature. Instead of being narrow minded, we need a broader approach. You young people can make a significant contribution by adopting a more holistic view.

The organizers thanked His Holiness and other participants for their contribution to the discussion.

“The key thing is to have self-confidence,” His Holiness reiterated. “And a major factor in this is to remain honest and truthful, then your confidence will be soundly based. Self-confidence combined with negative emotions will just lead to disaster. Human beings tend to optimistic by nature. If you are truthful, honest and have self-confidence, you’ll be able to use your human intelligence well. What we usually say is that intelligence needs to be combined with warm-heartedness and backed by truth and honesty. Thank you — goodbye.”