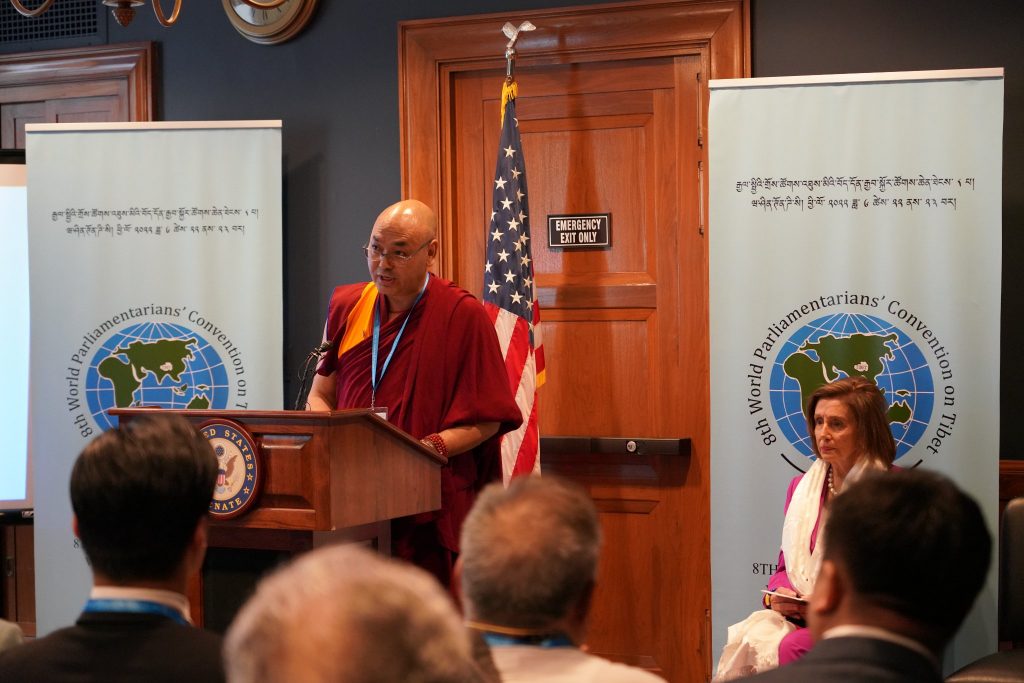 Dharamshala: Speaker Khenpo Sonam Tenphel of the 17th Tibetan Parliament in Exile delivered his inaugural speech at the 8th World Parliamentarians’ Convention on Tibet on 22 June 2022.

The Speaker said “It gives me immense pleasure to welcome all the distinguished parliamentarians from across the world to this convention. It is certainly an honour for me to address this esteemed gathering on behalf of the Tibetan Parliament-in-Exile. I would like to thank all of you for taking out time from your busy schedule to show your solidarity for the just cause of Tibet.

With the growing unethical and inhuman atrocities around the world in general and in Tibet by the leadership of the People’s Republic of China in particular, to have such a convention and bring all the like-minded decision-makers on one platform becomes pivotal. Till date, we have had seven World Parliamentarians’ Conventions on Tibet (WPCT) in various countries.

All the WPCTs had been possible with the co-host Parliamentary Tibet Support groups of those countries. The 3rd WPCT was held in Washington DC in 1997 with the strong support from Late Congressman Benjamin Gilman and his team including Honourable incumbent Speaker, Nancy Pelosi. Likewise, this convention is possible with the unflinching support from Honourable Speaker Nancy Pelosi, Honourable US Representative Jim McGovern and many other friends in the US Congress who are friends of His Holiness and Tibet. Without their support this convention could not have been possible within a very short period of time.

The situation inside Tibet still remains grim and painful despite the false lofty claims of being liberated and developed. Tibetans are denied of the most basic human rights, as also enshrined in the UN Universal Declaration of Human Rights. Any form of expression that is against the dictates of China’s Communists  Regime can have severe consequences of ending up in prison. While Chinese authorities are marketing Tibet as a tourist destination based on spiritual attraction of the Buddhist culture and landscape, Beijing has tightened its control over Tibetan religious expression and practice. The communist leadership who explicitly rejects even the idea of past and future lives are busy meddling in the system of reincarnation and especially the reincarnation of Dalai Lama. PRC not only want control of Tibet’s territory but they also dream to have control over the minds of Tibetans by capturing the institution of Dalai Lama for their political end, which we reject in the strongest word and we want the free world to follow suit. The space for the Tibetans to protect, preserve and practice Tibetan Buddhist culture and identity is shrinking severely. Since 2009, 157 known cases of Tibetans from every sectors of life have set themselves on fire in one of the biggest political protest in human history, yet instead of addressing to the causes of this desperation, PRC has strengthened the very wrong policies that caused it. In a nutshell, Tibetans in Tibet continue to face political repression, cultural and social exclusion, economic and educational marginalisation and massive environmental destruction.

In exile, democracy is the gift of His Holiness the Dalai Lama to the people of Tibet. We have a democratic and popularly elected leadership that is accountable to the Tibetan Parliament-in-Exile. The Central Tibetan Administration is governed by rules and regulations with transparency and accountability in governance. Despite having a thousand years of history of being an independent country, we are sincere and committed to the Middle Way Policy to resolve the conflict between Tibet and China through a mutually beneficial way. We urge the leadership of PRC to show historical responsibility and political wisdom to come to the table to resume the stalled talks with the representatives of His Holiness the Dalai Lama, if you are sincere in your call for stability of mainland China.

The Tibetan refugee community is thriving around the world with the kind humanitarian help from a number of Governments and the people of these countries, especially India who has been a host to His Holiness and Central Tibetan Administration for more than six decades. Likewise Tibet and Tibetans are indebted to the unwavering support by the Government and people of United States of America for supporting the just cause of Tibetans in many ways, such as passing of the Tibet Policy and Support Act 2020, Reciprocal Access to Tibet Act and appointment of the special coordinator for Tibet Uzra Zeya to name a few. These gestures truly support our belief in democratic values, boost the morale of our suffering Tibetans inside Tibet and our hope in our movement. Any success story of ours can become an inspiration for many of other nationals in the world who are making an attempt to accomplish their rightful cause. Thus, the sharing and learning from the experiences among striving nationals could be crucial in building up our cases stronger.

Through such a convention we hope more and more nations come forward in following the footsteps of the United States in passing such acts to make differences in the lives of the suffering humanity and not succumb to the dictates of authoritarian regimes like PRC. The outbreak of Wuhan Covid-19 pandemic has shown to world how fragile human existence is and how interdependent our existence is. The arrogance of Communist Chinese leadership’s saving their own image and not sharing early findings and data on the virus has led to the death of millions of people around the world. Even now while we are meeting here in Capitol hills, millions of Chinese people are facing the brunt of Xi’s wrong Zero Covid Policy. My heart goes out to all of them. The leadership of PRC should be held accountable for bringing such magnitude of miseries to the humanity.

My speech would not be complete if the Tibetan Parliament-in-Exile and I fail to show our solidarity with the people of Ukraine who are suffering under the invasion. Since Tibet has gone through it, we can relate with the appalling situation there. His Holiness the Dalai Lama endorses to engage in dialogue rather than war and bloodshed to solve the differences. We Tibetans firmly believe that no one can get happiness by giving pain and grief to others. We pray for this war to end at the earliest and may this world be a better place for all to live in peace and harmony.

I end my speech here with hopes that this convention would pave the way forward in injecting more zeal and commitment among the decision-makers to stand with Tibet. We urge you to be vocal on the pressing issues of Tibet in your respective countries and to make the return of His Holiness the Dalai Lama and his people possible as per the wishes of the martyrs who have laid their lives for Tibet.”