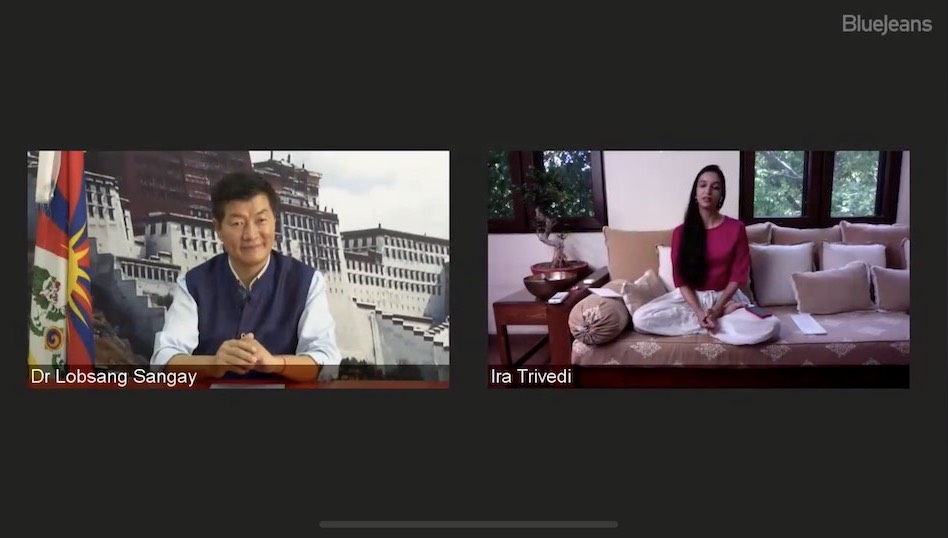 Dharamshala: Earlier on Friday in an exclusive interview with Ira Trivedi, a renowned columnist and yoga teacher, President Dr Lobasng Sangay of the Central Tibetan Administration talked about embracing faith and spirituality during the global crisis.

President Dr Sangay said that spirituality plays a vital role in combating the coronavirus that has become a global pandemic by uniting humanity as he emphasised that only through unity, the global crisis could be defeated.

He mentioned that his administration, as well as Tibetans around the world, have been doing a commendable job as far as humanitarian support is concerned.

“Tibetans all over the world especially the monastic communities all over India and Nepal have been actively contributing to daily wagers and those in poverty,” he said.

He also affirmed that Tibetans in exile have been one of the highest contributors to India’s fight against coronavirus mainly because no country has ever done more for Tibetans and Tibetan cause than India. As a way to express gratitude and solidarity, Tibetans are committed to doing their part in their best capacity to help India in fighting the crisis.

When asked how His Holiness views the pandemic and what is his spiritual guidance for the people, President Dr Lobsang Sangay immediately replied with ‘Karuna’. He asserted that His Holiness is an ardent believer and a strong advocate of human compassion. As someone who is inspired by the ancient Nalanda tradition and values, His Holiness always emphasises that basic human nature is compassion and that humans are inherently kind, loving, and compassionate. As such, His Holiness encourages action based Karuna over prayers.

President Sangay mentioned the recent article of His Holiness on a global pandemic for Times magazine and commented that coronavirus stands for action, action in helping poor, helping neighbourhood and action in putting out in the frontline.

He noted that Karuna is essential in defeating corona.

“Rather than dwelling on petty differences created by a narrow concept such as us and them, it is more crucial that we come together as one human community and realise that we are all interdependent on each other because coronavirus has no respect for social, racial, economic barriers of humans” he added. This he said is something everyone can learn from a spiritual point of view in addition to social and emotional points of view.

He also stated that the present situation should also be used as an important opportunity to conserve the environment, improve the health system.

Lastly, he informed that in a bid to strengthen the global fight against coronavirus, His Holiness would give two-day online teaching from 16 to 17 May for the global audience.