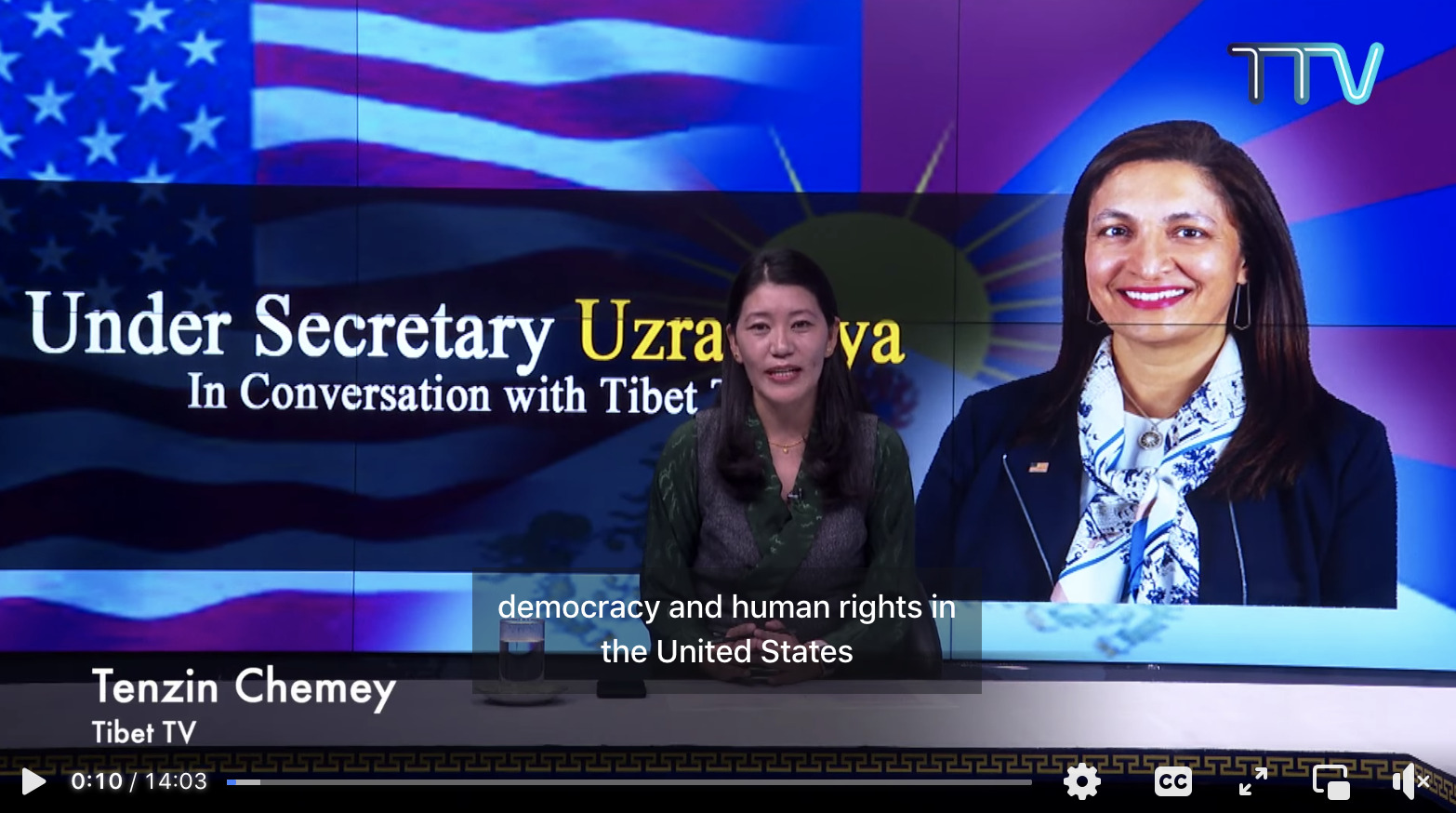 Dharamshala: US Special Coordinator for Tibetan Issues Uzra Zeya expressed the US administration’s strong commitment towards human rights, and called on the People”s Republic of China (PRC) to hold direct dialogue with His Holiness the Dalai Lama or his representatives without any preconditions to achieve meaningful autonomy for Tibetans. Special Coordinator Uzra Zeya made these comments while speaking to Tenzin Chemey in an interview with Tibet TV on 14 January.

Speaking about her role as the US Special Coordinator for Tibetan Issues, she said she sees the role as fully reflecting President Biden’s commitment to center human rights and democratic values in the US foreign Policy writ large. She expressed her own commitment to working with the international community and engaging the PRC officials on advancing human rights of the Tibetan people and preserving their unique historical, religious, cultural and linguistic rights, including calling upon the PRC to end interference in the selection and veneration of the Dalai Lama and Tibetan Buddhist religious leaders.

Further elaborating, she said her role also include calling upon the PRC to end its surveillance and harassment of Tibetan diaspora communities all over the world including in the US. She then called on the PRC to engage in direct dialogue without preconditions with His Holiness the Dalai Lama or his representatives to resolve differences and achieve meaningful autonomy for Tibetans.

“We are also calling for increased access to Tibet for US and other officials including journalists like yourself and we seek reciprocity from China regarding the access that PRC officials enjoy in our country. We want to promote activities that protect the environment and the water resources of the Tibetan plateau on which over a billion people depend. We also seek to address the very significant humanitarian needs of the Tibetan refugees. We want to support opportunities for these refugees to improve their livelihood and we must ensure that they are not forcibly returned to China. So it is a multi-pronged agenda that we are pursuing, one that we seek to intensively engage international partners to build support in this very concerted effort,” she added.

Emphasising her commitment to restore the Sino-Tibetan dialogue, she said she intends to work intensively with partners throughout the US government, the US congress, and with likeminded partners and governments in the international community. She described resuming the Sino-Tibetan dialogue as the cornerstone of the special coordinator’s role and something that she will continue to call for. She explained that the US administration believes that a negotiated agreement that leads to meaningful autonomy for Tibetans and ensures the preservation of their religion, culture and language provides the best hope for long term stability in the region.

She noted the concerning phenomena of authoritarian governments including the PRC effectively exporting their repression and using coercion, technology, diplomacy to pressure diaspora actors particularly those advocating for human rights. So, she clarified that the transnational repression aspect is an important part of her mandate in supporting Tibetan diaspora communities across the world.

Responding to questions on the US government’s stance on the upcoming Beijing Winter Olympics and the issue of reciprocal access, she said: “With respect to the Olympics, I want to underscore that the US took a principled decision not to send any diplomatic or official representation to the Beijing Winter Olympics and Paralympics games given the ongoing genocide and crimes against humanity in Xinjiang and their other severe human rights abuses including in Tibet.”

“So, this question of access is critical and our decision with respect to the Olympics is also to show that we would not treat these games as business as usual, and we would not be contributing to the fanfare of the games in such a way that obscures the reality of human rights abuses occurring as we speak in PRC. So on the question of access, this is an absolute priority and we have a legislative mandate that we intend to uphold and I think there is an opportunity in our stance with respect to the Olympics to show our commitment to promoting human rights and to shine a light on the reality of the situation in Tibet and elsewhere,” she added.

She further expressed that she is heartened by the strong bipartisan support for President Biden and Secretary Blinken’s decision to name her as the Special US Coordinator, and also for the issue of Tibet in the US Congress. 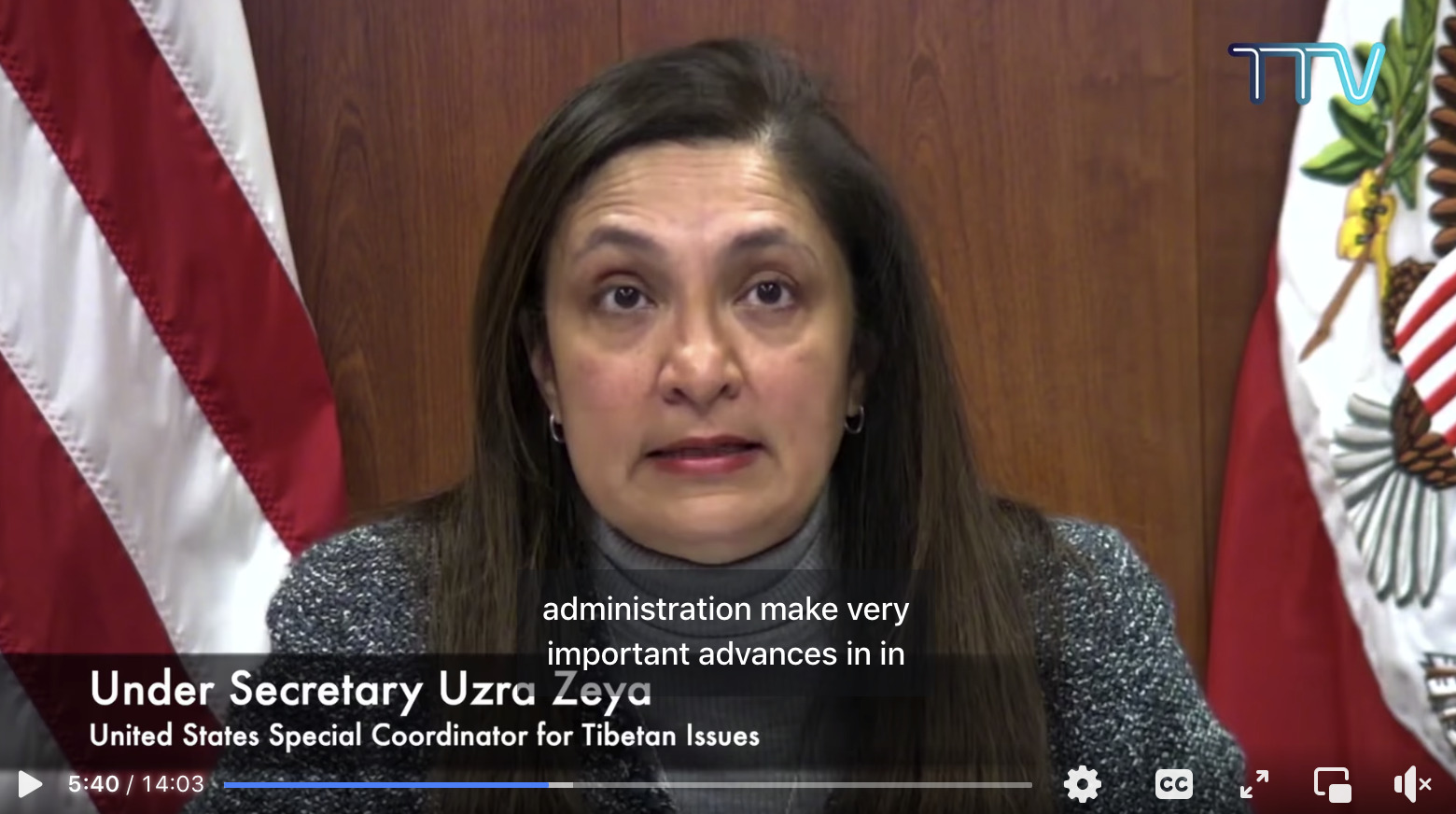 US Special Coordinator for Tibetan Issues Under Secretary Uzra Zeya.