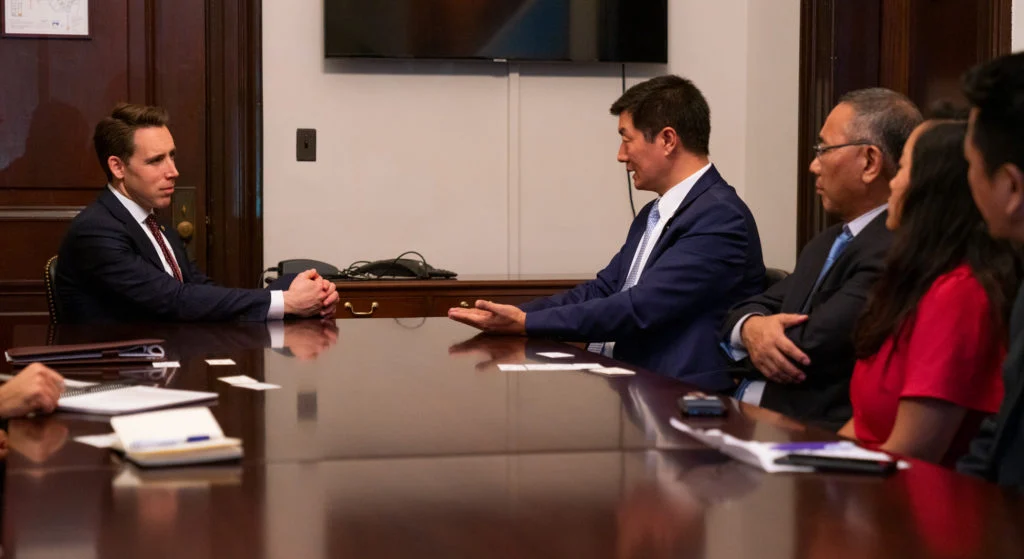 Sikyong Dr Lobsang Sangay during a meeting with Senator Josh Hawley in November 2019.

Washington DC: Senator Josh Hawley, a Republican Senator for Missouri, introduced a Senate resolution, “Condemning the Chinese Communist Party’s use of forced labor and other coercive measures to destroy religious freedom in Tibet.”

The resolution condemns CCP interference of Tibetan Buddhism, particularly in the case of His Holiness the Dalai Lama’s reincarnation. It also condemns CCP imposed forced labor and calls on US companies to divest from companies that are involved in Tibetan forced labour programs.

The resolution also calls on the US government to proactively support the Tibetan Policy and Support Act of 2002, and it urges all nations to stand against the “Party’s hegemonic agenda.”

Original co-sponsors of the resolution include: Senator Tillis, Cruz,  T. Scott, Blackburn,  Braun,  Young, Loeffler, Cassidy,  McSally, and Lankford. More senators are expected to co-sponsor the resolution in the next few weeks.

Sikyong Dr. Lobsang Sangay had met Senator Hawley during his visit to DC in November of 2019.

Senator Hawley is an active opponent of CCP interference; he has passed legislation condemning Beijing’s aggressive takeover of Hong Kong and has recently introduced the Taiwan Defense Act.