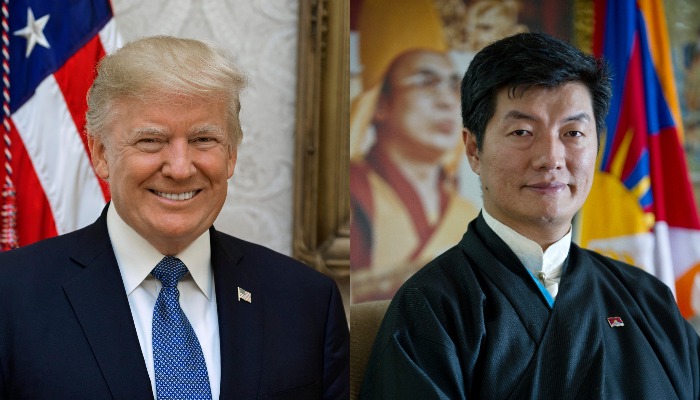 Dharamshala: US President Donald Trump has signed the Tibetan Policy and Support Act of 2020 into law, a move that dramatically strengthened US policy on Tibet and reaffirmed the US government’s steadfast support for His Holiness the Dalai Lama and the CTA.

The signing came after days of delay — the US Congress had approved of the omnibus spending bill, which had the TPSA attached, last week. By calling for larger stimulus checks in the COVID relief bill, Trump initially proclaimed he would not sign the omnibus spending bill until larger checks were made available for Americans. However, to avoid a government shutdown, Trump signed the spending bill.

Welcoming the historic legislation on Sunday, CTA President Dr Lobsang Sangay said, “This legislation sends a powerful message of hope and justice to the Tibetans inside Tibet and bolsters US support for the protection of Tibetan people’s religious freedom, human rights, environmental rights and exile Tibetan democracy like never before.”

“On behalf of the CTA and six million Tibetans, I extend deepest gratitude to President Trump for signing the profoundly historic bill. I would also like thank once again the US Congress for passing the bill, especially House Speaker Nancy Pelosi for her steadfast support in making this historic bill come true. I also thank the bill sponsors Senators Marco Rubio and Ben Cardin; and Congressmen Jim McGovern and Chris Smith for introducing in the House and Senate. Thanks to everyone who contributed to making this a reality.”

“As we proudly celebrate this momentous milestone, I express my deepest gratitude to His Holiness the Dalai Lama for his blessings, the elders for paving the way and the Tibetans inside Tibet for their sacrifice and determination,” Sikyong Dr Lobsang Sangay said.

Built on the historic Tibet Policy Act of 2002, the TPSA makes it official United States policy that decisions regarding the reincarnation of the Dalai Lama are exclusively within the authority of the current Dalai Lama, Tibetan Buddhist leaders and the Tibetan people. Any interference by Chinese government officials will be met with serious sanctions and be deemed inadmissible into the United States.

The Statement of Policy regarding the reincarnation of the Dalai Lama states: “It is the policy of the United States to take all appropriate measures to hold accountable senior officials of the Government of the People’s Republic of China or the Chinese Communist Party who directly interfere with the identification and installation of the future 15th Dalai Lama of Tibetan Buddhism, successor to the 14th Dalai Lama”.

The newly enacted bill sends out a clear message of deterrence to the Chinese government that has and continues to meddle with the spiritual traditions and practices of Tibetan Buddhism. The Government of the People’s Republic of China has interfered in the process of recognizing a successor or reincarnation of Tibetan Buddhist leaders, including in 1995 by arbitrarily detaining Gedhun Choekyi Nyima, a 6-year old boy who was identified as the 11th Panchen Lama, and purporting to install its own candidate as the Panchen Lama.

The bill categorically states that interference of the People’s Republic of China in decisions regarding His Holiness the Dalai Lama’s reincarnation would amount to violation of the fundamental religious freedoms of Tibetan Buddhists and the Tibetan people.

It explicitly mentions imposing sanctions pursuant to the Global Magnitsky Human Rights Accountability Act and prohibiting admission to the United States under section 212(a)(2)(G) of the Immigration and 20 Nationality Act. The State Department will also have to work at the international level to build support for Tibetan Buddhists’ freedom to choose their own leaders without government interference.

His Holiness the Dalai Lama’s contribution to Tibetan democracy

The Statement of Policy on Democracy in the exile Tibetan community, states: “The 14th Dalai Lama advocates the Middle Way Approach, which seeks genuine autonomy for the 6,000,000 Tibetans in Tibet” and that “The 14th Dalai Lama has overseen a process of democratization within the Tibetan polity and devolved his political responsibilities to the elected representatives of the Tibetan people in exile in 2011”.

“The Dalai Lama should be commended for his decision to devolve political authority to elected leaders in accordance with democratic principles,” the policy states. It further commends the Tibetan exile communities around the world for the adoption of a system of self-governance with democratic institutions to choose their leaders”.

Another significant aspect of the TPSA is the formal acknowledgement of the Central Tibetan Administration as the legitimate institution reflecting the aspirations of the Tibetan diaspora around the world and the Sikyong as the President of the CTA.

As a matter of policy, the bill also formally acknowledges the Middle Way Approach, advocated by His Holiness the 14th Dalai Lama, that seeks genuine autonomy for the six million Tibetans in Tibet. It reiterates His Holiness statement that “the Central Tibetan Administration will cease to exist once a negotiated settlement has been achieved that allows Tibetans to freely enjoy their culture, religion and language in Tibet.”

The bill introduces new key provisions aimed at protecting the environment and water resources on the Tibetan plateau. It recognizes the key role of Tibetan plateau, often called as the third pole, in determining global climate change. The Tibetan Plateau contains glaciers, rivers, grasslands, and other geographical and ecological features that are crucial for supporting vegetation growth and biodiversity, regulating water flow and supply for an estimated 1.8 billion people. Environmental changes threaten the glaciers in Tibet that feed the major rivers of South and East Asia, which supply freshwater to an estimated 1.8 billion people.

But the so-called developmental activities by the Chinese government including the continuous damming of the Tibetan rivers for the Chinese hydroelectric power, the continuous diversion of rivers and the coerced resettlement of Tibetan nomads who often play the role of environmental stewardship have led to environmental degradation of the Tibetan plateau.

The legislation, therefore, calls for greater international efforts to monitor the environment on the Tibetan plateau and also calls for participation of Tibetan nomads and other Tibetan stakeholders in preservation of the Tibetan plateau. Most importantly the bill calls for cooperative agreements among all riparian nations for transparency related to any kind of activities on rivers flowing from Tibetan plateau.

The bill strengthens diplomatic efforts through the Office of the Special Coordinator for Tibetan Issues in the State Department to “promote substantive dialogue without preconditions, between the Government of the People’s Republic of China and the Dalai Lama, his or her representatives, or democratically elected leaders of the Tibetan community, or explore activities to improve prospects for dialogue, that leads to a negotiated agreement on Tibet”.

It mandates the Office to coordinate with other governments in multilateral efforts towards the goal of a negotiated agreement on Tibet; encourage the Government of the PRC to address the aspirations of the Tibetan people with regard to their distinct historical, cultural, religious, and linguistic identity; promote the human rights of the Tibetan 14 people; promote activities to preserve the environment and water resources of the Tibetan plateau; encourage that any initiatives or activities for Tibetan communities in the Tibet Autonomous Region are conducted in accordance with the principles espoused in section 616(d), and promote access to Tibet in accordance with the Reciprocal Access to Tibet Act of 2018″.

American citizens and companies engaged in business activities in Tibet are encouraged to practice corporate social responsibility and to adhere to the UN Guiding Principles on Business and Human Rights.

Strengthening of funding for Tibetans inside and outside Tibet

The bill also recognizes the efforts of exiled Tibetan communities settled in South Asia for the preservation of culture, religion and language and directs for developmental assistance for the sustainability of these settlements.