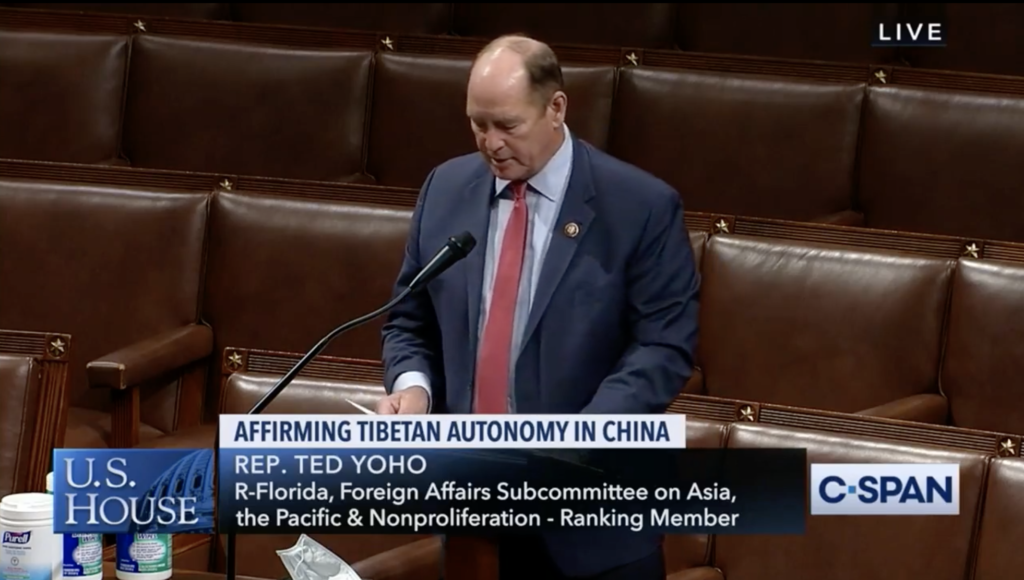 “The CCP sees Tibet culture and religion heritage as a threat to its control. The resolution recognizes genuine autonomy of Tibet and the vital work of the Dalai Lama” Rep. Ted Yoho, R-Fla., sponsor of the H. Res. 697 on the house floor.

Washington DC: This week the US House of Representatives passed a resolution titled “H. Res. 697: – Affirming the significance of’ the advocacy for genuine autonomy for Tibetans in the People’s Republic of China and the work His Holiness the 14th Dalai Lama has done to promote global peace, harmony, and understanding.”

The Resolution, headed by Congressman Ted Yoho, states that the House of Representatives:

(1) recognizes the cultural and religious significance of a genuinely autonomous Tibet and the deep bond between the American and Tibetan people;

(2) commends the 14th Dalai Lama for his commitment to global peace and nonviolence; and

(3) determines that it would be beneficial to convene a bipartisan, bicameral forum, either through a Joint Meeting of Congress, a teleconference broadcast in the Auditorium at the Capitol Visitor Center, or roundtable, between Members of Congress and His Holiness the Dalai Lama to discuss peaceful solutions to international conflicts.

Sikyong Dr Lobsang Sangay has thanked Rep. Ted Yoho, a longtime Tibet supporting Republican Congressman for sponsoring the crucial resolution that recognizes the cultural and religious significance of an autonomous Tibet and seeks peaceful solutions to the Tibet issue.

“I along with the Rep Ngodup was the first to meet Congressman Ted Yoho. In our second meeting, Congressman Yoho expressed that he wanted to invite His Holiness the Dalai Lama to address the Congress. He also proposed to pass a bill to that effect and we agreed. Hence the bill. Taking this opportunity, I would like to thank Congressman Ted Yoho for his leadership in passing this crucial bill as well as Congressmen Michael McCaul,  Jim McGovern, and Chris Smith for their endorsements,” said Sikyong. 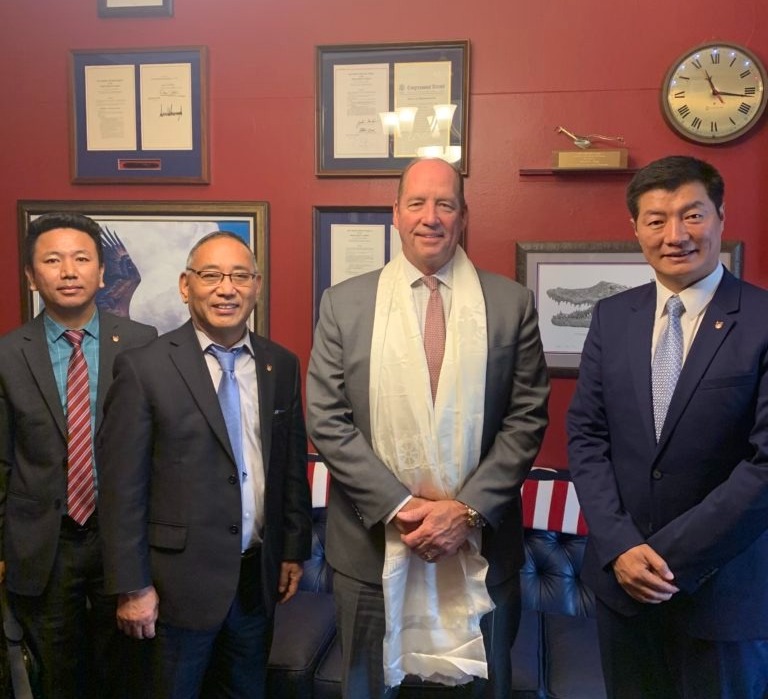 Speaking on the floor of the House during the vote on 18 Nov, Rep. Ted Yoho strongly criticized the Chinese government for violating Tibetans’ religious freedom.

“The CCP sees Tibet culture and religion heritage as a threat to its control. Just as they’ve done with Islam and Christianity, the [Chinese Communist Party] is trying to stamp out Tibetan Buddhism and the Tibetan way of life, even though Tibet is guaranteed autonomy under China’s constitution,” Rep. Yoho said. “Despite these challenges, the Dalai Lama has stood as a leader in the promotion of human rights and of religious harmony and the preservation of Tibetan culture and religion.”

Congressman Ted Yoho said the resolution recognises the genuine autonomy of Tibet and the vital work of His Holiness the Dalai Lama to promote peace around the world.

“The Dalai Lama’s contribution to peace and nonviolence has been revered by the international community and for decades by the US Congress. Congress has remained committed to strengthening the relationship between the US and the Tibetan people.”

Rep. Eliot Engel, D-NY, Chairman of the House Foreign Affairs Committee, accused China of violation of international religious freedom in Tibet. He said, the State Department has found that the Chinese government has systematically impeded travel to Tibetan autonomous region areas for US diplomats, officials, journalists and tourists.

Rep. Engel said the Resolution is a “strong measure that encourages the continuation of close engagement between the United States and Tibet,” and which “affirms and supports the Dalai Lama’s teachings and commitments to global peace, nonviolence, human rights and environmental protection”.

Rep. Scott Perry, R-Pa., said Chinese President Xi Jinping “will fail spectacularly in his effort to quash the hopes of millions of Tibetans.”

“One of the reasons he will fail is because the United States is with the people of Tibet”, he said. “Our Tibetan friends have long since recognized the significance of the genuine autonomy of Tibet, and today I’m proud to join them.”

Re-elected House Speaker Nancy Pelosi tweeted her support for H. Res. 697 and the continued support from Congress of freedom of religion and culture in Tibet.

The Resolution details His Holiness the Dalai Lama’s promotion of human values, promotion of religious harmony, and preservation of Tibetan culture and religion and quotes him stating, “I remain convinced that most human conflicts can be solved through genuine dialogue conducted with the spirit of openness and reconciliation.” The Resolution goes on to mention His Holiness’s Nobel Peace Prize and the Middle Way Approach. 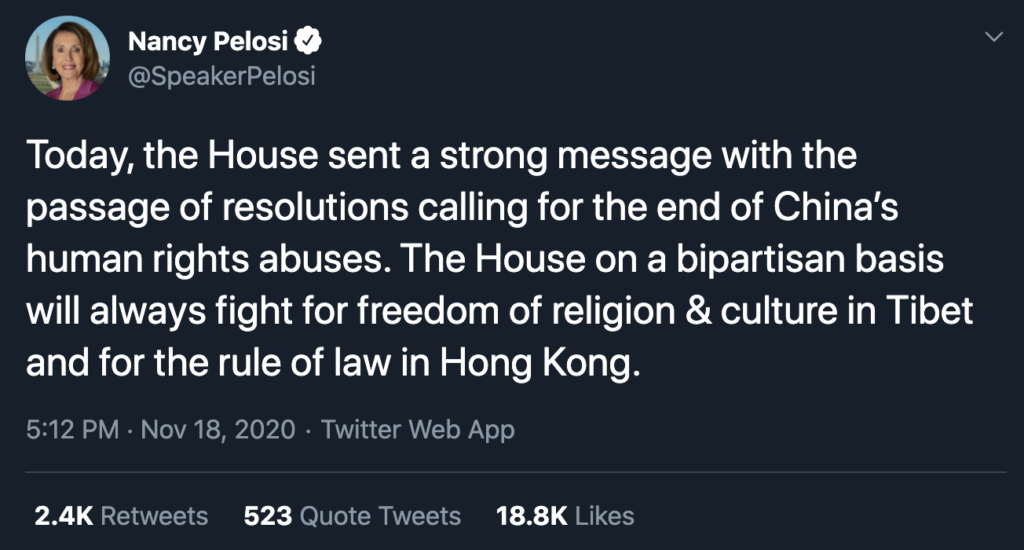