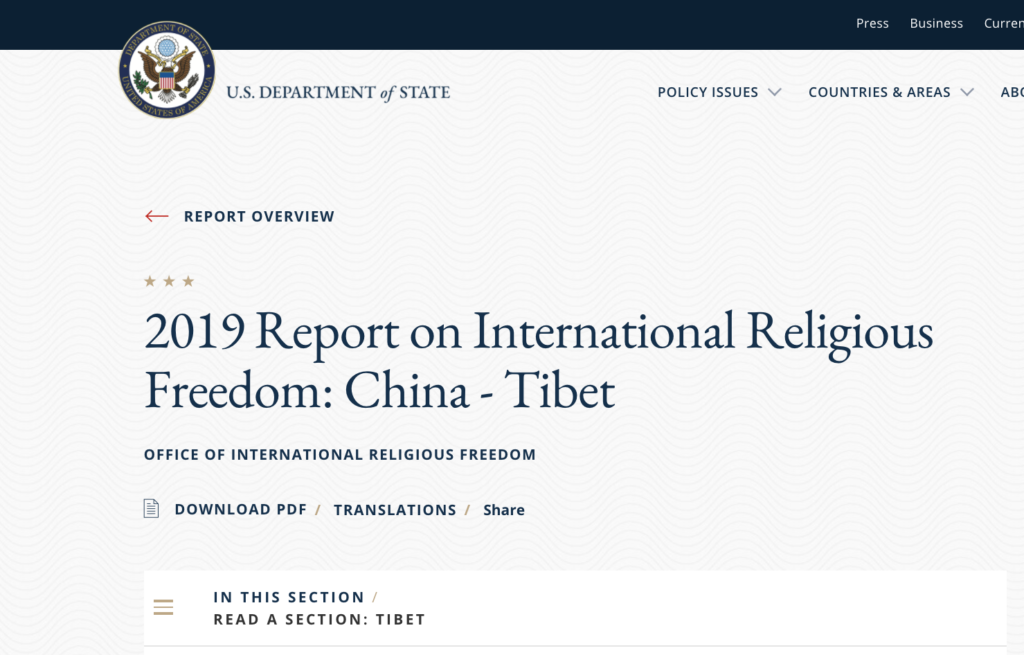 US: China is one of the worst offenders of religious freedom in the world.

Dharamshala: The U.S. State Department released its annual report to Congress on International Religious Freedom which tracks the status of religious freedom in every country. The report assesses the various world governments’ policies violating religious belief and practices of groups, religious denominations and individuals, and U.S. policies to promote religious freedom around the world.

The release of the State Department’s 2019 report on International Religious Freedom on 10 June comes as the world watches massive protests against China for causing pandemic throughout the world.

The comprehensive report marked China amongst the worst offenders of religious freedom. The report states that China permits “freedom of religious belief but limits protections for religious practice.” The section on China was the largest in the annual report with 87 pages.

The report mentioned China’s continued attempt in justifying the repression on religious practices of Muslims in Xinjiang because of what it called the “three evils” of “ethnic separatism, religious extremism, and violent terrorism.”

The Secretary of State Mike Pompeo reported positive developments in some countries in terms of actions being taken to hold violators of religious freedom accountable. But he said the state-sponsored repression of all religions is intensifying in China.

“The Chinese Communist is now ordering a religious organization to obey CCP leadership and infuse communist dogma into their teachings and practices of their faith,” said Mike Pompeo during a press briefing. “The mass detention of Uighurs in Xinjiang continues, so does the repression of Tibetans and Buddhists and Falun Gong and Christians.”

“China continues its decades-long war on faith,” the Secretary of State told reporters.

The Tibet section in the report noted that in Tibet Autonomous Region and other Tibetan areas there were reports of forced disappearances, arrests, torture, physical abuse, including sexual abuse, and prolonged detentions without trials of individuals due to their religious practices.

The report further notes that despite President Xi’s proclaim of CCP members as “Marxist atheists” the government continued its attempt in controlling the selection of Tibetan Buddhist lamas and supervised their religious education.

The 2019 report noted China’s continued restriction on the size of Buddhist monasteries and religious institutions. It mentioned about ongoing demolition of Larung Gar and Yachen Gar, the two largest Buddhist centres in Tibet where Tibetan monks and nuns are barred from doing religious study and evicted from the centre and forced to undergo political indoctrination in detention centres.

The report mentioned that worshipping in a space without the government’s approval through formal registration is deemed an illegal religious activity and may be criminally punished. Societal discrimination was also discussed in the report as Tibetans continued to face institutional discrimination when seeking government jobs in Tibet.

The recent self-immolation on 26 November 2019 by a 24-year old former monk named Yonten from Kirti Monastery was also highlighted in the report. Self-immolation is deemed as homicide, and family members, teachers, and religious leaders are charged as accessories to homicide if their dear and near ones self-immolate. They are criminalized by mere association.

The report mentioned the concerns raised by US officials about religious freedom in Tibet with the Chinese government at multiple levels. The Ambassador to China pressed TAR officials on the government’s refusal to engage in dialogue with His Holiness the Dalai Lama; the Consul General in Chengdu raised concerns about the ongoing demolition campaign at Larung Gar and Yachen Gar Tibetan Buddhist Institutes.

The report cited the U.S. continued attempt in underscoring the statement that only His Holiness the Dalai Lama will decide his succession and also raised concerns about the continued enforced disappearance of the 11th Panchen Lama who turns 31 this year.

“The US State Department’s new report on Religious Freedom with particular concern over China depicts the current egregious situation in Tibet. The more China becomes powerful in terms of economy the more repression it brings in,” said Human Rights Desk staff Tenzin Dhadon, DIIR, CTA. She further added, “it is time the world realizes the repression being unleashed by China on Tibetans and other peoples under its regime. By conducting trade with China without emphasizing the importance of human rights accountability, the world a merely fuelling the authoritarian regime and giving it tools to continue the persecution of people of faith.”
-Filed by UN, EU & Human Rights Desk, DIIR