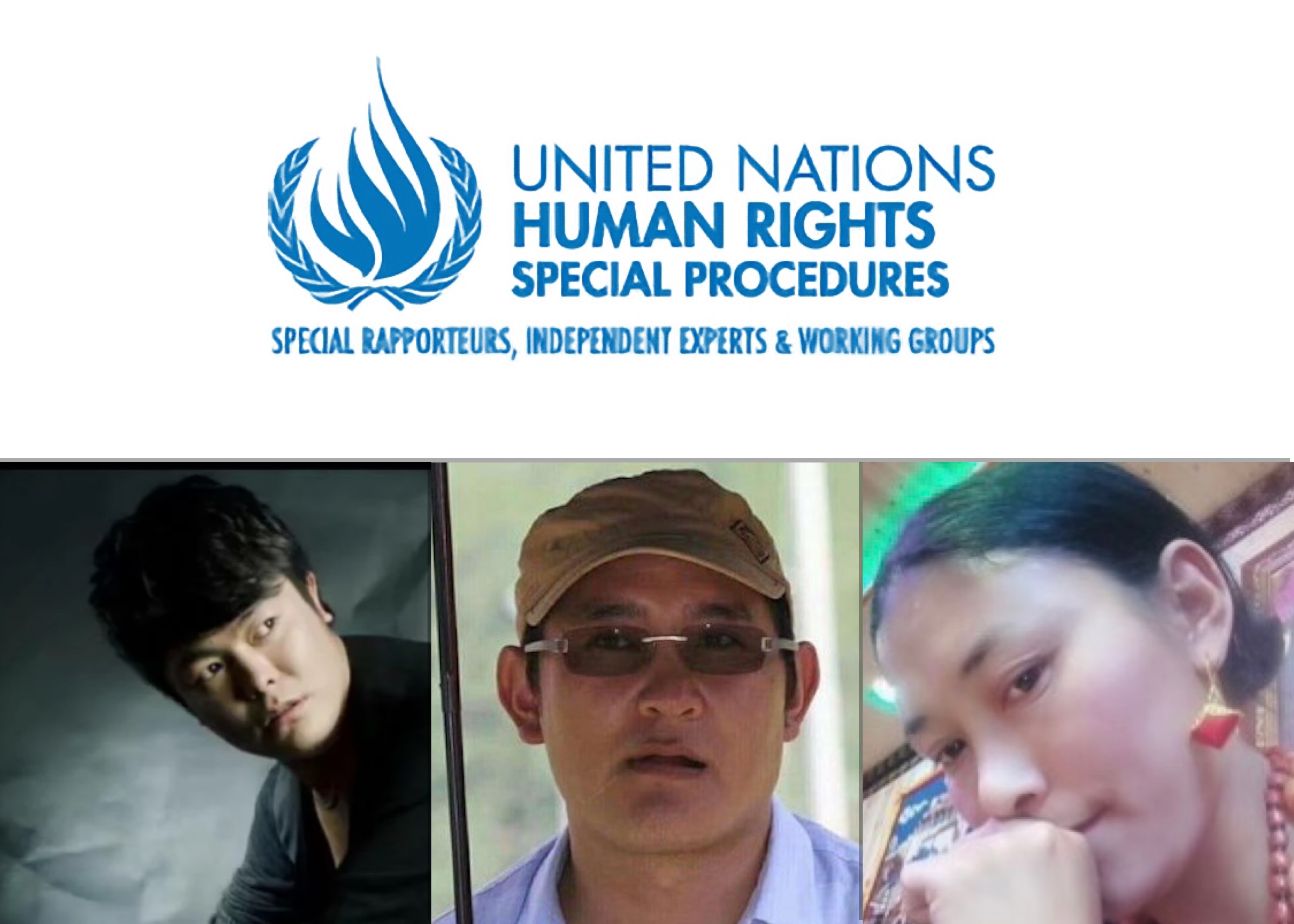 Geneva: A group of six UN experts have expressed concerns and brought China into account for arrest, detention and enforced disappearance of Tibetan writer Lobsang Lhundup known by his pen name Dhi Lhaden, musician Lhundrup Drakpa and teacher Rinchen Kyi, in the joint communication to China sent in February, but was just made public.

The UN rights experts have detailed three specific cases of gross violations of rights by China in Tibet, and further expressed “serious concern” over the repressive actions by China against the large numbers of Tibetans for their rightful engagement in promotion of the Tibetan culture, including through education, and China’s acts against Tibetans who are critical of the Chinese rule in Tibet.

In the sharply worded joint communication, the UN experts brought the attention and asked China to disclose the fate, health status and whereabouts of Tibetan writer Lobsang Lhundup, musician Lhundrup Drakpa and teacher Rinchen Kyi. While underlining the legal grounds for “arrest, detention and conviction” of Lobsang Lhundup and Lhundup Drakpa, the experts questioned China about the compatibility of “these measures” with international human rights norms and standards. With specific reference to the case of Tibetan teacher Rinchen Kyi, the experts questioned China to provide explanation on legal grounds for arrest and detention of Rinchen Kyi, and how charges “inciting separatism” against her are “interpreted” and “compatible” with international human rights norms and practices.

Tibetan writer Lobsang Lhundup, known by his pen name Dhi Lhaden, was arrested in June 2019 while he was working at a private cultural education center in Chengdu, Sichuan province. For the first 18 months, he was held in detention without trial, barred him from having any visit by family. In 2021, the Chinese court imprisoned Lobsang Lhundup to a four-year term on alleged charge of “disturbing social order” in a closed-door trial, without the presence of his family. The UN experts have transmitted China that the arrest and sentencing of Tibetan writer Lobsang Lhundup are reported to have connection with his writings critical of the Chinese rule in Tibet and his involvement in teaching Tibetan history.

Tibetan singer and musician Lhundrup Drakpa known for his artistic skill and songs focusing on asserting Tibetan was arrested by Chinese authorities in Driru, Kham Nagchu in so-called Tibet Autonomous Region in May 2019, after publicly performing and released of his song “Black Hat”, that contains lyrics critical of repressive Chinese policies in Tibet. Following prolonged incommunicado detention, Lhundup Drakpa was sentenced to six years in prison in June 2020, understandably in connection with his song “Black Hat”.

Rinchen Kyi was arrested in August 2021 on charge of “inciting separatism” after holding a hunger strike protest against forcible closure of Sengdruk Taktse Middle School in Darlag county in Golog, Amdo Tibetan traditional province (Qinghai) in July 2021. Rinchen Kyi was reportedly taken away and remained in a hospital in Xining, the capital of Qinghai province, but was not diagnosed for any medical condition. When her family learned of this and rushed to the hospital, she had already been transferred to an unknown location. Her health condition and whereabouts remain unknown since then.

As the UN experts have jointly emphasized in the communication, the cases brought to the attention of China were representative of challenges faced by Tibetans on a daily basis, in particular Tibetan who engaged in the protection of Tibetan language, culture and traditions, or merely expressing critical views about Chinese policies in Tibet.