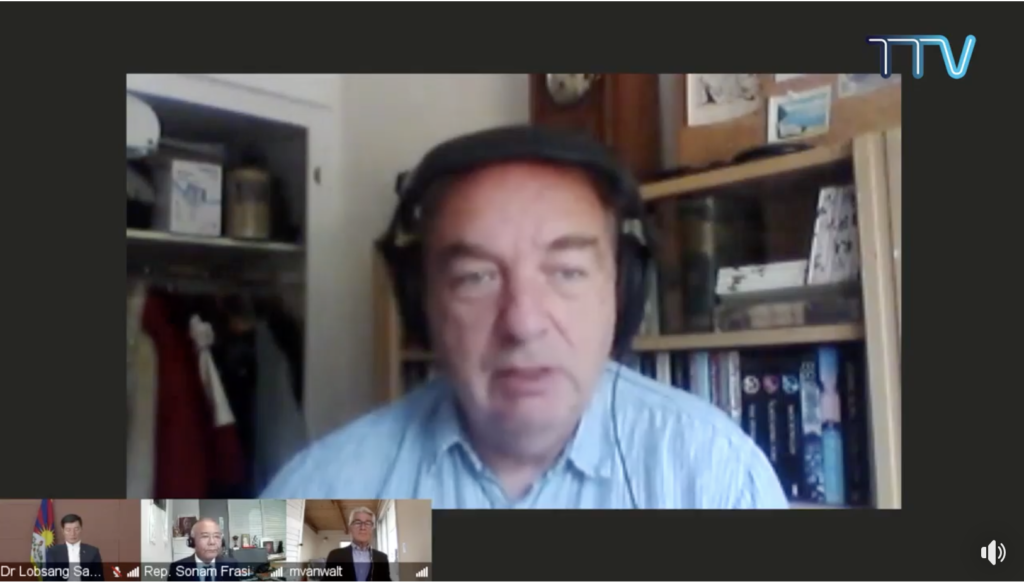 Dharamshala: With a bipartisan consensus in Washington on toughening stance on China, the US government has already embarked on the path of economic decoupling with Beijing. Taking it a step further, the US Secretary of State last month issued a vociferous call for allied countries and Chinese people to join efforts to change China: to insist at all times on reciprocity, transparency and accountability from them.

Despite constant technical interferences during the live streaming, the hour and a half panel event transpired into a coruscating discussion on prospects and analysis on Tibet in light of growing climate of anti-China furore and the international push back at the PRC government’s hegemonic ambitions.

Among the illustrious panel of speakers were Rt Hon Norman Baker, former UK Home Affairs minister, former liberal democrat MP, and long time Tibet supporter. He is former president of Tibet Society, the world’s oldest Tibet Support Group and a member of the All-party parliamentary group for Tibet in the House of Commons, Westminster parliament. He has written many articles on human rights abuse of Chinese occupied Tibet.

Addressing the critical question on how the capitals in Western Europe and London will heed the call of the US and allies, Rt Hon Baker proposed three policy recommendations for the EU and UK to enact in order to counter Chinese advances.

“First, we need to mirror the US with the Magnitsky Act to impose sanctions on individual members of the Chinese government who behave in the way we regard as reprehensible, unacceptable.”

“Secondly, we need to push Reciprocal Access to Tibet, which again the US has been leading on, in the British parliament. My former colleague of All-Party Parliamentary Group for Tibet, Tim Loughton who chairs that group has introduced the bill to require the UK govt to impose that. It should be adopted by the UK government.”

“Third issue which we need to be very, very firm on is the issue of the succession to His Holiness. I am very pleased that in EU and UK takes steps that make it very clear that we will not accept Chinese imposition of fake Dalai Lama as they have imposed a fake Panchen Lama.”

In the case of the issue of the Dalai Lams’s succession, he stressed that it was incredibly important that the world says it very clearly, and that “any Chinese officials who attempt to be part of this fiasco of appointing their own Dalai Lama should be subject to Magnitsky Act conditions. They should have to pay for that personally.”

Speaking in terms of the prospects for Tibet and resolution of its vexed, prostrated issue, Rt Hon Baker said given Britain historical association with Tibet and the neighbouring China and India, the UK is in “a very strong position to be able to challenge the lies that Beijing tells about the history of Chinese involvement with Tibet” and “to give evidence to that fact from our archives and historical record.”

“We saw that Tibet was an independent nation and that will not be forgotten.”

At a time when more and more countries are beginning to push back at the authoritarian and dictatorship one-party rule, recognizing its multitudinous presence in respective countries as security, political threats, Rt Hon Baker said, UK too will fight back.

The CCP now poses threats to the world equivalent of Nazi Germany, he said as he urged countries to stand up to China together. “Nazi Germany ended up in war because the world did nothing about it…Thats why we look at the US response and we support their view that if we don’t change communist china, they will change us.”

However, the former minister noted the governments needed to engage in a far more coordinated way, especially the countries that are more vulnerable to the China threat.

“In terms of Chinese dams which are drying out rivers in India, the border villages being conducted along the Chinese borders in Tibet, and the fact that we had incursions of Chinese led to the confrontation of Chinese and Indians quite recently. We need to get the India govt more involved. They don’t want to necessarily antagonise Chinese but like everyone  else, they have to realize that doing nothing is not an option anymore.”

But in respect to bringing concretes, real change in China, he argued that such a change can be induced from inside.

“Soviet Union govt changed because of Gorbachev. The Chinese government will have to find its own Gorbachev to change.”

In the meantime, the rest of the world can try to educate the Chinese people who have been fed lies and encourage them to replace the Xi Jinping and his colleagues with a government more open to reason and to respecting human rights. At the same time, protecting one’s national interests, human rights, and continuing to push back Chinese tactics.

“It is a long battle, one that won’t be won overnight. but we have to engage in a coordinated way, then we can eventually win,” said Rt Hon Baker.

“As you said, Sonam [Frasi] in the beginning, no government last forever, no empower last forever, so let us now limit the damage which the governs in Beijing can do and let sit back and let wait for the day that ghastly govt of Beijing is no more.”