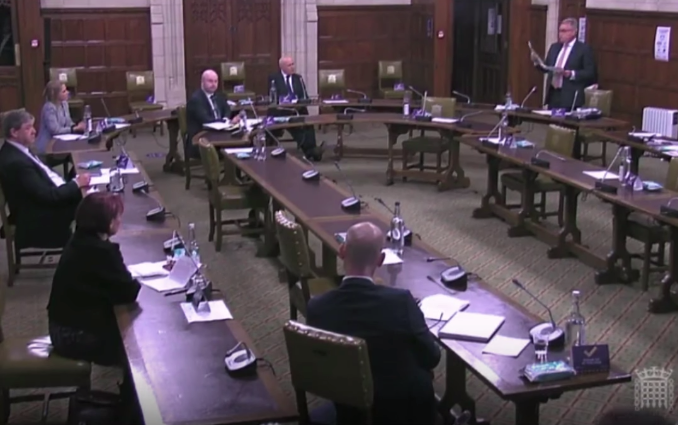 9 MPs of the UK Parliament call out China over human rights abuses in Tibet at Westminster Hall debate. Photo: Screengrab

At a UK parliamentary debate, nine Members of the Parliament called out the Chinese government’s violations of human rights in Tibet, while particularly considering the September report of over half a million Tibetans in the so-called Tibet Autonomous Region forced into militarized labour camps this year. The Westminster Hall debate “China’s rapid expansion of the labour programme in Tibet co-published by the Inter-Parliamentary Alliance on China” was held on 7 October.

The Westminster Hall debate was moved by MP Sir Iain Duncan Smith, who is also one of the co-founders of the newly formed Inter-Parliamentary Alliance on China (IPAC), an international cross-party group of legislators working towards reform on how democratic countries approach China. The debate was based on the report released by the Jamestown Foundation on 22 September and compiled by Dr. Adrian Zenz, an advisor to the IPAC, which exposed China’s policies coercing over half a million Tibetans into mass “vocational training”.

Sir Iain Duncan Smith opened the debate with the “shocking” findings of the said report and noted, “The findings of the report are particularly interesting because they show that there has been mandatory—I use this term advisedly—vocational training, which basically means driving out the sense of identity of the people in Tibet. Alongside these programmes, there are forcible labour transfer schemes. Those are slightly gentle words, but what they mean is that people are being taken from one place and put into camps, a lot like the Uyghurs we uncovered, who are forced to do hard labour in all sorts of areas and without proper pay or support.”

Urging the Government to become a lead advocate and support Magnitsky-style arrangements against the Chinese officials responsible “for the use of forced compulsory labour in Tibet and in other areas,” MP Sir Iain Duncan Smith said, “We need to look at mandatory sanctions with regard to global human rights abuses: sanctions such as travel bans or asset freezes.” He also shared concerns over Western companies and governments “turning a blind eye” to China’s behaviour and urged the Government to back an amendment to the Trade Bill in the Lords” which would nullify trade arrangements if the High Court determines that a proposed trade partner has perpetrated genocide. He further remarked, “The peculiarity of the situation is that if China were any other country in the world, every Government would call it out. They would demand change. Imagine if it were a country in Europe, Africa, or anywhere else — there would immediately be demands and debates in the UN. That does not happen.”

Echoing the concerns, MP Wera Hobhouse stated, “It is shocking that in the 21st century we are still having to speak out against the barbaric acts of a totalitarian regime. […] We have a duty to stand up for those rights on behalf of not only persecuted people inside China but all people, not least because the Chinese Communist Party is seeking to expand its influence around the world.” She pointed out how the report refers mainly to what is happening in the so-called Tibet autonomous region, which is only one part of Tibet and that “we must be careful not to overlook the Tibetan people” in the “vast areas of eastern Tibet are contained within the provinces of Sichuan, Qinghai, Gansu, and Yunnan.” MP Hobhouse underpinned the CCP’s long-sought approach to undermine that traditional lifestyle and noted, “Just as the CCP wishes to cripple the Tibetan language through Mandarin education, as we have heard, and to cripple Tibetan Buddhism through the demolition of monasteries such as Larung Gar, so it is trying to undermine the pastoralist lifestyle.” On the issue of His Holiness the Dalai Lama’s reincarnation, MP Wera Hobhouse called on “the Government to publish their formal strategy” as “we should be ready to stand in defence of the Tibetan people if and when that moment comes.”

A strong and a long-time supporter of Tibet, MP Tim Loughton stated that since the invasion of Tibet, the Chinese “regime has brought about the suppression of basic human rights, such as religion, cultural identity, free movement, and assembly, as well as subjection to arbitrary arrest, detention, disappearances, torture and racial discrimination. It is also imposing an environmental catastrophe on the world with the degradation of the Tibetan plateau, which is responsible for the water sources that feed or refresh almost 40% of the world’s population. That must not be a forgotten or hidden disaster anymore.”

Calling China “a serial abuser of human rights and cultural identity” for the abuses and suppression of the Tibetans, Uyghurs, Mongolian minorities, and Hong Kongers, MP Tim Loughton remarked that the labour transfer policy, the sudden change of the traditional nomadic or farming lives by turning the Tibetan nomads and farmers into menial labourers is “absolutely appalling” and must be called out for what it is.

MP Tim Loughton reiterated the need to put into effect the Tibet Reciprocal Access Bill which he introduced in the House of Commons last year in July and stressed, “We need this law to send out a strong signal from this country that Governments cannot abuse their own people in secret, because we will call it out. Human rights abuses of this magnitude, wherever they happen, must be called out. China has no divine right to immunity.” He also raised the need for a UN special investigation into genocide and the use of slave labour by the Chinese authorities.

Additionally, MP Kerry McCarthy raised China’s continued “efforts to sinicize Tibetan Buddhism” as with the demolition of two historic Buddhist academic institutions, Larung Gar and Yachen Gar. “Tibetans are being detained for sharing photos of the Dalai Lama, sharing books written in Tibetan, and even speaking to relatives about the importance of the Tibetan language. That is a clear, orchestrated attempt to remove Tibetan culture from Tibet.”

MP Fiona put forward suggestions for the government to use the Global Human Rights Sanctions Regulations 2020 to target the officials responsible for the use of forced labour in Tibet, and the installation of a special rapporteur to investigate forced labour in China. She talked about the supply chains in Tibet, Xinjiang, and other regions in China affected by forced labour. The issue of Reciprocal access to Tibet was also raised by Fiona which she said was already there in the 2016 report. MP Fiona questioned, “Will the Government now show that they intend to fulfill the express purpose of those sanctions, and hold to account the perpetrators of the human rights abuses we have heard about today?” She asked if the minister will raise this issue at the UN and call on the UN Secretary-General to install a special rapporteur to investigate forced labour in Tibet.

Welcoming the “positive change” in the attitude of Governments towards China, MP Mr. Alistair Carmichael observed that “when we criticise the regime in Beijing, the Chinese Communist party, we do that because what it does is worthy of criticism.” Reiterating the calls for Magnitsky-type sanctions and that they “have the legal obligations as well as a moral imperative” by the Modern Slavery Act 2015 to ensure supply chains of companies operating in the UK have not been using forced labour, Mr. Carmichael further said.

MP Patrick Grady noted that though the “Chinese regime denies [forced labour] and says that everything is voluntary and nothing is forced, that does not match the reality that has been reported and the experience elsewhere.” He said that journalists, academics, and international observers should have a right of independent access for monitoring in Tibet and called on the UK Government to “demonstrate that it will have the courage to rise to the challenges.” He further commented on His Holiness the Dalai Lama’s reincarnation issue.

MP Stephen Kinnock marked that his party is “profoundly concerned by the human rights abuses in Xinjiang against the Uyghur Muslims. We have called repeatedly on the Government to take action and we are deeply troubled to hear that similar abuses of human rights are taking place in Tibet.” He mentioned how the UK’s economic relationship with China in the past, has led to “turning a blind eye to human rights abuses in exchange for the naïve and narrow promise of future economic benefit.” MP Kinnock also called “for the UK Government to push for the appointment of a UN special rapporteur for the full and transparent investigation of forced labour and ethnic persecution in Xinjiang and Tibet.”

The Minister for Asia, MP Nigel Adams, emphasised on China “to lift the severe and unjustified restriction on access” to Tibet and to respect all the fundamental rights including freedoms for religious and cultural expressions. “The appointment of a new Dalai Lama is clearly a religious matter, and one for the relevant religious authorities to decide, in line with freedom of religion or belief. It is worth pointing out that we have also raised the case of the Panchen Lama with the Chinese authorities. We have demanded confirmation of his welfare and that he enjoys freedom of movement,” said MP Nigel Adams. “We have repeatedly held China to account for its human rights violations, and we will continue to do so.”

Sir Iain Duncan Smith concluded the debate with the “hope that the calling out of those abuses in Tibet […] will let the Government know that we can no longer just say that we want a good and constructive relationship with China. We want an honest relationship with China—one in which, when something is wrong, we say it is wrong. In this case, if genocide and abuses of human rights are taking place, we now, as a Government and as a people, must call them out and take action.”

The MPs who participated in yesterday’s debate chaired by Mr. Hollobone, were Sir Iain Duncan Smith, Tim Loughton, Nigel Adams, and Fiona Bruce from the Conservative; Wera Hobhouse and Mr. Alistair Carmichael from the Liberal Democrat; Stephen Kinnock and Kerry McCarthy from the Labour; and Patrick Grady from the Scottish National Party.