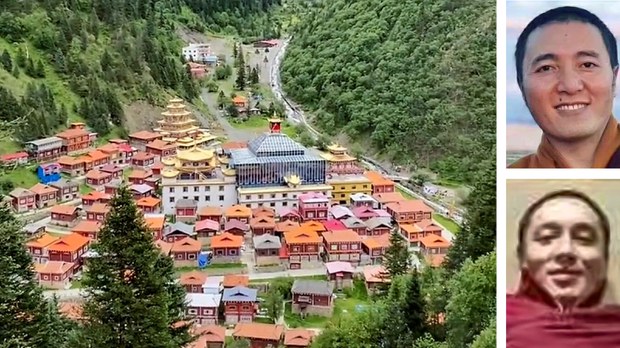 Picture of the Nenang monastery is shown on the left, and arrested monks Tenzin Norbu and Wangchen Nyima are shown on the right. Photo: RFA

Tenzin Norbu and Wangchen Nyima of Nenang Monastery in Drakgo were arrested on 15 August 2021. According to our source, they are currently being held in Tawu (Ch: Daofu) County prison in Karze (Ch: Ganzi).

Officials have withheld any information about the arrest and the charges of the two monks from their family members causing fears for their life and safety, said the source. Though the reason for their arrest is unclear, it is suspected that it might be due to their involvement in the monastery’s running of informal classes teaching Tibetan language, culture and religion for local Tibetan children. China’s education policy degrading the use of Tibetan language in schools has led to parents sending their children to these informal classes organized by local monasteries. Such activities have drawn extra scrutiny from the Chinese officials on the monks, who are targeted and placed under heightened monitoring.

“The two monks are amongst those targeted and local authorities have been monitoring them for a long time”, explained our source. Wangchen Nyima is a well-known advocate for Tibetans’ education and health. He was earlier arrested in 2015 when the Chinese government forcibly shut down schools in his monastery. His brother Orgyan Choedrak was also arrested at the same time.

The two monks were brothers and also nephews of Tulku Choekyi Nyima, a respectable and revered Abbott of Nenang Monastery. Tulku Choekyi Nyima was a student of Khenpo Jigme Phuntsok, a revered Nyingma lama and the founder of Larung Gar, the largest Tibetan Buddhist monastic academy.

According to other reports, on 18 August 2021, Khenpo Thubten and a monk named Bukyo were killed in a fire, believed by the Tibetans to have been set upon by the Chinese officials, in the Nenang Monastery assembly hall.

Since December 2021, Tibetans in Drakgo were made to experience the replay of the Cultural Revolution when two huge Buddha statues and other objects of worship including prayer wheels and flags were demolished. They are further made to obey official decrees and policies undermining Tibetan identities i.e. language, culture and religion. Failing to comply such orders have resulted in the arrest, detention, torture and ill-treatment of Tibetans. At least about a dozen have been arrested and tortured for sharing information on the recent crackdown to outside Tibet.

Following the series of Chinese government’s demolitions in Drakgo, with the dismantling of the 30-feet Buddha Jampa Gonpo (Maitreya, the Buddha of future) statue between 21-22 December, Chinese authorities are now demolishing the quarters of lamas and monks at Gaden Namgyal Ling in Drakgo.

Further, the government is carrying out poultry farming and piggeries projects where authorities are making Tibetans to construct the farms while threatening the locals with heavy monetary punishments and prison sentences if they don’t give full compliance. Moreover, officials are even planning to build such poultry and piggery farms at the same location where they demolished Gaden Nangten School. The school, run by the Drakgo Monastery, was demolished last October.

Tibetans are being arbitrarily arrested and detained in the name of needing “patriotic education” and training, where they are forced to praise the rule of the Communist Party and learn Chinese language. Officials are also severely punishing Tibetans for even small things such as showing “improper facial expression” and refusing to take part in the training sessions.

“The continuing ordeal of having to attend those ‘patriotic education’ training and having to suffer severe beatings at the hands of the Chinese officials in Drakgo has been taking place as early as November 2021”, explained our source. The beatings were so severe that several Tibetans have reportedly lost consciousness while one monk suffered a serious injury to his eyes.

– Filed by the UN, EU and the Human Rights Desk / Tibet Advocacy Section