‘To us, the anniversary means illegal occupation and violent takeover of the Tibetan people’: CTA President on 70th anniversary of China’s annexation of Tibet 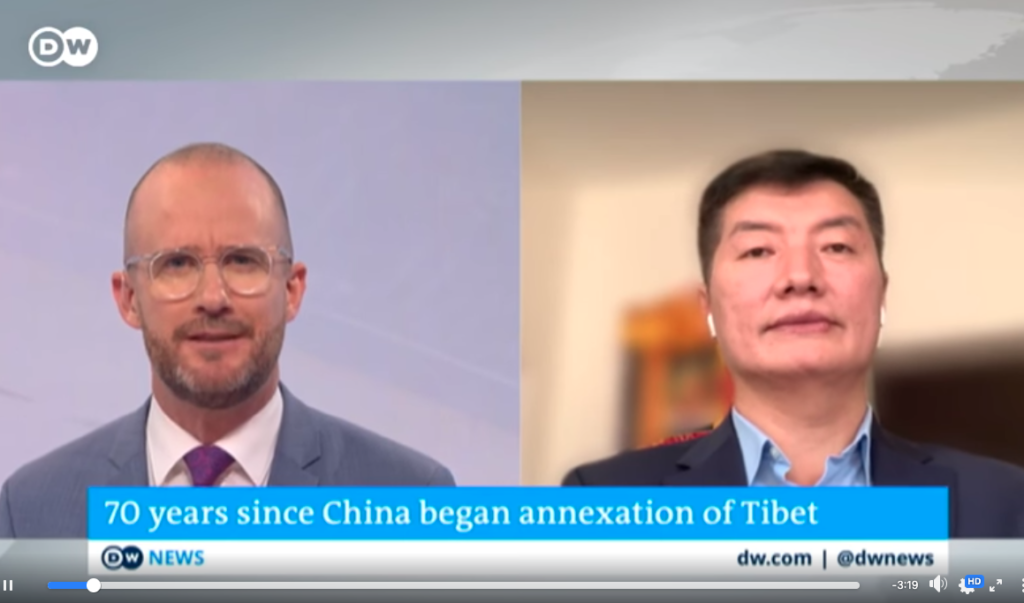 Dharamshala: Commemorating the 70th anniversary of Chinese annexation of Tibet, CTA President, Dr Lobsang Sangay spoke to Anthony Howard of Deutsche Welle on the historical impacts, the ever-growing global movement for the just cause of Tibet, flourishing of Tibetan democracy and the 70 years of ongoing resolve for freedom and autonomy.

Anthony Howard began with a question on the significance of the 70th anniversary of China’s annexation of Tibet to the President.

Dr Sangay replied, “To us, the anniversary means disruption, illegal occupation and violent takeover of the Tibetan people.”

He cited the Chinese military archives wherein the violent occupation is documented. “The month of March 1959 to October 1960, 87,000 Tibetans were killed and 98% of monasteries and nunneries were destroyed, 99% of monks and nuns were disrobed.”

In the view of stability for China, Dr Sangay said Tibet holds the strategic importance.

Quoting CCP leader and founder, Mao Zedong who said, “Tibet is the palm we take over, then we go after five fingers, from Ladakh, Nepal, Bhutan, Sikkim and Arunachal Pradesh’, Dr Sangay said these efforts are in line with its long held policies.

He also drew attention to the economic enterprise of occupying Tibet, which covers 2.5 million square km of land, the size of Western Europe, endowed with natural resources. “When he says peace, it means the assimilation of Tibet, and when he says stability, it means the repression of the Tibetan people, to control Tibet.”

The CTA President also rejected the claims of “China’s officials would point towards Tibet literacy rising from around 5% to 85% and there has also been major investment in infrastructure, schools and hospitals. Have these changes benefitted Tibetans?”

Taking apart those claims, CTA President highlighted that in comparison, the literacy rate of the Tibetan refugee community is 94%.

And he also called out the infrastructure development claims, which primarily benefitted the Chinese people, as “assimilation drive”.

He added, “When they talk about development, the question is who benefits from it? And primarily, Chinese people benefit from development projects in Tibet.”

Finally, on the question of fighting the difficult battle against China for the Tibetan cause, President Sangay said despite the challenges, Tibetans have preserved and even on the 70th anniversary of its annexation, the Tibetan cause is at the forefront in today’s global fight against the Chinese repressive regime.

“So far, for the last 60 years, we are still standing on our feet, we are still pursuing nonviolence as our principle and genuine autonomy as our goal. So we are still here,” he said.

“Whatever happens around the world affects you, including the American Presidential election or the change in Prime Ministership of Japan, or any country in Europe. But you do the best you can to impact the world.”