Tibet’s old way of life is slow dying. Not even self-immolation will change that

In 2008, the Tibetan monastery of Kirti was a focal point for the anti-Chinese protests that consumed dozens of lives and led to the imprisonment of innumerable Tibetans. 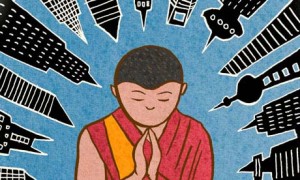 In March this year, a young Tibetan from Kirti monastery set himself on fire. Nearly a dozen young Tibetan men and women have immolated themselves since then. Illustration: Satoshi Kambayash

In March this year, the third anniversary of the protests, a young Tibetan from the monastery doused his body with kerosene and set it on fire. Nearly a dozen young Tibetan men and women have immolated themselves since then.

Self-immolation is a radical form of protest for Tibetan monks, a violation of Buddhism’s basic tenets of respect for all sentient lives. “Desperation” was the response from Kyabje Kirti Rinpoche, the 70-year-old exiled abbot of Kirti monastery, when I asked him last month to explain the recent spate of self-immolations. He described the repressive measures of local Chinese authorities: indiscriminate arrests; checkpoints on the roads; police camps inside monasteries; and the ideological re-education campaign in which the 2,500 monks at Kirti, confined to their cells, are forced to repeat such statements as “I oppose the Dalai clique” and “I love the Communist party”.

The foremost Chinese commentator on Tibet, Wang Lixiong, has described how the Communist party’s oversized bureaucratic machines in Tibet, which reflexively respond to mass disaffection with heavy-handed measures, impair the central government’s ability to provide an imaginative solution to the Tibetan crisis. And Tibet seems, on first glance, an instance of an unremittingly authoritarian and secular regime pressing down on a docile religious population.

But it is also true that, as a path-breaking study of the 2008 protests by the Beijing-based NGO Gongmeng law research centre (subsequently shut down by the Chinese authorities) points out, “there is now a new frame of reference for measuring reality” in Tibet. The report asserts that it is no longer “a self-sustaining Tibet protected by the natural environment, but a realm which, whether actively or passively, is intimately connected to all of China and the rest of the world”.

For some years now, Tibet has been part of the world’s fastest-growing and globalising economy – indeed Tibet, helped by government investments and subsidies, has enjoyed higher GDP growth than all of China. There has been a general rise in living standards. Many Tibetan regions have been transformed. A new “Tibetan aristocracy” consisting of ethnic Tibetan party cadres and businessmen has come to the fore.

Many Han Chinese may reasonably wonder why Tibetans, apparently showered with government largesse, are so ungrateful. But as the Gongmeng report points out, “the assistance and ‘development’ brought by the Han is often accompanied by forced change and conflicts”. The logic of development, for instance, forces Tibetan nomads off their grasslands and brings Han Chinese migrants into Tibet’s cities. The unavailability of jobs together with the undermining of Tibetan language has led to a general feeling of disempowerment among the population. And rural-urban inequality has rapidly grown.

Of course, much of the Chinese population also suffers from the humiliation of being left behind by a few lucky rich. But as Wang Hui, one of China’s leading independent thinkers, writes, the gaps of income and opportunity in minority areas are “closely connected with the difference in traditions, customs, language, and the position in the economic market that exists between ethnic groups”.

The radical dissimilarity of Weltanschauung (worldview) is crucial here. One Tibetan interviewed by the Gongmeng researchers clarifies that “a Tibetan’s prosperity is more about freedoms such as religious belief, a respect for people, a respect for life, the kind of prosperity you get from extending charity to others”. Chinese-style modernisation has imposed alien values on Tibetans, forcing them to accept “development” and “consumption” as the last word.

The authors of the Gongmeng report sum it up: “When the land you’re accustomed to living in, and the land of the culture you identify with, when the lifestyle and religiosity is suddenly changed into a ‘modern city’ that you no longer recognise; when you can no longer find work in your own land, and feel the unfairness of lack of opportunity, and when you realise that your core value systems are under attack, then the Tibetan people’s panic and sense of crisis is not difficult to understand.”

In this sense, Tibetans are akin to other uprooted and bewildered victims of globalisation and modernisation, such as the Indian villagers protesting against nuclear plants on their lands or the indigenous forest-dwelling peoples in central India resisting their dispossession by a nexus of mining corporations and governments.

The usual simple-minded oppositions between authoritarianism and democracy deployed in discussions of India and China are not of much use here. What these conflicts, cutting across differences in political systems, illustrate is a deeper clash: a powerful and aggressive ideology that upholds social and economic individualism against a traditionally grounded respect for collective welfare and the environment.

But what specific conditions triggered these recent protests in Tibet? The sociologist Béatrice Hibou offers a persuasive answer in her new book, The Force of Obedience, which, ostensibly about Tunisia, is also insightful about the psychologies of many other semi-globalised and unequal societies. Hibou describes how it wasn’t so much top-down coercion by a one-party state as the promise and practices of inclusion into global modernity – the visible bonanza of GDP growth, the creation and co-optation of local elites, and the myth of an ever-imminent “economic miracle” that would lift all boats – that had generated a kind of “obedience” among the majority of the population.

For a long time, things seemed appealingly “stable” to foreign governments and investors. Tunisia had achieved a satisfactory macroeconomic equilibrium. It was slowly integrating into the world market. The widely advertised possibility that anyone could join the conspicuously consuming new middle class seemed to be defusing political anger among the disenfranchised. And then a poor vegetable vendor called Mohamed Bouazizi broke the spell, burning himself to death and igniting mini-revolutions across west Asia and north Africa.

Writing to Martin Luther King about the dozens of Buddhist monks who immolated themselves in Vietnam in the 1960s, the Vietnamese monk Thich Nhat Hanh clarified that they “did not aim at the death of the oppressors, but only at a change in their policy”. Events in the Arab world following Bouazizi’s death have confirmed the political efficacy of this extreme act of self-negation.

Still, Tibetan self-immolations cause more embarrassment than anxiety among Chinese authorities. As China increasingly appears as a saviour of many struggling economies, the world’s conscience looks likely to be as little troubled in the future by Tibet as it is by Kashmir – British MPs had failed to even discuss the self-immolations until this week, and did so only after being pressed by the advocacy organisation Avaaz.

Most people may also be too distracted by the destruction of their own fantasies of easy wealth and consumption to notice a greater tragedy: that, as Philip Larkin wrote in his poem Nothing to be Said, “For nations vague as weed / For nomads among stones … Life is slow dying”.