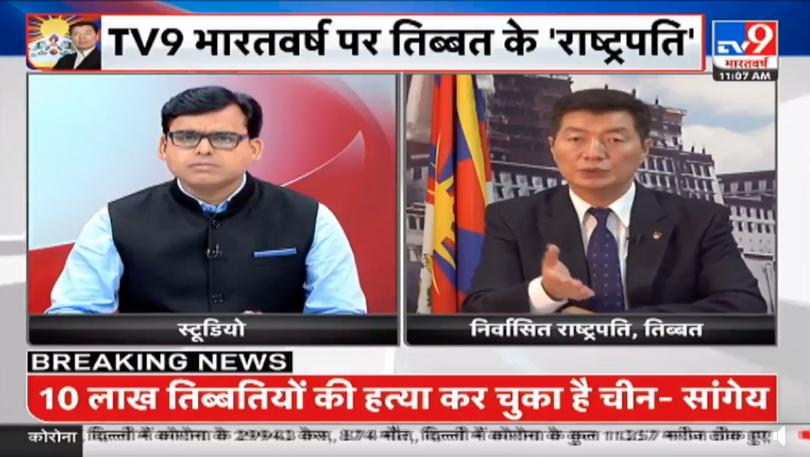 Dharamshala: In an interview with Abhishek Upadhyay, Editor, TV9 Bharatvarsh, the President of the Central Tibetan Administration Dr Lobsang Sangay discussed the worsening situation with regard to religious and political freedom as well as economic, social, and cultural rights of the Tibetan people and the six decades-long Tibet campaign that he said remains ever-vigorous and relevant.

Speaking on the critical situation inside Tibet, the President explained in detail the non-violent resistance of the Tibetan people inside Tibet to the intensified crackdowns imposed by the Chinese government.

At least 154 Tibetans inside Tibet have burned themselves in a desperate protest against the Chinese occupation of their homeland and the repression since 2009, he said, highlighting the extent of repression that pervade Tibet under the Chinese occupation. He also spoke about China’s demolition at Yachen Gar Tibetan Buddhist centre in Tibet and eviction of thousands of Tibetan nuns.

He recounted that more than 1.2 million Tibetans have died as a direct result of Chinese occupation and Tibetans having experienced first hand China’s iron fist rule for 6 decades could well be considered a big brother in relation to Hong Kong and Taiwan. Furthermore, he said Tibetans have not given up but campaigned globally against China’s human rights violation in Tibet and proactively pursued dialogue with the Chinese representatives based on the Middle Way Approach to find a lasting solution to the issue.

Although historically Tibet was an independent country and legally, has every right to be free, he said, “pragmatically the most viable solution and the most peaceful is through Middle Way Approach and dialogue as envisioned by His Holiness the Dalai Lama.” He said, since the early 1970s, the CTA has pursued dialogue with the Chinese government based on the Middle Way Approach and global support that is received for the Tibetan cause has further re-affirmed CTA’s commitment to MWA and peaceful dialogue. He mentioned the Tibet Policy and Support Act which was passed with supermajority vote in the US Congress and is slated to be debated in the Senate.

“Hence Tibet issue is very much alive and we will continue to pursue peaceful resolution of Tibet through dialogue based on MWA with China,” he noted.

The President said the world shouldn’t hesitate to voice its support on the Tibet issue, saying that the Indian people should especially to study the issue of Tibet to understand China’s tactics. If unchallenged, he warned that the Chinese government would continue to claim more territories as it did with Tibet.