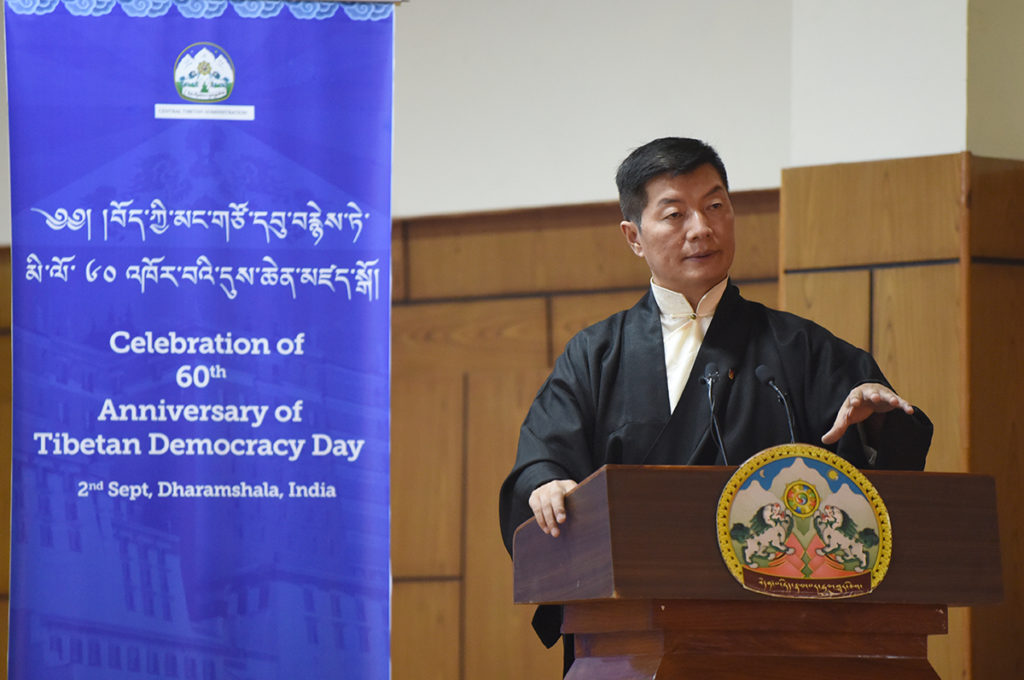 ‘Among the countless legacies of His Holiness, one of the greatest legacies is his democratic ideals,’ Sikyong in his address at the celebration of the 60th anniversary of Tibetan democracy day at CTA headquarters. Photo/Tenzin Phende/CTA

Dharamshala: Tibetans worldwide on Wednesday celebrated 60 years since it took its first crucial step towards democracy with the establishment of the first elected representative body of Tibetan people (then called The Commission of Tibetan People’s Deputies) guided by the pioneer himself, His Holiness the Dalai Lama which forever changed the course of Tibetan history.

The senior leadership of the CTA observed a ceremony at the headquarters here to mark the historic day, and to pay tribute to His Holiness for the priceless gift of democracy.

“For the last sixty years, it was His Holiness’ vision, his idea which was way ahead of many other countries and definitely ahead of Tibetan society,” said Sikyong Dr Lobsang Sangay, speaking on the occasion.

On March 2011, His Holiness the Dalai Lama had relinquished all his political authority to the democratically elected leader, Dr Lobsang Sangay in what marked as the final transition of Tibetan political system to a full-fledged and matured democracy.

Describing His Holiness extraordinary commitment and leadership to these reforms, Sikyong Dr Sangay said, not only did His Holiness reject his people’s repeated pleas for him to remain in power but ‘even from as early as 1963, His Holiness mandated that there be a provision of his own impeachment in the constitution’.

Among the countless legacies of His Holiness, one of the greatest legacies is his democratic ideals,” Sikyong said. He hailed His Holiness a true democrat who was drawn towards fairness and democratic principles from young age, and most remarkably, in 1954 when he witnessed for the first time, a true democratic debate in Indian parliament.

“He was rather pleasantly surprised because he saw a very noisy, ruckus Indian parliament. He saw a member of parliament criticizing the then PM Pandit Nehru. Having really moved by it, His Holiness took it as an idea that the Tibetan government should have similar system.”

With profound tribute and gratitude, Sikyong thanked His Holiness for the gift of Tibetan democracy because of which the Tibetan governance system has progressed and matured into a full-fledged democratic institution with elected representatives from the three traditional provinces of Tibet, four Buddhist sects and Bon religion—thus lending the CTA leadership uncontested legitimacy as the true representative of the Tibetan people and their aspirations.

At the 7th Central Symposium on Tibet Works from 27 to 28 August, Xi Jinping had laid out four key policy directions on Tibet which include combating ‘separatism’ to instil devotion for the “motherland” and Sinicizing Tibetan Buddhism and adapting Tibetan Buddhism into Chinese socialist system.

“I would like to strongly refute the speech made by Chines President Xi Jinping and the visit of the foreign minister [Wang Yi] to Tibet,” Sikyong said.

In both the speeches, he added, they introduced major policies and guidelines all of which were a clear indication that “ultimately the Chinese govt want to convert Tibet into a Chinese province and make Tibetans into Chinese people.”

Rejecting Xi’s policy to “adapt Tibetan Buddhism to socialism in the Chinese context” as the most vicious policy on Tibet yet, he said to force Tibetans who have embraced and practised Buddhism as the centre of their lives to treat communism as more important than their faith is not only a violation of international religious freedom but is absolutely unacceptable.

“To say Buddhism should serve the CCP ideals and motherland of China is absolutely unacceptable to us.”

“Especially to Tibetan monks and nuns, they regard the monastery as their home and next life as more important than this life. To make Buddhist ideals, beliefs lower than national laws, motherland and communist party is in clear violation of religious freedom. It is absolutely unacceptable.”

Furthermore, Sikyong noted that the extent of policy and guidelines strategised at the top-level Chinese meeting were indicative of the crucial importance of Tibet to China’s stability and security. 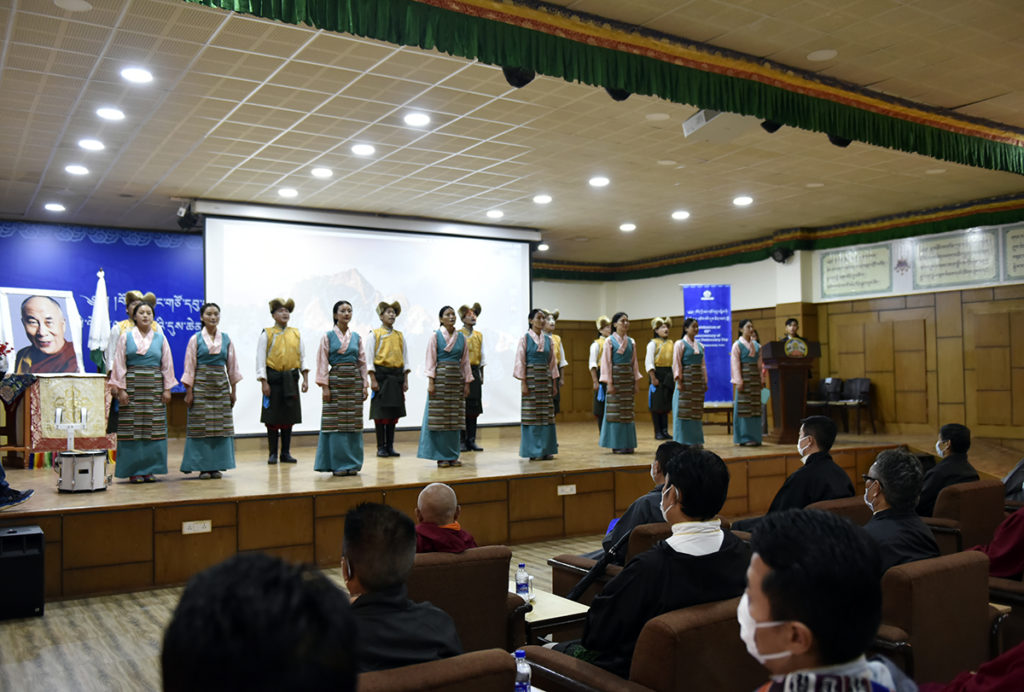 With the 2021 General Elections of Sikyong and members of 17th Tibetan Parliament approaching, he urged active participation in the democratic process to ensure that the leaders remain accountable and true to democratic values.

Citing reports of China’s aggressive meddling in US and Taiwan elections, Sikyong also told the Tibetan public to brace for potential manipulations in the Tibetan electoral process. He urged vigilance against fake news, bots and falsified social media accounts, and various propaganda tactics designed to sow disunity, even foster riots.

In conclusion, he reaffirmed the CTA’s commitment to the Middle Way Approach and pledged to carry forward the vision of His Holiness by strengthening the foundations of Tibetan democracy.

Speaker Pema Jungney in his remarks said that unlike most countries whose people had struggled and given up lives for democratic rule of law, however, for Tibetans, “there never was any need for the people to sweat it out and shed blood through carrying out struggles, raising disturbances, and so on even to a minuscule level.” Rather it was gifted by His Holiness to his people.

“Even under the enormity of the tangles of hardship in living conditions that the situation in exile entailed in the early years, His Holiness made it a point to immediately resume his efforts to carry out the visions he previously had to direct the political system of the Tibetan people to the path of democracy,” Speaker Jungney said.

He further expounded in his statement the inception of Tibetan democracy day: “On 3 February 1960, a gathering of representatives from all the three traditional provinces and all the religious traditions of Tibet made a long-life offering to His Holiness the Dalai Lama at the sacred Bodh Gaya pilgrimage site. While at that time the representatives offered to Him a powerfully sworn oath in writing, giving solemn undertakings on the do’s and don’ts in the future courses of their conduct, His Holiness made it clear that the Tibetan system shall not remain as it was before, that it was most important that a democratic government system… And so it was that on 2 September 1960, the members of the first parliament of the Tibetan people took their oath of office with the offering of prostrations before His Holiness the Dalai Lama. And that was how, for the first time, the foundation of Tibetan democracy took place.”

In the years that followed, His Holiness had continued to push for step by step democratization of Tibetan polity, starting with the promulgation of the Tibetan constitution in 10 March 1963, election of women representatives in the Tibetan Parliament in the same year, and inclusion of Bon representatives from 1977 onwards; the direct election of the Kalon Tripa, the Chief Executive of the Central Tibetan Administration in 2001 and up until 2011, His Holiness pushed further significant reforms to give up the last vestiges of his administrative power.

“It bears no mentioning that it is owing solely to the kindness of and tireless efforts made by His Holiness the Dalai Lama throughout his life for the sake of the nation and people of Tibet that we have been able to achieve success in the democratic transformation of our political system,” he added.

“What emerges clearly from this symposium is that the government of China had no intention whatsoever to bring any change to its hard-line, repressive policy in Tibet. What is more, the symposium made it clear that China’s plan was to further its publicity efforts directed at the distortion of the history of Tibet, the reorientation of its culture, and the adulteration of its religious traditions. Meetings like these are therefore nothing but showpieces designed to mislead the outside world while their real objective is to transform Tibet, the home of the Tibetan people, into a land of Chinese people.”

He closed his remarks with a final appeal to the diaspora community to participate fully in the 2021 electoral process and ensure a genuine exercise in democracy.

Office of Tibet Brussel’s short documentary “I admire the spirit of the European Union – His Holiness the Dalai Lama”, Office of Tibet, DC’s docu-film ‘MAN OF COMPASSION, Stories of His Holiness, the 14th Dalai Lama’ and TIPA’s Yarkyi 2020 album were also unveiled at the event. 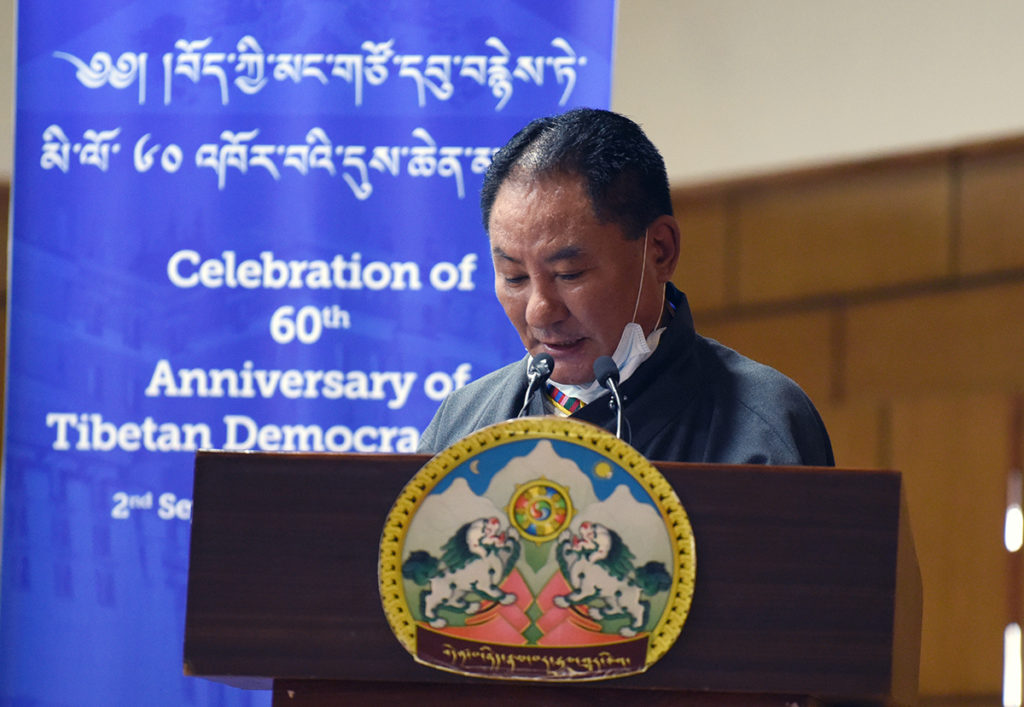 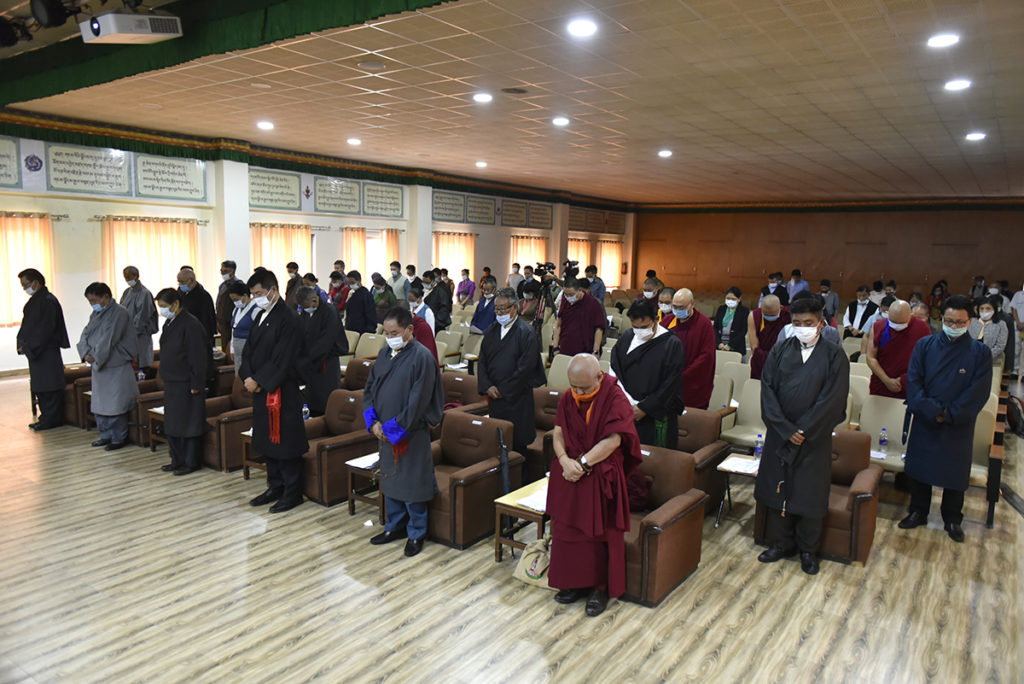 The CTA gathering observes a moment of silence to mourn the demise of the former Indian president Shri Pranab Mukherjee. 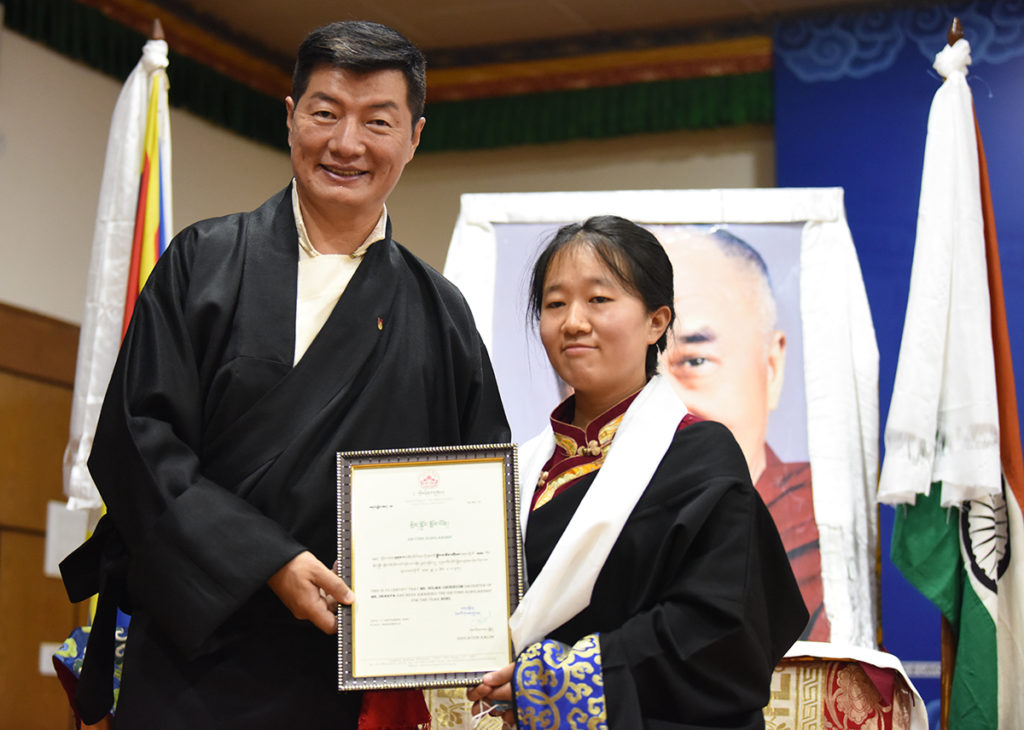 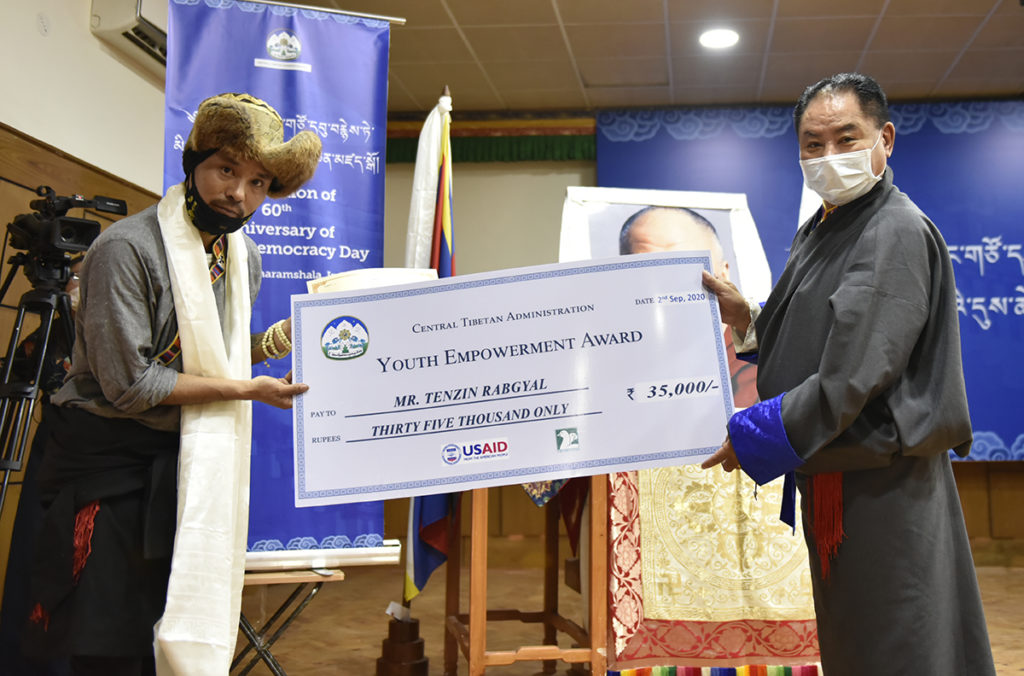 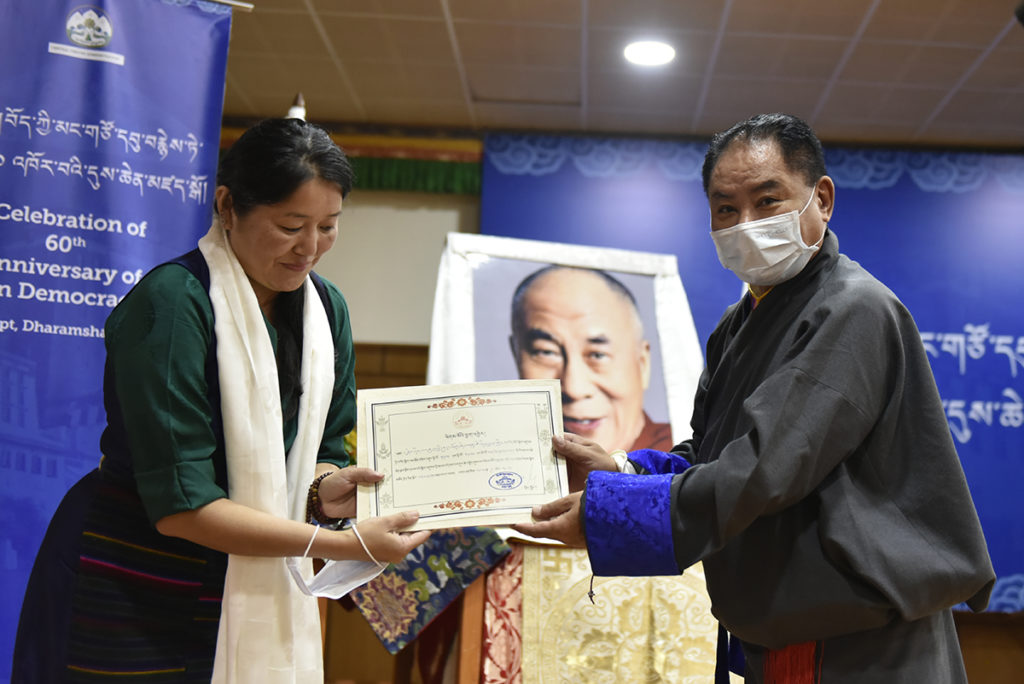 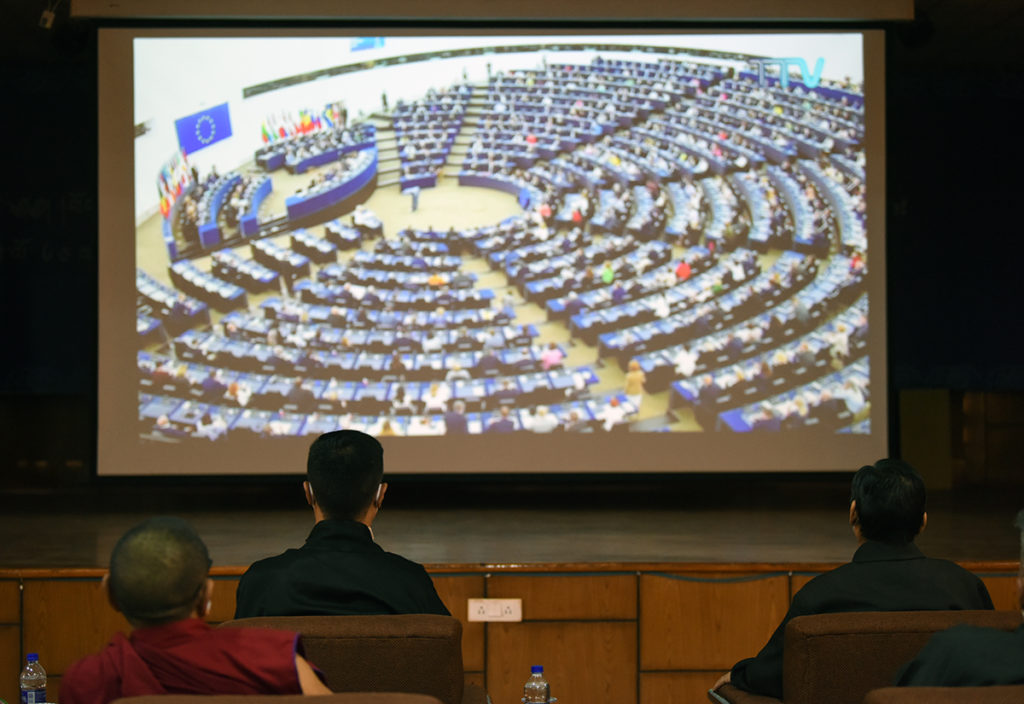 Inaugural screening of Office of Tibet Brussel’s short documentary “I admire the spirit of the European Union – His Holiness the Dalai Lama”.