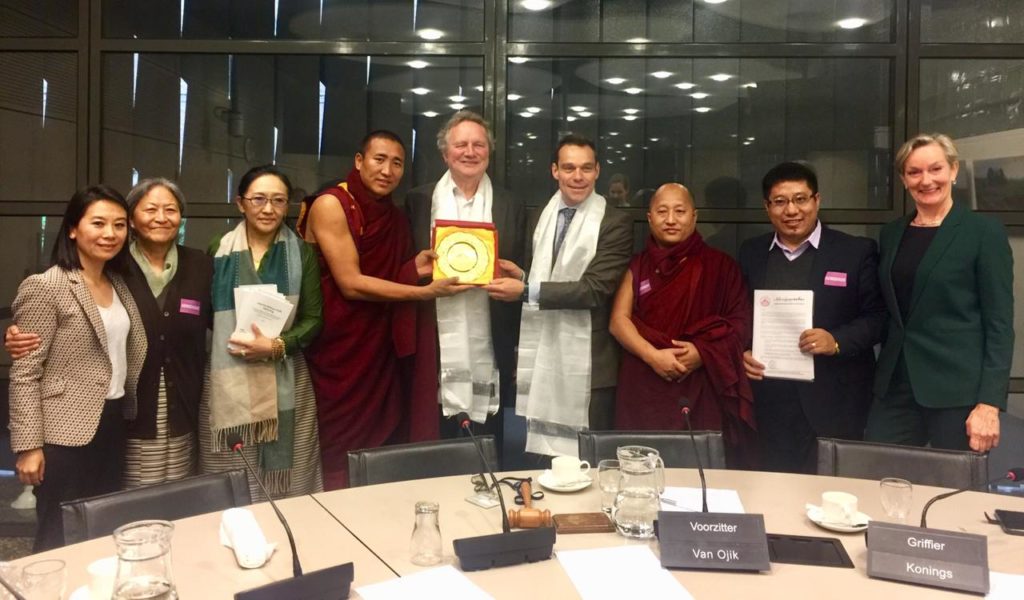 Members of the delegation were received at Amsterdam by Tsering Jampa, Executive Director of International Campaign for Tibet (ICT) Europe along with Christa Meindersma, Advocacy and Communication Director of ICT Europe; Wangchuk, president of Tibetan Community and members of the working committee of ICT Europe and Tibetan community in the Netherlands on 20 November.

Members of the Tibetan Parliamentary delegation also met and briefed Members of DWARS, Groen Links Dutch political youth organisation of Utrecht on Tibet’s issue and also answered questions asked by the students. Kunsel Dorjee, a young Tibetan girl whose father along with the whole family organized the meeting in a traditional Tibetan way, chaired the meeting.

On 22 November, the Parliamentary delegation met some important dignitaries of the Netherland and advocated Tibet’s issue.

Tibetan Parliamentarians thanked and appreciated the great work done by ICT Europe and also requested the members to continue supporting Tibet and Tibetans during their visit to the ICT Europe office on 23 November.

Tibetan Parliamentary delegation further met Tibetans and Tibet supporters, organized by ICT Europe. They addressed the importance of Tibet’s issue and answered questions asked by the public, followed by the news reporters. The meeting was chaired by Christa Meindersma, Advocacy and Communication Director of ICT Europe and Tsering Jampa, Executive Director of ICT Europe gave the Welcome speech.

During this visitation program, the Tibetan Parliamentary delegation led by Parliamentarian Tsering Lhamo along with three other Parliamentarians advocated Tibet’s issue in France, Belgium, and the Netherlands from 16-24 November.

The visit was organised by the Office of Tibet, Brussels, and was co-hosted by ICT, Europe. Rigzin Choedon, the staff of the Office of Tibet based in Brussels accompanied the Parliamentarians during the whole visitation program and Namgyal Samdup, Secretary of the Bureau du Tibet, Paris assisted during their visit in France. The Director along with the staff of ICT Europe organized programs and provided facilities during the visitation program in Europe.