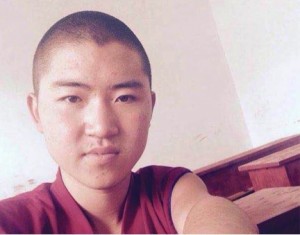 DHARAMSHALA: Chinese authorities have detained Jampa Gelek, a young Tibetan monk, as he walked in prayer around a Buddhist stupa near his monastery on 16 May, media reports say.

It is believed that the young monk had been photographed with a Tibetan national flag, which is banned inside Tibet, leading to his investigation and detention.

Though no concrete explanation for his detention was immediately available, local Tibetans believe that besides the Tibetan flag, the young monk must have also expressed a wish to set himself on fire protesting Chinese rule in Tibet.

A source from the region has further confirmed to media persons that Chinese authorities have found the slogan ‘Free Tibet’ written in English on the wall of his room.

“After Gelek was taken away at around 8:30 at night on 16 May, another group of security officials raided his room again at around 11:00 p.m and found the slogan written on the wall of his room,” the source reportedly told the media.

Nyitso monastery is also home to several Tibetan self-immolaters including Tsewang Norbu, Wangchen Dolma and Kelsang Yeshi who set themselves on fire on 15 August 2011, 14 June 2013 and 23 December 2014 respectively.