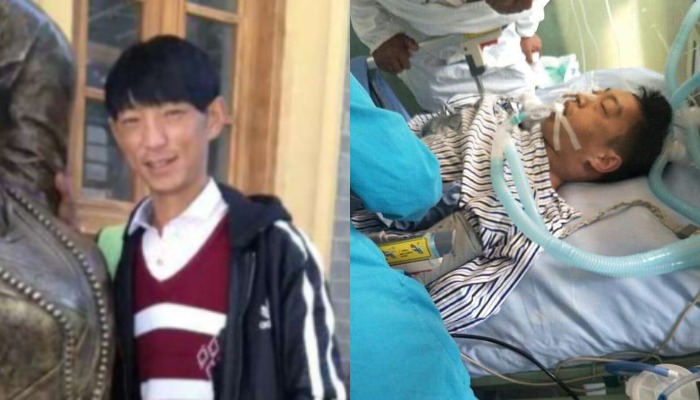 Former Tibetan political detainee Pema Wangchen died from prolonged illness due to torture and injuries sustained in Chinese police following his arrest in April 2016. Photo courtesy of VOA and VOT.

Dharamshala: A Tibetan man formerly detained and tortured for singing the Tibetan national anthem in April 2016, Pema Wangchen from Karze, passed away last Friday at a hospital in the Chinese city of Chengdu, Sichuan province. According to reports, on 26 April around noon, Pema Wangchen died from prolonged illness sustained through torture suffered while in Chinese police custody three years ago.

On 13 February 2016, the fifth day of Losar (Tibetan New Year), Pema Wangchen sang the Tibetan national anthem in public in his native village Wongsang in Karze county, a video of which was widely shared on the Chinese social media app WeChat. Later, in April 2016, he was arbitrarily arrested and detained for about 15 days during which he was subjected to brutal torture, according to reliable sources. He was released in poor health condition with bruises and swelling on his body. Following his release, Pema Wangchen suffered health problems and his health continued to deteriorate ever since.

Last week, Pema Wangchen, 31, was rushed to several hospitals in Karze and Chengdu for treatment. However, he passed away on 26 April at a hospital in Chengdu.

Pema Wangchen came to India in 2000 and returned to Tibet in 2002. He was a singer and driver by profession. He is survived by his three children and his parents Khaga (mother) and Pega (father).

Pema Wangchen’s brother Palden Thinley, a monk at Karze monastery was sentenced to four years for taking part in the 2008 peaceful protest against the Chinese rule.

This is the second torture-death reported this month.  Lekshey Thupten, a former Tibetan political prisoner from Phenpo, Lhundrup County in Lhasa, passed away due to ill health around the beginning of the month. Lekshey Thupten had also been subjected to inhuman treatment and torture while in prison.