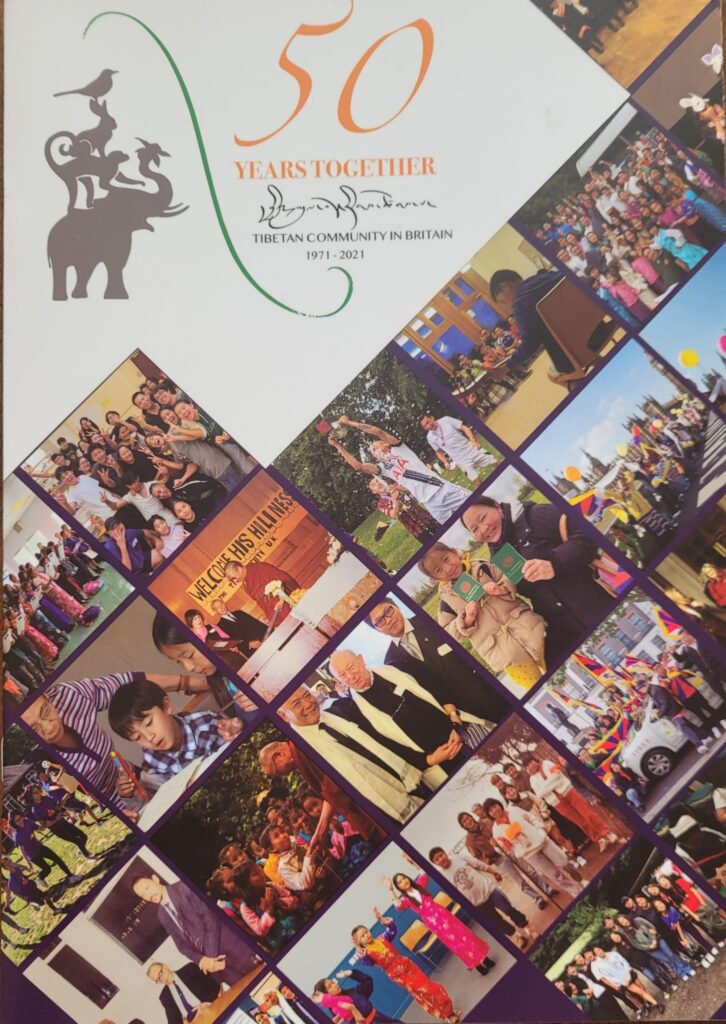 A poster commemorating 50th anniversary of the founding of Tibetan community in Britain.

The Tibetan community in Britain was officially established in 1971 by a handful of Tibetans residing in the UK, one of the founding members included Kasur Tashi Wangdi now based in Canada.

TCB commemorated this special occasion over the weekend on September 4 with around 300 Tibetans and friends of Tibetan community. The event was attended by distinguished guests including current and former Office of Tibet Representatives Mr Sonam Tsering Frasi and Madam Kasur Kesang Yangkyi Takla respectively; long standing Tibet friends John Billington; Zara Flemming; and staff from Free Tibet, International Tibet Network and Students for a Free Tibet.

It was an evening full of reflection, unity, laughter but most of all it was a boost of strength and hope for the future.

Representative Mr. Sonam Frasi opened the evening with a brief look back at how the community was formed and those who played a part in its birth in 1971, right up to today. He also emphasized the importance of young leaders taking on key roles in the community to ensure creativity, strength and strong leadership to maintain unity and togetherness but also to keep the Tibet China conflict front and centre.

Pema Yoko, Tibetan Community in Britain’s chairperson, shared her experience of growing up in London and thanked all those for their contribution to the community from Tibetan language and performing arts teachers to political activists. She mentioned that everything that she is today was inspired by the Tibetan Community she grew up in, that it is because of the strong, loving, and determined people that she knew as child, made her who she is today. She talked about the importance of creating space, and opportunity for the younger generation to share their thoughts and experiences on Tibet and issues they care about. “It is vital we give them a platform to come together and voice their opinions and experiences, it is our job to empower our youth for a stronger Tibet, just as our elders did for us,” she said.

The commemoration was a celebration of a generation of leadership, commitment, and vision that has helped build such a dynamic and unifying Tibetan community here in Great Britain. Throughout the month of September TCB has been highlighting and paying gratitude to all those who have contributed towards TCB through online video messages on their Facebook page. They have also published a small brochure to mark the occasion with a special message from His Holiness the 14th Dalai Lama. TCB board were thrilled and deeply grateful for the auspicious message from His Holiness.

The occasion was also a reminder that Tibet is not free from Chinese occupation. Before the main programme, TCB Youth Coordinator, Tenzin Wangdu, organized a 4-hour youth leadership training attended by around 18-20 young students from the community. The training, led by Students for a Free Tibet reflected TCB’s decades-long vision of passing down not only culture and language, but also the spirit of resistance and hope for a free Tibet to future generations of Tibetan youth in the UK.

During the main programme, John Billington shared his own words of support for the community, recalling the nostalgia of his first interactions with the Tibetan community and sharing a couple of his learnings and observations from his five decades of experience with the community. Billington shared the story of his time in Tibet, when he was circumambulating the Barkhor. Despite the never-ending cruelty of the CCP towards the Tibetan people, John recalled when he saw an injured Chinese man in Lhasa. The man painfully made his way through Lhasa towards the Barkhor where many Tibetans would reside and frequent in search of compassion. The Tibetan people, even after all they had been through at the hands of the Chinese, came together to care for the injured Chinese man. In the centre of Stratford, London, years later, John recounted this story of the precise moment he knew just how special the Tibetan people were and why efforts to preserve the Tibetan culture, way of life, and compassion were so important, not only for the people of Tibet but for the international community at large.

The 50th anniversary programme was celebrated by many with attendees applauding the outstanding programme set by the TCB board members as well as the general organising of the event. A group of Tibetan nurses volunteered their time to ensure the event was Covid-19 safe by testing every single guest on entry. This was not an easy task but they worked around the clock to ensure everyone was safe and secure. The Tibetan Community in Britain sends their deepest gratitude to the amazing performers for entertaining the audiences and thanked all the sponsors, volunteers, Tibetan nurses and kitchen staffs for their dedication and service and most of all their attendees for making the evening a one to remember. Without them all it wouldn’t be possible.

-Filed by Tibetan community in Britain 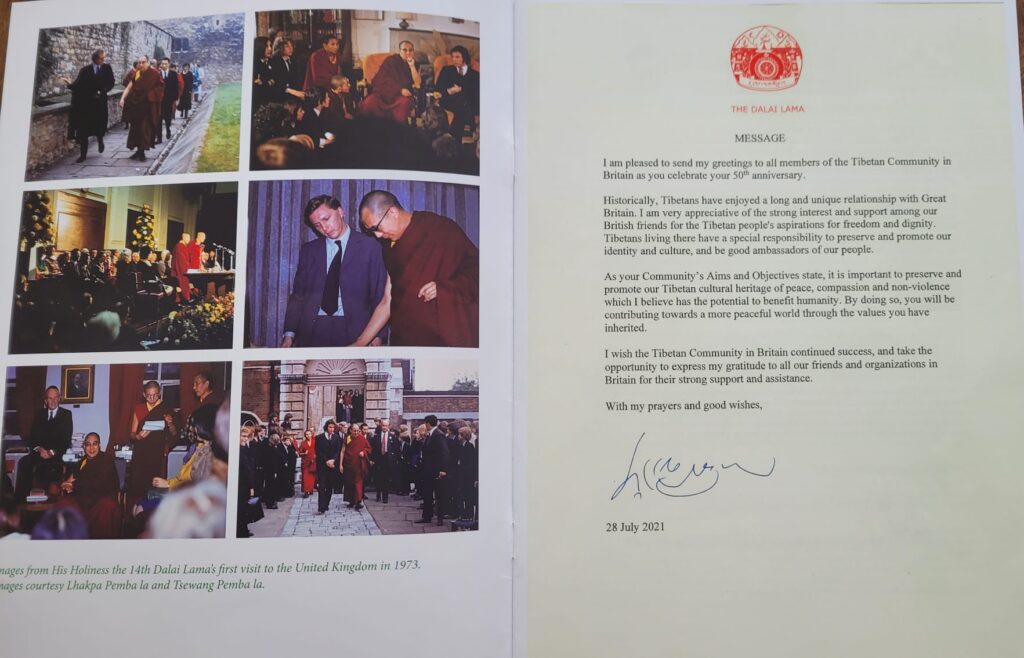 A small brochure to mark the occasion with a special message from His Holiness the 14th Dalai Lama. 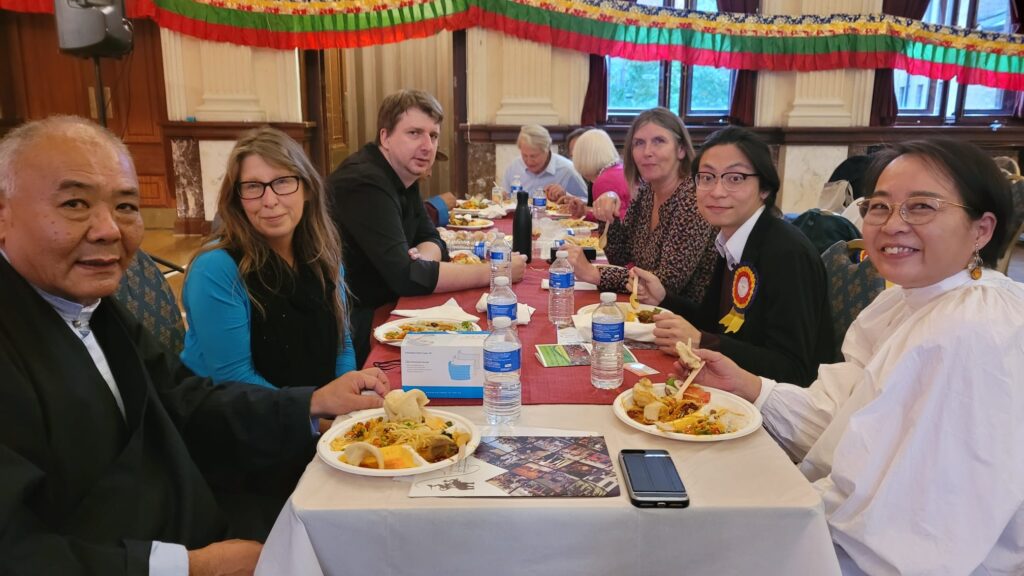 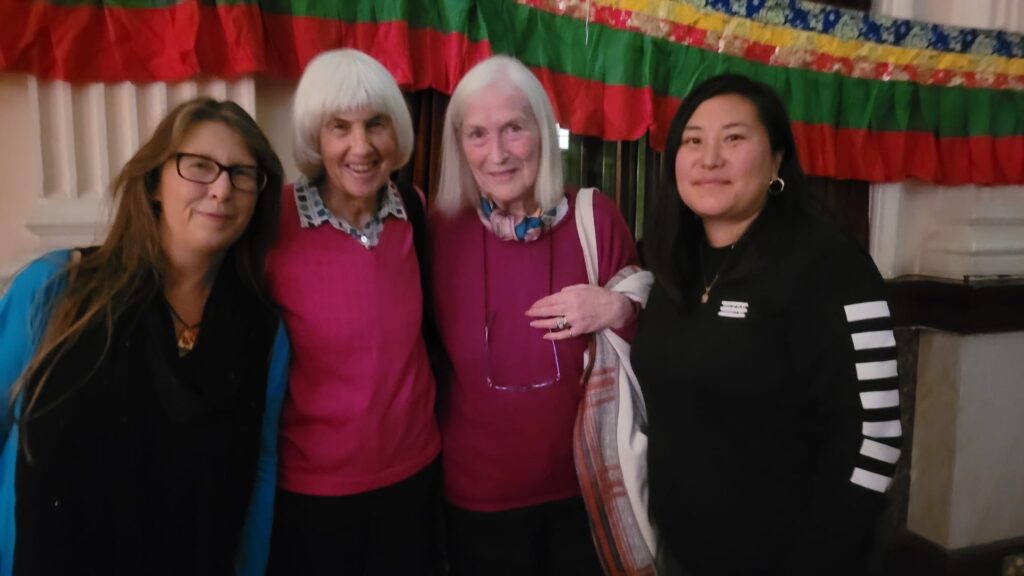 TCB Chair Pema Yoko with the Tibet supporters at the gathering 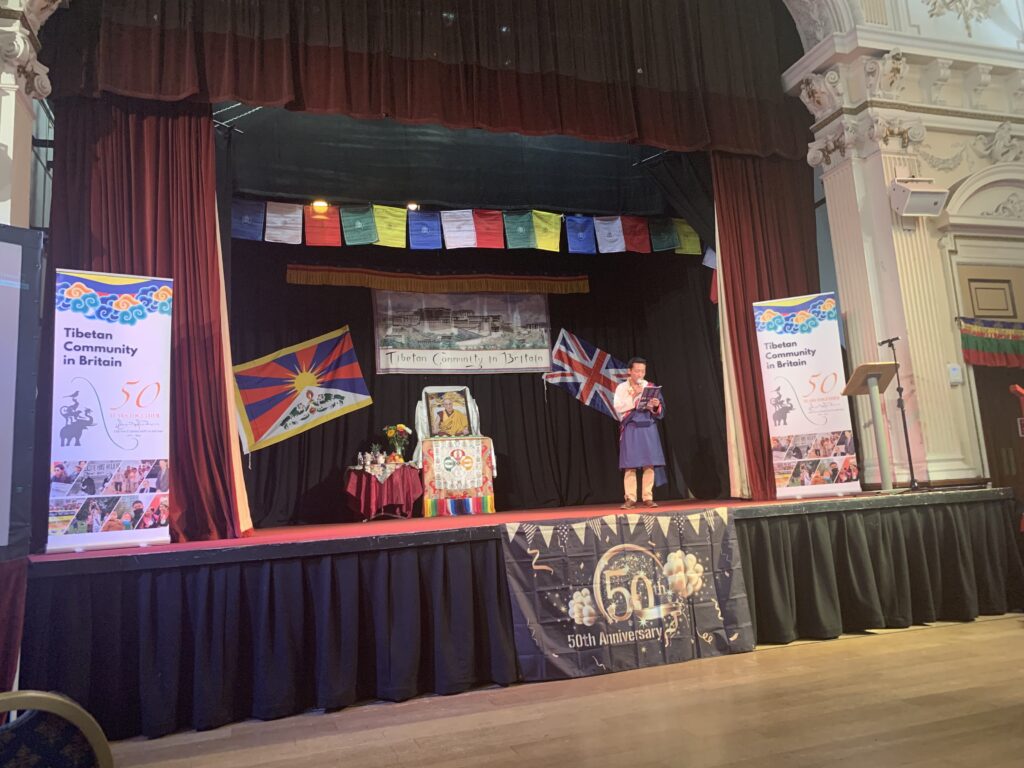 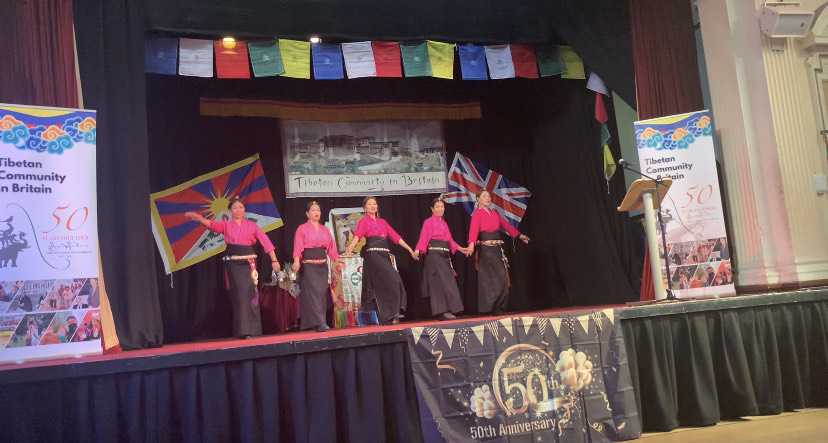 A cultural performance marks the event. 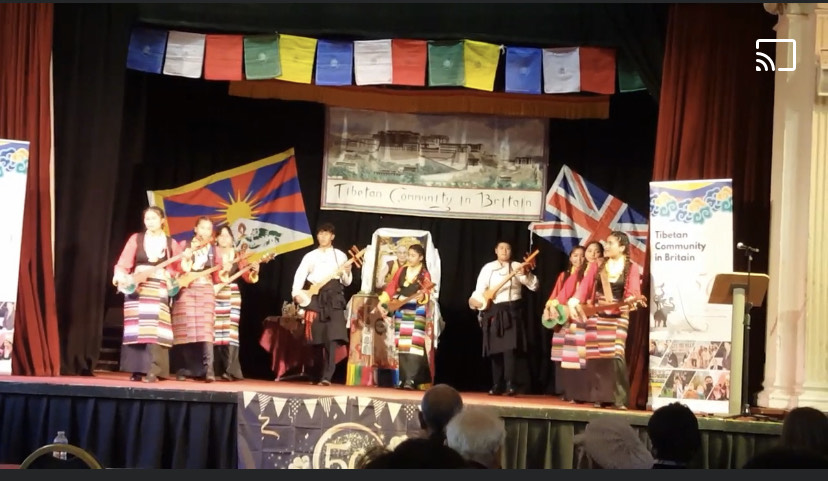 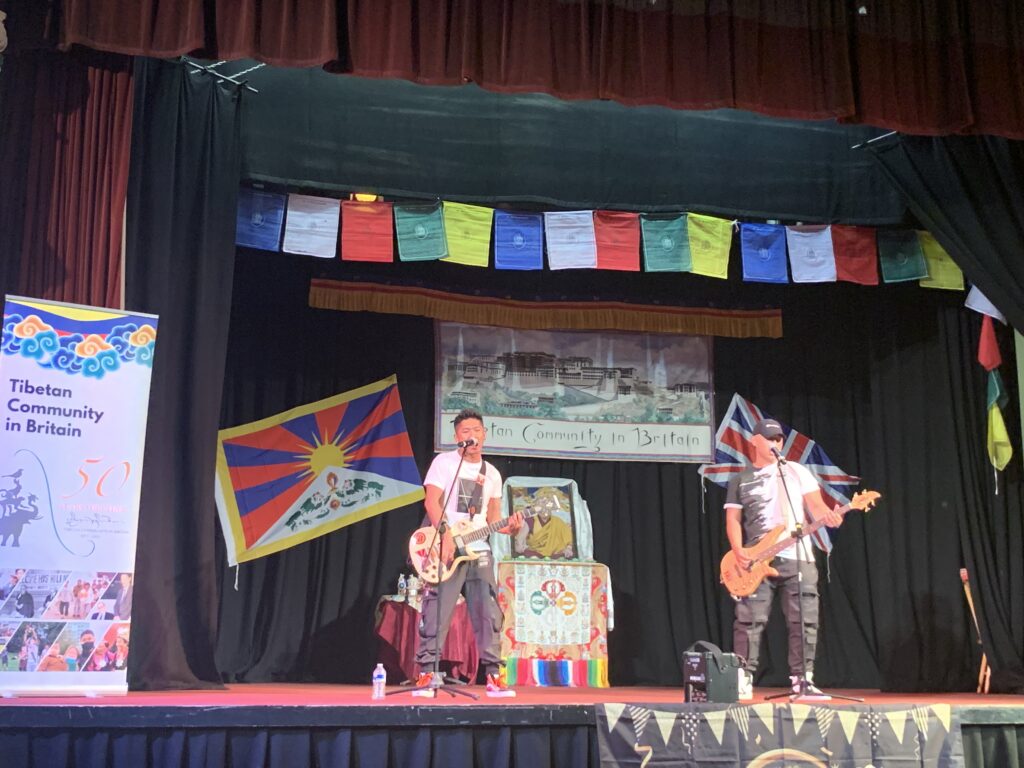 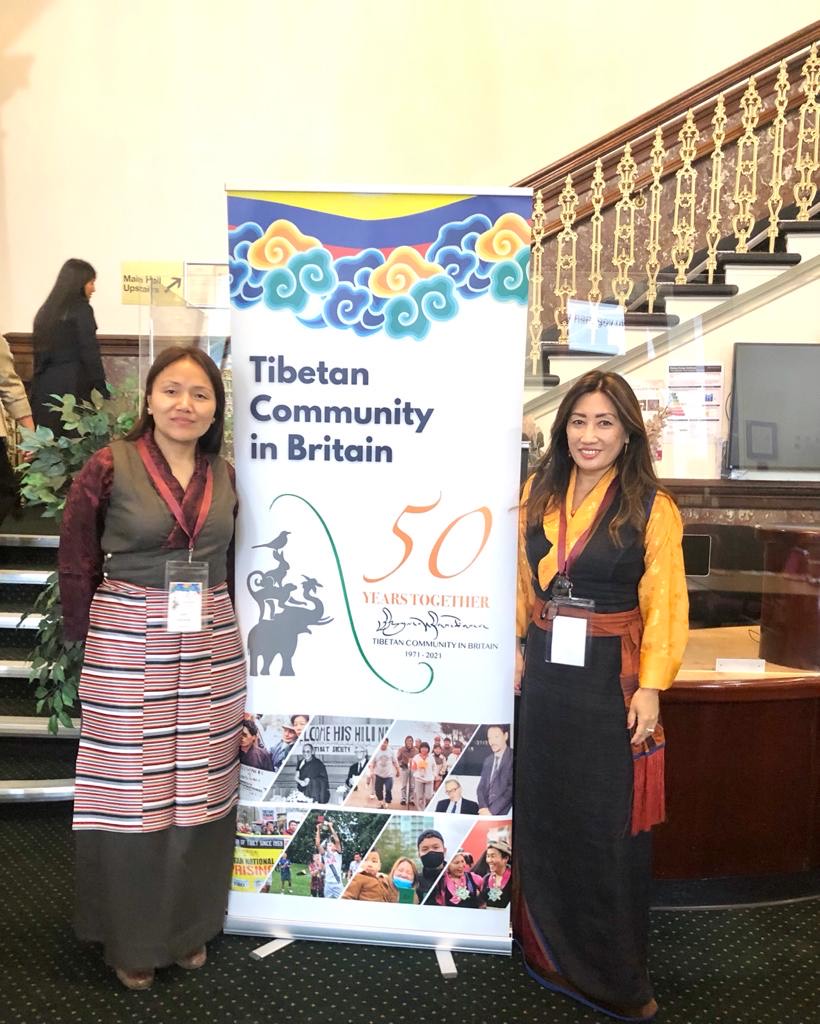