International Campaign for Tibet. March 27, 2020. Read original news here.
A Chinese government committee relaxed its quarantine policy in the Tibetan capital Lhasa this week, in the midst of Beijing’s campaign to repair China’s economy and reputation around the world in the wake of the global COVID-19 outbreak.

The official notice from the Lhasa City Epidemic Prevention and Control Leading Committee, dated March 23, says that people from “low-risk” areas who are quarantined in hotels or elsewhere can move outside if they have already been in quarantine for a week. 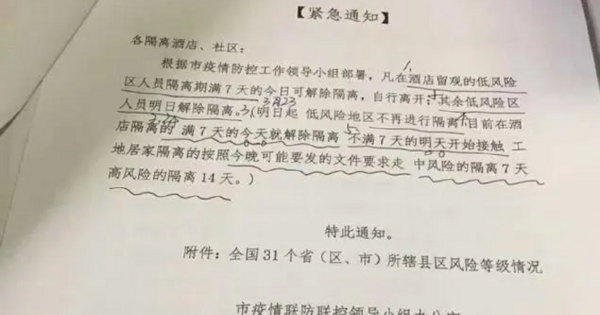 An image of the announcement.

Although the notice does not say how the categorization of the risks will be done, the New York Times has reported that the Chinese authorities, as part of its overall coronavirus surveillance plan, will be using a controversial, color-coded QR scan system that depicts an individual’s health status based on their travel history, place of origin, etc.

According to the New York Times analysis, the software “appears to share information with the police, setting a template for new forms of automated social control that could persist long after the epidemic subsides.”

Tibet, a historically independent country that China annexed in 1959 and continues to rule over with an iron fist. is already one of the most controlled and least free places on Earth.

Conveniently for the Chinese government, the coronavirus outbreak coincided with the most sensitive time on the calendar in Tibet. The month of March includes the anniversaries of the 1959 Tibetan Uprising against Chinese rule, the Dalai Lama’s escape into exile that year and the mass protests that spread across the Tibetan Plateau in 2008.

Since the 2008 protests, the Chinese government has closed the Tibet Autonomous Region—which spans much of western and central Tibet— to foreigners for at least one month every year around this time. In 2019, the region was closed from Jan. 30 until April 1.

Even when there are no sensitive anniversaries on the calendar, China severely restricts foreigners’ access to Tibet.

In late 2018, the US Congress passed the Reciprocal Access to Tibet Act, which forbids entry to the US by the Chinese officials directly responsible for keeping American journalists, diplomats and ordinary citizens out of Tibet.

The State Department is soon expected to release a report on the status of access to Tibet, including identifying Chinese officials responsible for denying permission for Americans.

In eastern Tibet, local Tibetans told Radio Free Asia that authorities in the Kardze (Chinese: Ganzi) Tibetan Autonomous Prefecture, located in the province of Sichuan, are reopening tourist sites there, causing them to fear a second wave of COVID-19.

The RFA report quotes a Tibetan living in Dartsedo (Ch: Kangding) as saying, “We are still scared of the virus. We have self-quarantined and hardly go out, and if we do, we wear facemasks. But now that they are reopening the tourist sites in Kardze, hundreds of [Han] Chinese visitors are coming into our area every day. It is very concerning because just one of those tourists can start the spread the coronavirus here again.”

The International Campaign for Tibet translated into English the official notice from the Lhasa City Epidemic Prevention and Control Leading Committee:

To all the hotels and communities under quarantine: