Washington DC: As per the guidance from the Central Tibetan Administration, Tibetan Associations in the United States donated a check of US Dollars $35,131 to Meals on Wheels America, a reputable NGO that provides food to the poor, disabled, and vulnerable people during the Covid-19 pandemic.

In a letter to the President & CEO of Meals on Wheels, Ellie Hollander, Representative Ngodup Tsering mentioned that “on behalf of Tibetans in United States I am happy to present this small contribution as a gesture of expressing our gratitude and solidarity, to the people and Government of the United States, during this difficult time, for the kindness and support extended to the Tibetans and the cause of Tibet.”

The letter recounts the Tibetan immigration process that started with the Immigration Act of 1990 which enabled over 20,000 Tibetan refugees to make this great nation their second home.

Meals on Wheels America is an American NGO that specializes in delivering meals to those who cannot, under various circumstances, obtain meals for themselves. The TAs chose this NGO since the pandemic has made daily activities, such as grocery shopping, a dangerous task, especially for those who are elderly and immunocompromised. The OoT later sent that letter of donation to the Congress, State Department and other relevant offices for their information. 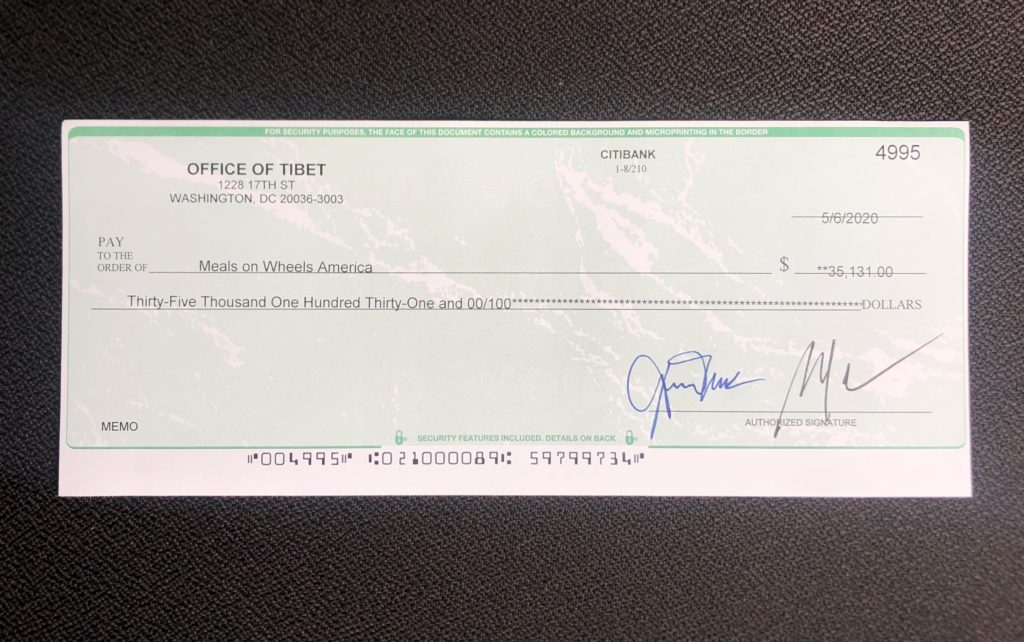 Letter from the CEO of Meals on Wheels America to Office of Tibet, DC