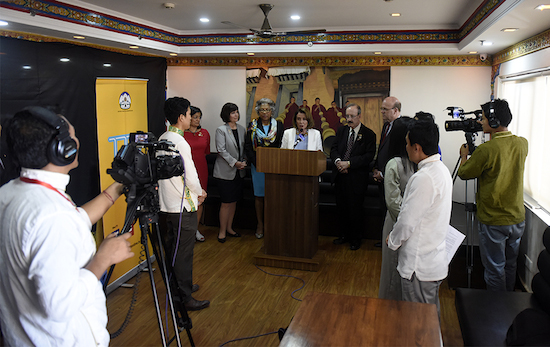 Below is the transcript of the interview

Editor Jamphel Shonu: Leader Nancy Pelosi, you have been one of the strongest and most steadfast supporters of the Tibetan people in the US Congress and a true friend of His Holiness the Dalai Lama and the Tibetan people. This is the second US congressional delegation led by you to Dharamshala with the earlier visit in March 2008. What is your message to the Tibetan people especially to Tibetans inside Tibet? Why is Tibet close to your heart and how do we ensure that Tibet and respect for human rights continues to be a top priority in US-China relations?

Leader Nancy Pelosi: I think I’d speak for all Americans when I say that we share the values of His Holiness. The initiative to preserve the Tibetan culture, religion and language is not just about Tibetans. It’s about the dignity of every person in the world and that is His Holiness’ message that has attracted so many of us. Thank you.

Editor Jamphel Shonu: Representative Eliot Engel, you helped introduce a resolution in 2015 calling for substantive dialogue between Tibetan and Chinese representatives. Since 2010, the Sino-Tibetan dialogue has stalled after nine rounds of official talks. What can the U.S. Government do to encourage resumption of the dialogue process?

Representative Eliot Engel: The American government can do what we have done so many times in the past is that raise these concerns with Chinese officials. I think it is important that we introduce legislation and we let the Beijing government know that we are not going to turn our backs on the Tibetan people. Our president has proposed some cuts in USAID. I am opposed to those cuts and there are many reasons but one of the big reasons is just looking around here and seeing so many Tibetan people that are relying on the partnership with United States. So I just want to, in closing, that all of us here are totally committed to strengthening the relationship and sending a message to those who run the People’s Republic of China that we are never going to forget the Tibetan people.

Editor Jamphel Shonu: Representative McGovern, as the Co-Chair of the Tom Lantos Human Rights Commission and an ardent defender of international human rights you have been one of the most vocal and strong supporter of Tibet and the Tibetan people in the US Congress. You were also part of the congressional delegation that visited Tibet in 2015.  Moreover, you have introduced the Reciprocal Access to Tibet Act in the House aimed at reciprocity from China allowing US citizens including Tibetan-American access into Tibet, which otherwise is off limits for American citizens, including diplomats, politicians, non-governmental organizations, and journalists. In light of that, I want to ask you do you foresee another congressional visit to Tibet in the near future?

Representative Jim McGovern: We all would love to go back to Tibet. I am not sure that Chinese government would give us a visa. But the bottom line is I introduced the legislation because I believe there has to be a consequence to Chinese repressive policies against Tibetan population. I am happy to be here with my colleagues. We are here because we stand with His Holiness the Dalai Lama. We stand with what he believes in and we stand with all Tibetans.

Editor Jamphel Shonu: Representatives McCollum, Chu, Betty and Jayapal, a very warm welcome to you all to Dharamshala. I wanted to ask you in what ways can the U.S. government invest in Tibetan leadership, particularly with regard to encouraging women achieve new heights in Tibetan governance, leadership and politics?

Representative Betty McCollum: We were just so impressed to see all the young girls at the school we went to yesterday; the three-year-old to the young women who were seniors. So education and work that is happening here to make sure that girls and boys have good quality education is paramount to the success of Tibetan people in the diaspora, but is also going to be of great help in reaching back to Tibetans in China and showing enlightenment for the women to be able to fully participate in their society. Thank you.

Rep Judy Chu: I was so inspired by the dialogue with Tibetan women leaders yesterday. They presented us with a ten-point program. I was very thrilled. I was so pleased and impressed by the fact that they thought so much about how they could advance the status of women in the Tibetan community. I want to support that as much possible and I think many Americans would.

Representative Joyce Beatty: I join my colleagues and yesterday widened my appreciation for how we can have women in media, women in education and also one of the things we talked about this morning with USAID was how we can be more helpful with technology so they can not only see women like leader Pelosi and us, but it can be a hope for them.

Representative Pramila Jayapal: We are so fortunate to have the first women speaker in the history of the United States Congress with us on this delegation as our leader. She always does make it a point to make sure that we are bringing women with us on these delegations but also that we meet with women representatives because one of the things we have to do is just continue to raise the prominence of women’s issues in our overall dialogue and to remind all women out there that there is no path that’s not possible and that we want to do everything we can do to continue to strengthen human right of women but also the ability of people to forge any path they dream for themselves.

Leader Nancy Pelosi: We were very impressed by the proposal and look forward to working with the women here as they have sent us a letter to that effect.

Editor Jamphel Shonu: Thank you very much Leader Pelosi and the representatives for making time for Tibet TV.