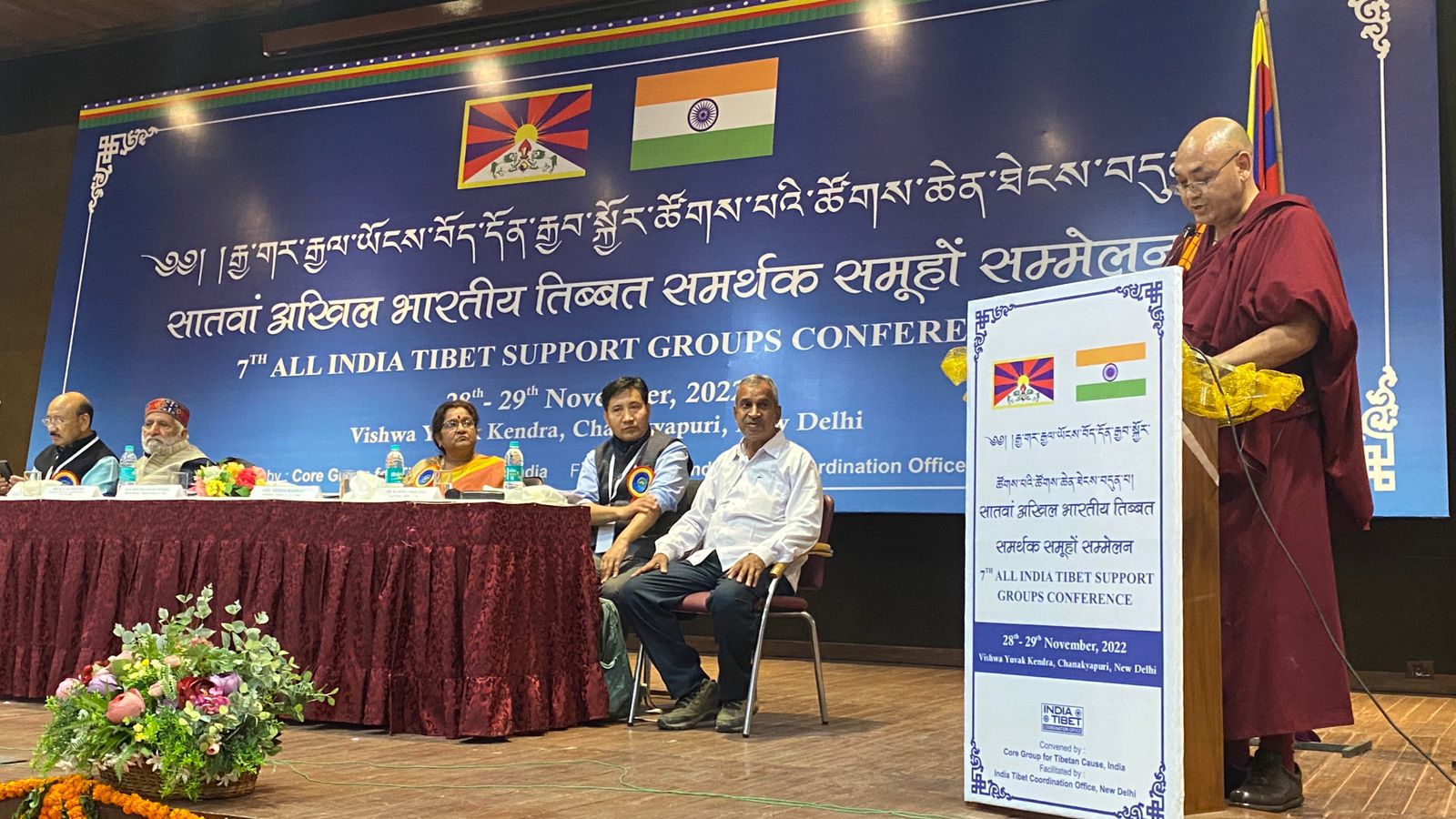 Delhi: The two-day conference of Pan India Tibet Support Groups held in Delhi concluded today with the adoption of many notable declarations pursuant to the Tibet Policy and Support Act 2020 passed by the US Congress. The declarations adopted today serve as a roadmap to induce clear policies on Tibet by the government of India. Read the declaration here.

Some of the significant demands of the representatives include the Indian government’s recognition of the Central Tibetan Administration as the legitimate representative of Tibetans worldwide while ushering complete support of the Middle Way Approach of the CTA in resolving the enduring Sino-Tibet conflict. In addition, the delegates petitioned to denounce China’s intervention in the reincarnation of Tibetan tulkus and called for more political involvement or support to defend the national identity of the Tibetan people.

The Speaker of the Tibetan Parliament lauded the Core Group for Tibetan Cause’s leadership in ensuring the Tibetan movement’s sustenance. He acknowledged in gratitude India’s considerable support to Tibetans for the last 60-plus years, adding, “India is the only country who held our hand when we needed it the most; therefore, we are indebted to the Indian government and its people,”.

While the Tibetan cause continues to receive ample support from governments and policymakers worldwide, many still view Tibet as an internal affair of China. The Speaker warned that accepting the legitimacy of China’s claim over Tibet is to breach international human rights law. He further cautioned India about China’s capability to stretch its authoritarian regime beyond Tibet, which they have repeatedly demonstrated through incursions and military confrontations at the Indo-Tibet border. He pointed out that so long Tibetan issue remains unresolved, India’s long-standing border clash with China will remain undeterred.

“The centrality of Tibet is a key factor in resolving the China-India conflict. Therefore India can’t avoid Tibet as Tibet remains the key factor in the Sino-Indian conflict. Therefore, the need to resolve the issue of Tibet is imperative for India’s stability and peace with China,” he said. Speaker also underscored the threat of China’s hunger for global domination and its pursuit of expansive goals, urging India and the neighbouring Asian countries to form a multilateral alliance to counter China.

Being the primary source of ten major rivers, Tibet supports the lifeline of over 1.9 billion people in South and South East Asia, including India and China. However, because of the global rise in temperature, the Tibetan plateau has recorded a significant temperature increase over the last decade. Underlining the deteriorating environmental situation inside Tibet, Secretary Choeying strongly urged global initiative in calling out China for indiscriminately destroying the ecology of the Tibetan plateau under the guise of ‘development’. He cautioned India to pay considerable attention to the rejuvenation and revitalisation of Tibet’s ecology and perhaps prioritise this concern in their policies on China.

“Ecology is not a political subject per se, yet it remains an integral subject of political discourse when we face transnational and transregional challenges due to ecological disturbances,” said the Secretary of the DIIR and additionally demanded international scrutiny in the massive dams projects launched by China which he contended was an invitation for a grave ecological disaster. He supplements his statement with a presentation of the reality of Tibet’s ecology, detailing how the ecology of Tibet has worsened since its occupation by the PRC. He spoke about the geopolitical tensions China has created with Tibet’s bordering nations which once used to be a demilitarised zone of peace.

Besides the ecological concerns, Secretary Choeying directed the gathering’s focus on the existential threat caused by China’s belligerent policies in Tibet, reflected through the extermination Tibetan language, culture, and national identity. And most recently, the prevalence of colonial boarding schools, coercive measures of collecting mass DNA samplings etc., are some of the excessive violations of the Tibetan people’s fundamental human rights.

“Rather than fulfilling the aspirations of the Tibetan people inside Tibet,  China is consumed by the colonial mindset of securing their illegitimate rule over Tibet,” asserts Secretary Choeying. For Tibetans now, he noted,  their friendship with India and the latter’s support for Tibet’s truth and just cause reassures the Tibetan people to continue their non-violent struggle against China’s iron fist.

Dr K.C Agnihotri claimed Tibet’s occupation by China as one of the most regrettable days in the history of India, which could have been avoided if it weren’t for India’s negligence. Whether it was fear or appeasing the Chinese government, he affirmed it was a grave mistake to let China occupy Tibet. Because of India’s failure then, the constant fear being crept in by China’s military incursions along the Indo-Tibet border is undoubtedly the price India is paying, he added while recounting the period of peace along the edges before Tibet was invaded.

“When Tibet wasn’t occupied, no security concerns daunted India to guard their border with Tibet, which is a stark contradiction today, as more money and resources are spent by India on border security,” said the former Vice-Chancellor.

While the statehood and nationality of countries like India and several others are directly associated with land, he reiterated the case to be different for Tibetan people as he pointed out the association of their national identity to be linked to His Holiness the Dalai Lama. Because of this, when the Chinese military invasion of Tibet started gaining momentum, the Tibetan people’s immediate concern was the safety of His Holiness. Therefore, so long as Tibetans are emotionally and spiritually attached to His Holiness the Dalai Lama, the Speaker noted, “China’s attempt to exterminate the national identity of Tibetans is futile”.

Dr Neerja Madhav spoke about how her involvement with the Tibetan cause developed through Geshe Jumpa, her first writing on the problem of Tibetan refugees living in India, including their social and political angst. Since then, she has decided to use her skills in writing as a medium to raise awareness about the Tibetan issue. Through her written materials, Dr Neerja Madhav has consistently urged the Indian government to break its silence on the cultural genocide in Tibet and speak on the human rights violations of Tibetan people. 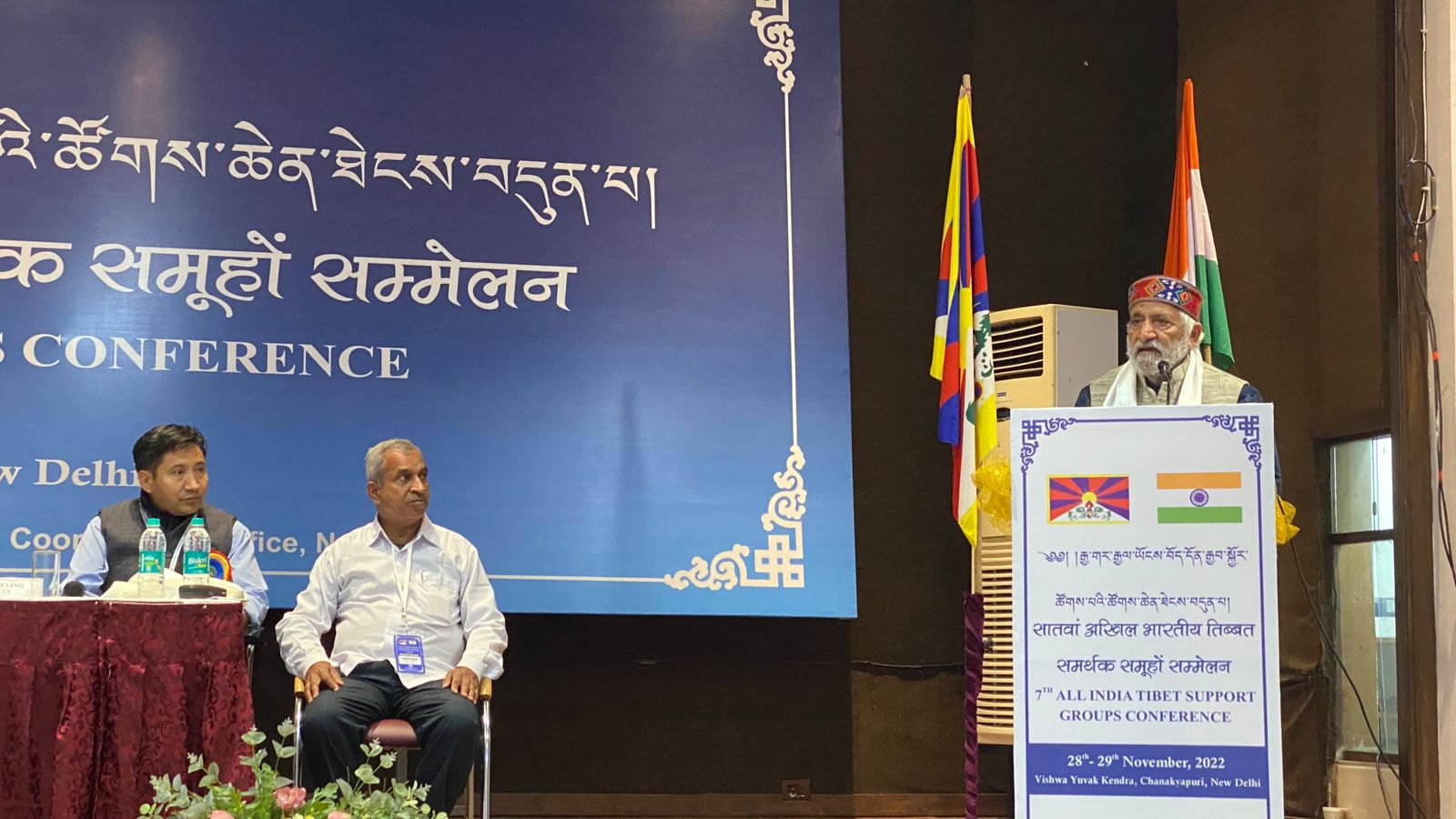 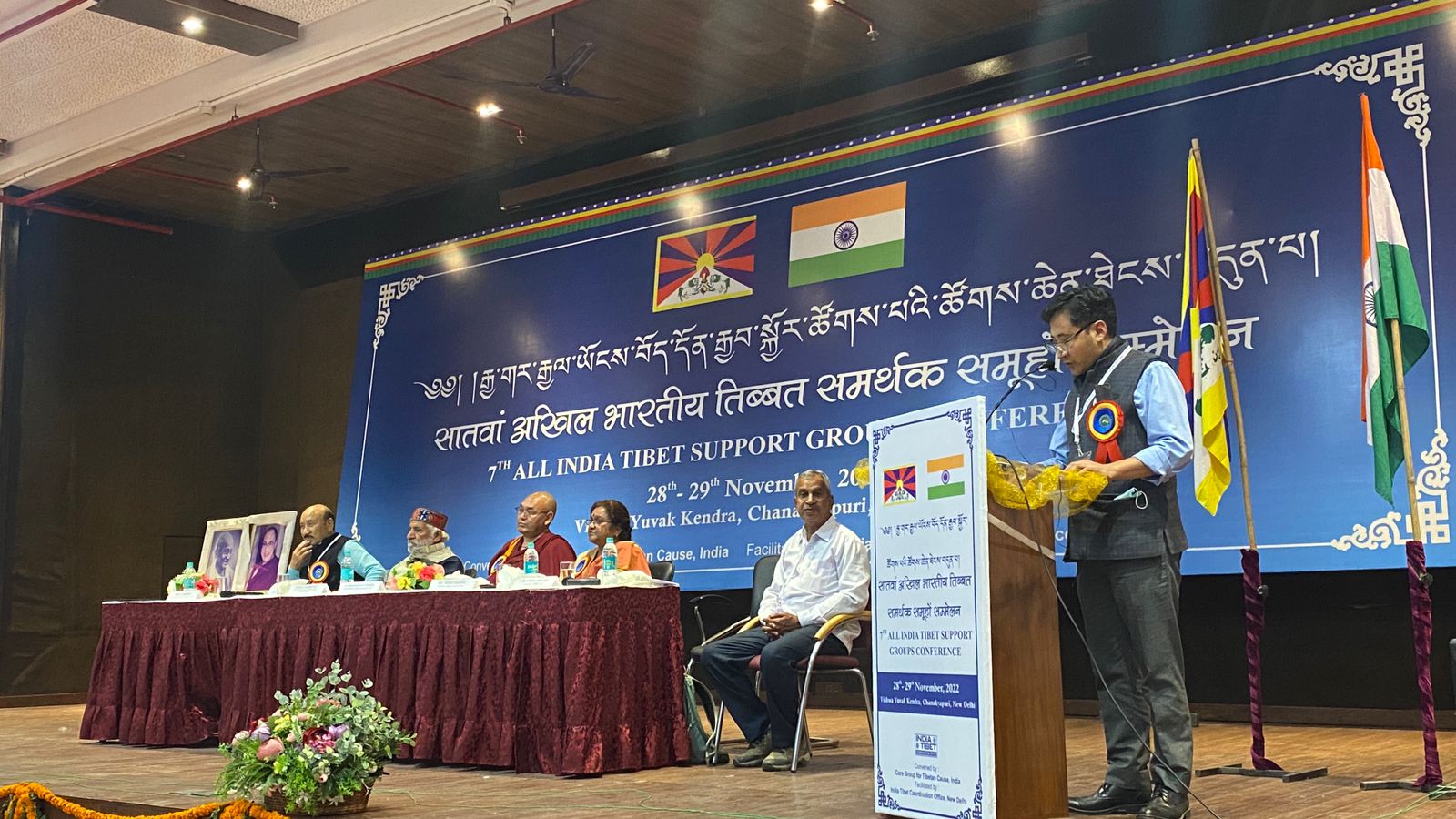 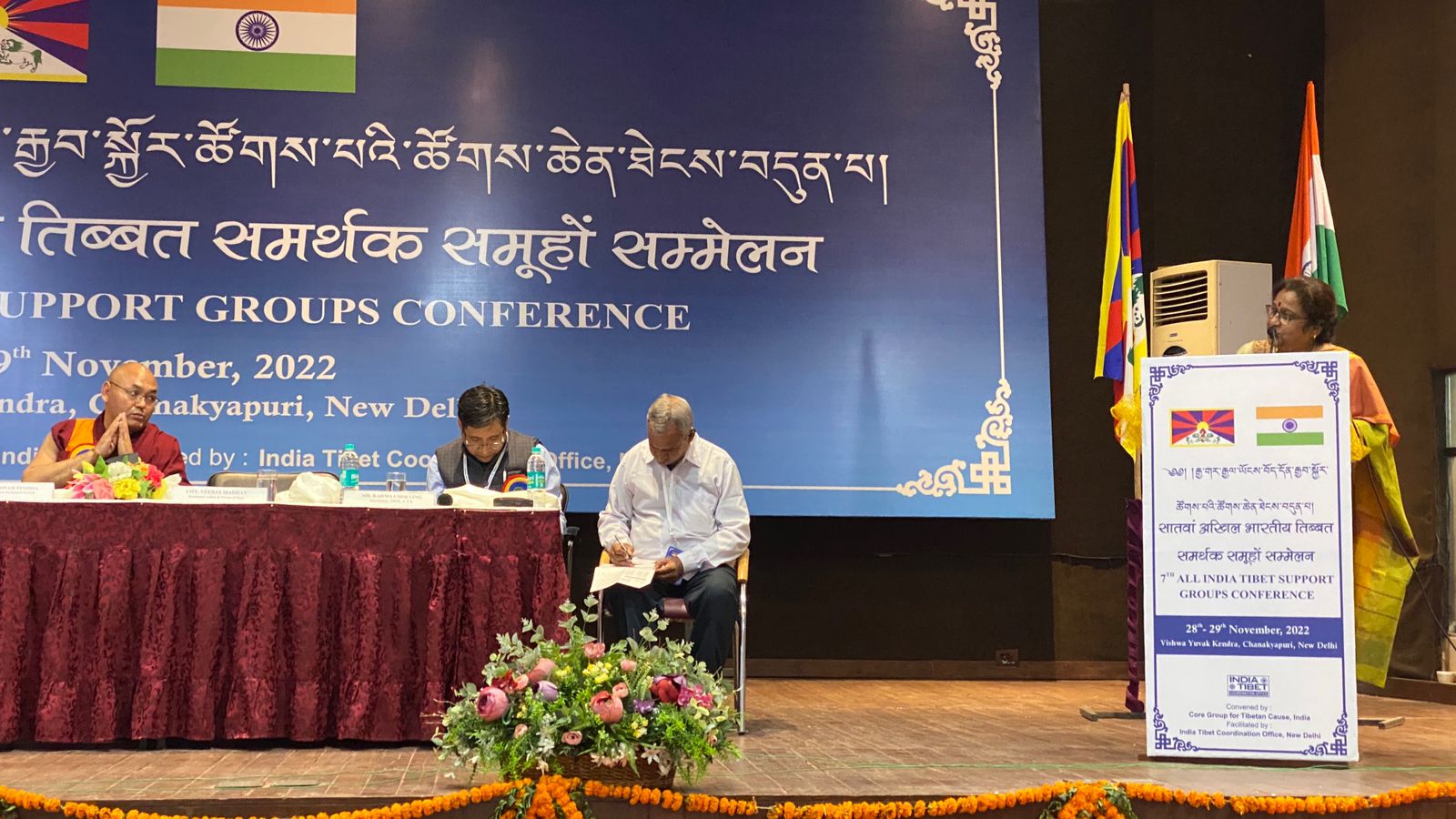 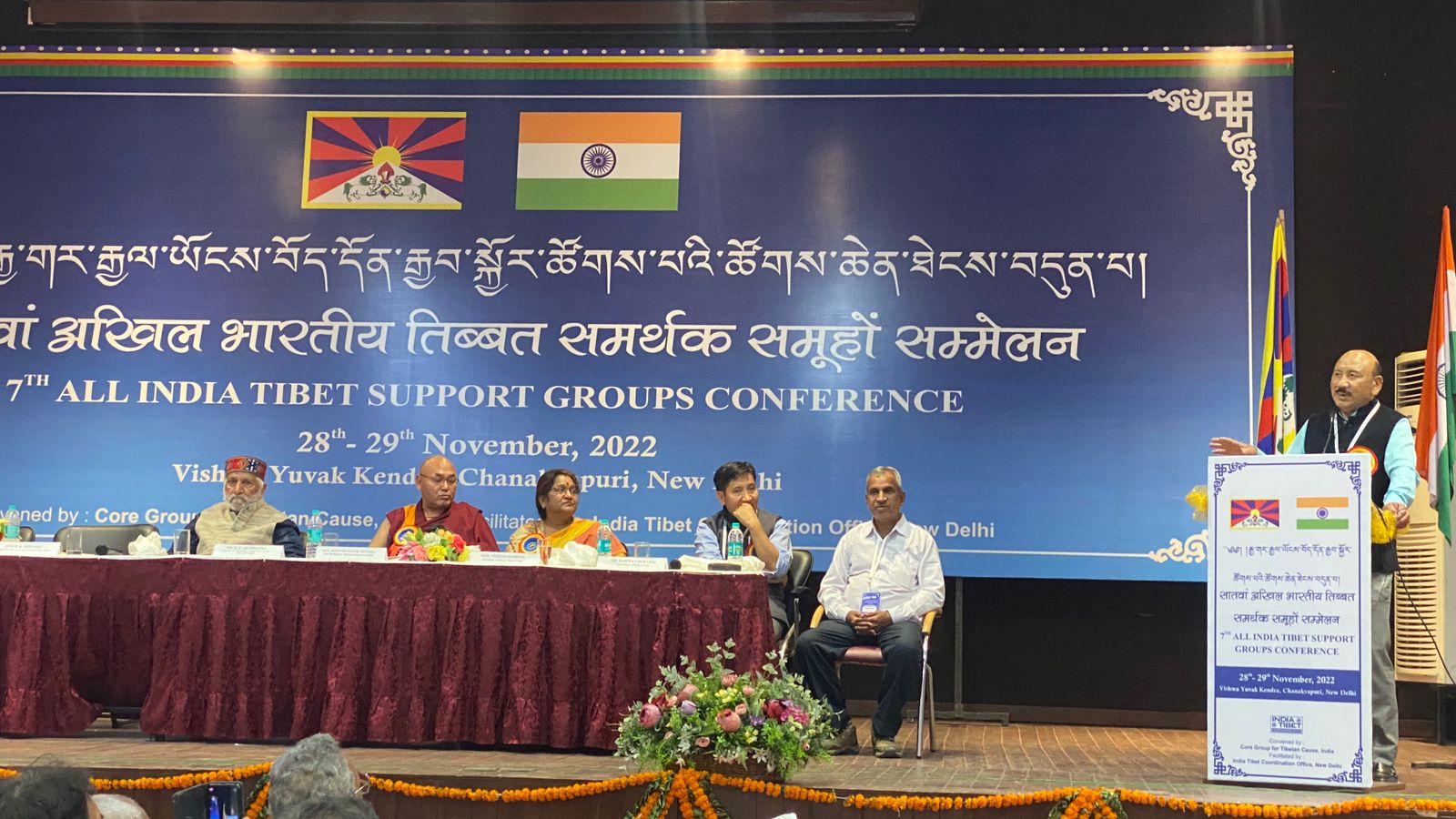